Last week was a pretty good one for fishing, particularly on the Southwest Miramichi where many anglers limited out.  Rain early this week brought the water levels up, but conditions should be very good for the weekend.  There are reports on good numbers of fish around.

Doug White’s Tammerack Sports Fly Shop in Juniper said with the recent raise of water, fishing has picked up, but very few fish showing. The water is dropping again already so I suppose there will be a slump again.

Flies of choice: Green Machines, Willie Whiskers, Jigaboos, Bombers. Sizes vary according to how fast the water drops. One lad says he started through the pool with a 4 and ended up with size 8 at the bottom.

W. W. Doak and Sons in Doaktown said last week was a good week for fishing with a good number of hook-ups.  The weekend rain slowed things a bit, but the water was welcomed and conditions should be great for the weekend as water levels drop and adjust.  There had been a 20-inch raise in Doaktown, and a 40 –inch raise in Blackville.

Flies of choice were Stone Flies, White-tailed Green Machines, Shady Ladies and some patterns which had orange in them early this week before the water had cleared.

Derek Munn of Ledges Inn in Doaktown and Mountain Channel in the Rapids area said last week had been a very good week with many anglers limiting out.  Munn had counted 125 fish hooked between Sunday to Saturday.  The rain early this week slows things a bit, but they were still picking up some fish.  There was a good mix of salmon and grilse.  With about a two-foot raise in water, fishing conditions should be good until the end of the month.

Flies of choice were Same-Thing-Murrays, Undertakers, Smurfs, Bombers and even a few General Practitioners.

Herb Barry Sr. of Herb’s Fly Shop on the Station Road in Blackville said he’d heard of a lot of fish around both on the Main Southwest and on the Bartholomew, and the catching was good.  The water was quite high earlier this week, but good for the high-water pools.

Curtis Miramichi River Outfitting in Blackville said there were lots of fish around, but the water was very high early to mid-week.  They felt that conditions should be very good for the weekend.  There was a good mix of salmon and grilse being caught.

Jim Laws of Miramichi Hunting and Fishing in Newcastle, Miramichi reported that there were good numbers of fish around, particularly on the Southwest Miramichi and good numbers being caught.  Presently, the water was high, but conditions should be good for the weekend.

Syd Matchett of Trout Brook Fly Shop on the Northwest Miramichi said angling was not bad.  Gordon Day and his fishing buddy Joe each had caught a fish Saturday at Wayerton, and saw three more salmon.  Rain early this week brought the river up 10 to 12 inches.

Flies of choice were Undertakers, Shady Ladies and Bear Hairs on nos. 8-10 hooks, but after the rain sizes 4 & 6 hooks.

Debbie Norton of Upper Oxbow Outdoor Adventures on the Little Southwest Miramichi said fishing was quite good last with about 18 fish caught, but it slowed after the rain produced high water. Conditions should be more favourable as the water drops.

So as the water levels drop, conditions for the weekend should be much improved to get out and “on the water”.

Thought for the Week: “How far a fisherman stretches the truth depends on the length of his arms.”    -Ed O’Brien 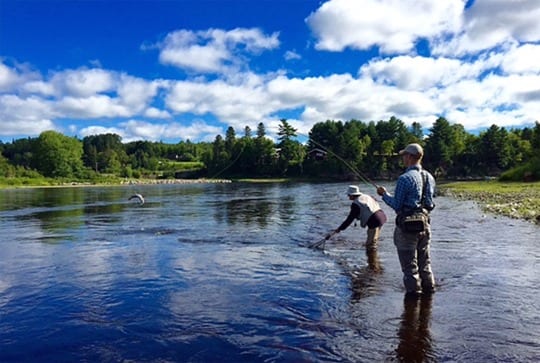 Another glorious week on the Miramichi River!!…. with limits all around…we were blessed with a fresh run of fish having entered the pool on this day, several with sea lice still on them, powerful fighters! 10 pounds of fresh leaping silver captured in its gleaming airborne arc!

Bill & Lisa Haldane had a great trip at Ledges last week with their two daughters and son-in-law. 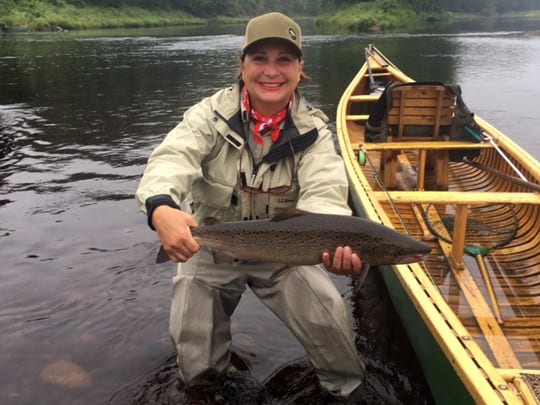 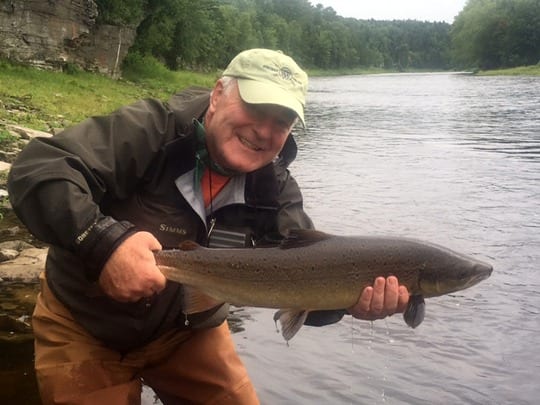