October 5, 2016/Giv'er Miramichi/Be the first to comment/Sports, The River Valley 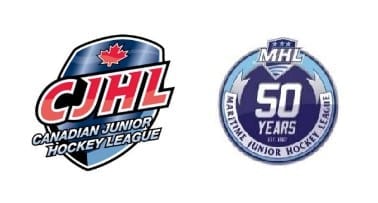 The latest edition of the CJHL Top 20 Weekly Rankings were released Monday, with three teams representing the MHL. The Yarmouth Mariners remain in the upper echelon of the list while this week being joined by the Miramichi Timberwolves. The Pictou County Weeks Crushers also gain recognition as an Honourable Mention.

The Mariners, who move up one spot to number three in the rankings, won their lone game this past week to remain one of only four undefeated teams in the CJHL at 7-0. Yarmouth was at home on Friday night to the Dieppe Commandos and did not disappoint, maintaining their winning ways with a 5-2 victory. Recently named Rookie of the Month Andrew Martell led the way with the game winning and insurance goals while also being named the game’s first star. Laurie Barron’s crew sit tied for the league lead in points with Miramichi at 14, though Yarmouth holds a game in hand over the T-Wolves.

This week, the Mariners wrap up their home stand with a Friday night matchup with the Amherst Ramblers at 7:30 PM before heading to the Truro to participate in the MHL Showcase with games on Sunday afternoon versus the Ramblers (12:00 PM) and Monday afternoon against the South Shore Lumberjacks (1:30 PM). 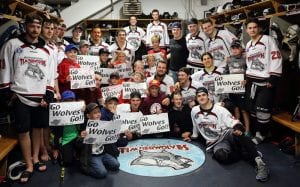 The Timberwolves have risen to the top of the Eastlink North Division standings and have gained recognition from the CJHL as a result, coming in at number ten for this week’s rankings. The T-Wolves went 2-0 on the week. On Friday night at home, they rode a 5-0 first period lead and multi-point efforts from seven different players to defeat the Summerside Western Capitals 8-3. The following night, Miramichi once again spread out the offense with six multi-point players and six different goal scorers in a 6-2 home ice victory over the Valley Wildcats. The victory was Miramichi’s seventh in a row. Although the season is not yet a full month old, Robert MacDonald’s charges already hold a seven point advantage over the second place Campbellton Tigers in the division.

The Timberwolves hit the road on Friday night when they take on the St. Stephen Aces in a 7PM start. After that, it’s off to Truro and the MHL Showcase where they’ll do battle with the Aces on Sunday at 7PM and the Campbellton Tigers on Monday at 12:00 PM.

Finally, the Pictou County Weeks Crushers have earned an Honorable Mention from the CJHL after going 2-1 on the week. After falling 4-1 to the Truro Bearcats at home on Thursday night, the defending MHL playoff champions got back to their winning ways with a 5-3 victory in Bridgewater over the South Shore Lumberjacks on Friday night. Recently named second star of the month for September Alexis Roy scored one and added a pair of assists in the win. The Crushers wrapped up their week with an 8-4 win in Amherst over the Ramblers on Saturday night. Both Roy and Jacob Hickey potted hat tricks in the victory that lifted Pictou County to a 6-1 record on the season.

Doug Doull’s crew now enter a busy time in their schedule. After playing the Valley Wildcats in a home and home series on Thursday night at home and Friday night in Berwick (both 7 PM starts), the Crushers head to the MHL Showcase in Truro where they will once again face the Wildcats on Sunday at 3:30 PM. Pictou County will close out their portion of the showcase by taking on the host team Bearcats on Monday at 3:30 PM.

Below are the latest CJHL Weekly Top 20 Rankings in their entirety:

About the Top 20 Rankings
The CJHL Top 20 weekly rankings are based upon a variety of factors, including the league in which the team plays, winning percentage, win-loss record, total points accumulated, goals-for versus goals-against ratio, etc.

About the CJHL
The Canadian Junior Hockey League is a national organization comprised of all 10 Junior ‘A’ hockey leagues in Canada. The CJHL represents more than 130 teams and 2,500 players and has over 2,800 former players furthering their hockey careers at the professional, major junior and college level across North America. For latest CJHL news and features, visit www.cjhlhockey.com and follow us on Twitter @cjhlhockey.