On May 19, 2017, it was announced that we would consider a new marine recreational licensing system in eastern Canada.

There’s general agreement that a licence would help improve stock assessments and promote sustainable management practices. Feedback is required to help with the proposal for a marine recreational fishing licence to identify gaps and provide input and local expertise.

Past actions
Between 2001 and 2005, we explored the possibility of a marine recreational fishing licence for groundfish in parts of Newfoundland and Labrador, and Quebec. In 2016, consultations were held on a proposal to introduce a licence and tags. Discussions have also been held with various groups on the benefits of a licence.

The results of these past actions demonstrate:

This consultation is looking for comments from stakeholders, including:

Some stocks are recovering (cod in Newfoundland and Labrador, striped bass in New Brunswick) and others require special attention (mackerel). Because of this, our proposal indicates that:

Feedback questions
We want to get your feedback on the following questions.

Face-to-face consultations will take place at various locations in eastern Canada until August 31, 2017. Dates and locations will be made available below as they’re confirmed.

If you want to participate in the consultation, you may:

Your feedback will be used to develop options going forward. 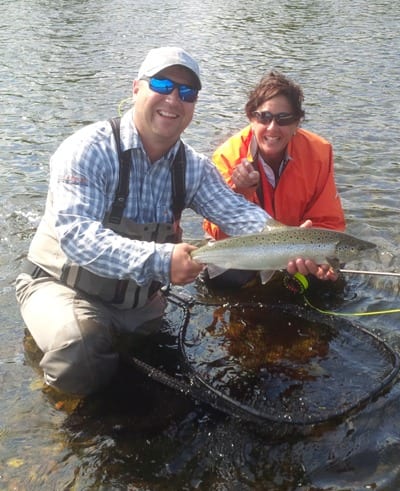 MIRAMICHI – Fishing continues to be slow on most parts of the river system. A little rain late last week resulted in a day or so of decent fishing, but it was not enough to make any significant difference. The rivers remain low and only the cooler nights and shorter days are keeping the morning temperatures of the water in the mid 60s Fahrenheit, but most days it climbs to mid 70s. A good day’s rain is desperately needed, or anglers are going to have to take a bucket of water with them when they go to the river.

W. W. Doak and Sons in Doaktown said fishing in the Doaktown area was slow and the water low with only a fish being caught here and there. Rain last weekend was very localized and didn’t have a lot of effect on the water height.

However, further up river angling was fairly good in holding pools with cooler water. Cooler nights are the saving grace.

Flies of choice were Bombers, some bugs and an odd Butterfly along with smaller dark patterns such as White-tailed Green Machines and Same-Thing-Murrays on nos. 8 & 10 hooks.

Andrew Anthony of Ledges Inn in Doaktown and Mountain Channel in the Rapids area said they had picked up maybe a half dozen fish this past week until the weekend. Then there were none until Wednesday morning when one was hooked at Mountain Channel. On Tuesday evening Mountain Channel saw about 10 fish moving through. The Doaktown area around Ledges has been quiet. Fish were starting to move to the cold-water pools again. Cooler nights were getting the fish through the low and warm water later in the days.

Flies of choice were smaller Black and Brown Bombers, small dark flies such as Conrads on nos. 8 & 10 hooks.

Herb Barry Sr. of Herb’s Fly Shop on the Station Road in Blackville said there were very few fish being caught, and very few anglers out. The water was low and warm, particularly mid to late day. He was praying for a good rain.

Curtis Miramichi River Outfitting in Blackville said anglers were seeing some fish, but few were taking due to low and warm water conditions. A salmon was caught Monday and an odd fish here and there over the week, but certainly not many.

Jim Laws of Miramichi Hunting and Fishing in Newcastle, Miramichi reported the fishing as very slow with the water warm by mid-day. Night temperatures were being a buffer, keeping mornings in the mid 60s Fahrenheit. Generally, there were very few anglers out.

Flies of choice were White-tailed Green Machines, Black Bugs and some Ally’s Shrimps. 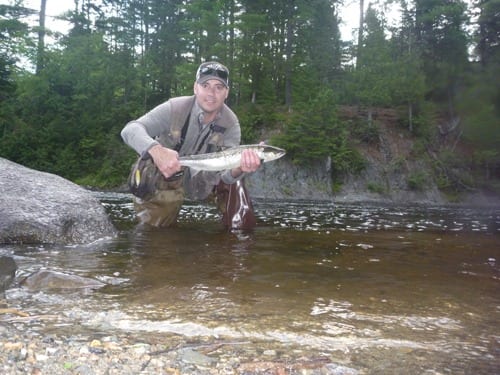 Caught Aug 8th by Jeff Morris on the Northwest Miramichi.

Syd Matchett of Trout Brook Fly Shop on the Northwest Miramichi said angling was very quiet and the water was as low as it had been two weeks ago. A thunder storm spiced things up a bit for half a day or so, but there were very few anglers out. He had not seen crews from Crown Reserve waters, and there were openings available. Decent night temps were making the situation tolerable.

Syd was pondering how to improve his “fish wheels” by adding 4-wheel-drives and winches to them so the fish could have a chance to get from pool to pool in such low water.

Debbie Norton of Upper Oxbow Outdoor Adventures on the Little Southwest Miramichi said they were having a great time fishing, but not catching many. They were waiting for tides to bring in more water and fish. She was anticipating a good fall run and looking for a good rain.

Flies of choice were White-tailed Green Machines with Krystal Flash and Black Marabou Hair without a body on no. 10 hooks.

So as we move through August we are in desperate need of rain. If we can get a good dumping, fishing should improve greatly and we can get out and “on the water”.

Thought for the Week: “In the best stories about fly fishing…big fish are caught or lost; people say wild and spontaneous words; event becomes memory and sometimes, in the hands of a master, weeds into art.” – Nick Lyons