This message is to inform you that as of Thursday August 3, 26 additional cold water pools will be closed to fishing on the Miramichi River system. A variation order was just issued today to this effect, and a notice to anglers will be published tomorrow morning on the regional DFO Internet at http://www.inter.dfo-mpo.gc.ca/Gulf/FAM/Recreational-Fisheries (under the ‘salmon’ headline).

Please note that one additional pool was included to the list of 26 pools closed under such circumstances, following the completion of cold water habitat improvement at these two locations: 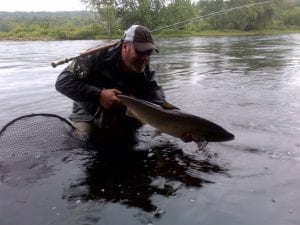 From our archives: David Bishop from Cascapedia Quebec with one of 3 salmon he hooked

Generally the water is getting quite low and warm, especially as it rises during the day. There are some fish around, but with the warm and low conditions, they are not taking well. Flies are either bombers or small darker flies on nos. 8 & 10 hooks.

If anyone knows a good rain-dance, please do it!

W. W. Doak and Sons in Doaktown said fishing improved last week with cooler temperatures, particularly during the night. Cooler mornings were producing the best with temps averaging mid 60S Fahrenheit, but afternoons were up to mid 70s. The further up-river you go, generally the better the fishing.

Flies of choice were dry flies, bombers and bus and small dark wets in nos. 8 & 10.

Andrew Anthony of Ledges Inn in Doaktown and Mountain Channel in the Rapids area said last week with cooler temperatures, Mountain Channel had probably its best fishing this year, but the water levels in Doaktown were getting desperately low, with a good day’s rain badly needed. They did catch two grilse at Ledges Wednesday morning. The only saving grace this week is the cooler nights.

Flies of choice were Blue Bombers on no.8 hooks, and Christmas Trees and Black Bugs with white tails on no. 10 hooks in wet flies.

Herb Barry Sr. of Herb’s Fly Shop on the Station Road in Blackville said angling was very quiet with very few anglers out. They were seeing fish, but they were not taking well in the low and warm water. He did not see much changing until we get a good soaking rain.

Flies of choice were bombers and dry flies, if you didn’t catch the fish when they were walking up river.

Curtis Miramichi River Outfitting in Blackville said there were some fresh fish late last week, but this week is spotty catching, although they were seeing some. With low and warm water fish were not taking.

Jim Laws of Miramichi Hunting and Fishing in Newcastle, Miramichi reported quiet angling with few anglers out and only an odd fish being hooked here and there. The water was low and warm and in need of a good drenching.

Flies of choice were dry flies and bombers along with small dark wets in nos. 8 & 10.

Syd Matchett of Trout Brook Fly Shop on the Northwest Miramichi said there was an odd fish being hooked. One angler from England hooked one on Monday and one Tuesday. But there were few other reports. The only saving grace is the cooler night temperatures as the water is desperate low and warms quickly when the sun hits the water and rocks.

If you are considering fishing the Northwest, it is best to check with Syd to find out which day to come as the river is so low it is only running every second day. Syd has also taken a break from his fly-tying as he is working on designing small wheels to be put on salmon bellies so they can roll up over the rocks on their way to the headwaters.

Flies of choice were Green-butt Bear Hairs and Brown Bombers.

Debbie Norton of Upper Oxbow Outdoor Adventures on the Little Southwest Miramichi said they were catching a few fish here and there. Paul Sonier of California caught a 14-pound salmon and there were a few others with a grilse. Most of the fish were on the dark side from having been in the system for a while. Cooler nights were helping the morning temperatures, but a good day of rain is needed. Over all, considering how hot it is, one would have to say that fishing is OK.

Norton said the MSA and other groups are doing electro-seining and still working on eradicating small mouth bass from Miramichi Lake.

So pray for rain and cooler temperatures so we can get back “on the water”.

Thought for the Week: “One thing becomes clearer as one gets older and one’s fishing experiences increases, and that is the paramount importance of fishing companions.” – John Ashley Cooper

Cumulative counts to date of salmon as of July 31
* indicates fewer than 5 years are available to calculate the mean.
N/A indicates that no values exist for that year, date of operation may vary from year to year.

Cumulative counts to date of grilse as of July 31

Court Orders Assessment of Massive NL Salmon Aquaculture Project
~~~~~~~~~~~~~~~~~~~~~~~~~~~~~~~~~~~~~~~~~~~~~~~~
The Atlantic Salmon Federation has successfully challenged a decision by the Government of Newfoundland and Labrador that allowed the proposed Placentia Bay aquaculture project to go ahead without any environmental assessment. Links below include ASF’s press release, where you can download the judge’s decision, and some of the subsequent news coverage.
http://asf.ca/court-orders-assessment-of-massive-nl-aquaculture-project.html

Justice Gillian Butler handed down her decision and it immediately received media coverage from coast to coast.
http://asf.ca/judge-orders-further-environmental-assessment-of-proposed-p.html

A strong editorial explaining why a FULL environmental assessment was needed appeared in The St. John’s Telegram.
http://asf.ca/sound-judgment-says-telegram-editorial.html

The NL Gov’t position at this moment.
http://asf.ca/government-will-review-supreme-court-order-on-250m-placenti.html

The program will soon afterward be available as a podcast.
http://www.bbc.co.uk/programmes/b08yrs07