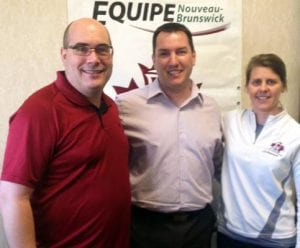 “We are pleased to have Jason Dickson selected as Team New Brunswick’s honorary captain for the 2013 Canada Summer Games,” said Healthy and Inclusive Communities Minister, Dorothy Shephard. “Dickson’s achievements on and off the field are well-known by New Brunswickers. His participation as honorary captain will help encourage our New Brunswick athletes to perform to their capabilities at the Games.”

“I am pleased to be named the honorary captain for Team New Brunswick at the 2013 Canada Summer Games,” Dickson said. “I remember my Canada Games experience as being a stepping stone to national and international competition, and it was great preparation for my career in major league baseball and the Olympics.”

As a former Canada Games athlete, Olympian and major league baseball player, Dickson will serve as a role model for Team New Brunswick members at the Canada Summer Games.

The 2013 Canada Summer Games, to be held August 2-17 in Sherbrooke, QC, will bring together 4,200 athletes to compete in 20 disciplines on 20 different sites. Team New Brunswick will consist of 415 athletes, coaches, managers and mission staff.