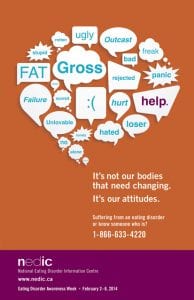 It’s Eating Disorder Awareness Week from February 2 – 8, 2014 and we challenged our young columnist, Jules Keenan to write something on the theme. She decided to write a short piece of fiction from the point of view of a high school boy.

Everyone has their insecurities, especially about their appearance.

I would know, not only because I walk the halls of high school hearing the whispered word “fat” over and over, but because I am an observer. I notice things other people can’t even see, don’t even give a second glance.

I see a lot of things. Some things that deserve to be noticed, while others should have stayed in the dark. So why wouldn’t I notice this too?

She was fine. No, she was more than fine. I thought she was beautiful. Way prettier than the fake girls that roam the school with no respect for themselves. Weighing around 130 pounds, she was the most precious thing I had ever seen.

But then one day, the whispers got a little bit louder. The comments got a little bit crueler. And she just couldn’t stand being called fat, ugly, and a loser anymore. So she decided to become skinnier. Not by working out, but by going on a “diet”. This “diet” consisted of absolutely nothing but water.

She would throw her lunch out when she was in the cafeteria, and wouldn’t eat her snack. One time by walking by the girls washroom, I heard her vomiting her guts out. I pretended to get a drink at the fountain just to watch her come out.

Her pounds slowly started slipping off. From 130, to 120, to 110, to 100 … You would think being that skinny, she would start eating again, but she didn’t. Even the smell of food was too overwhelming for her to bear.

Her face was hollow, and her ankles and wrists too bony. The beautiful body I had loved months ago, was now destroyed. All because she thought she needed to change for people who didn’t even care about her.

In her mind she will always be fat, and I don’t think she even realizes she has an eating disorder. But the sad thing is, she was perfect just the way she was. 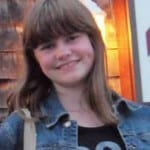 Fourteen year old Jules Keenan has been writing since she was six. One of the youngest members of the Writers’ Federation of New Brunswick, Jules enters their writing contest every year and hopes one day she will win an award. The eighth grade student of Blackville Middle School lives in Barnettville, NB with her twin brother, Samuel; younger sister, Abby; proud parents, Jennifer and Jason; and fur baby, Max.