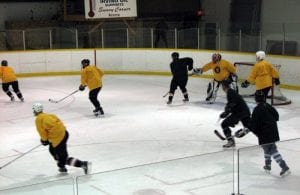 The annual tournament honours Ed and his many years of playing hockey around the Miramichi. All proceeds go towards a scholarship in Ed’s name at NSER.

Great crowds attended to show their support for this event and everyone involved enjoyed a wonderful weekend filled with fun and laughter as they shared old stories about Ed and formed new friendships. The Sheasgreen family attended the official Opening Ceremonies and puck drop on Friday evening and Ed’s daughter Paula spoke on the family’s behalf.

In the end, Team Sobey defeated Team Harris in the final to be declared this year’s overall winners. Todd Sobey received the MVP award for the tournament with one goal and 22 assists.

Many thanks to Doug White, Shawn Hubbard, Jeff Silliker, Sam Maltby, and Jason Harris for all their hard work in making this event a success. Plans are already in the works for next year’s event.