Around the River this Weekend September 10th – 13th 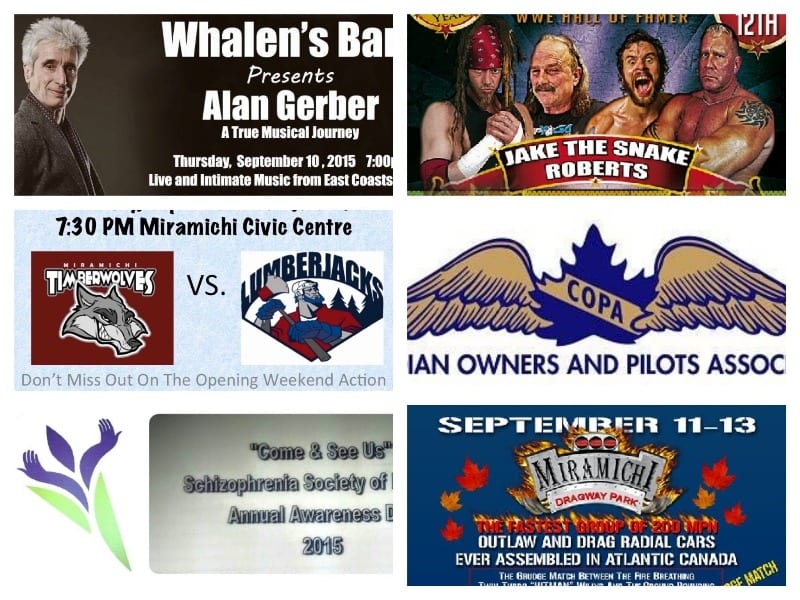 Much cooler temperatures and periods of rain in the forecast for this weekend but still a lot of people planning Yard Sales. Click here to plan your route! If you are having a Yard Sale or a Craft or Bake Sale, you can add it to the list FREE of charge!

Fingers crossed the rain holds off and the Fall Brawl at the Miramichi Dragway Park goes off without a hitch as there are some interesting Grudge matches on tap with big money at stake! Of course while that may be one of the most anticipated events scheduled for this weekend there’s a lot more going on.

Tomorrow everyone is invited to an Open House at the Miramichi Schizophrenia Society offices in Chatham. On Saturday at the Miramichi Airport, kids fly for free with members of the Canadian Owners and Pilots Association! And Saturday night our Miramichi Timberwolves get the regular season started with their home opener against the South Shore Lumberjacks at the Civic Centre in Newcastle.

Another one of the most anticipated events of this weekend is the big 10th Anniversary of the IHW happening at the Miramichi Curling Club in Newcastle on Saturday which has very special guest WWE Hall of Famer, Jake “The Snake” Roberts. He’ll be on hand from 3-4 pm earlier that afternoon for an autograph signing at Jungle Jim’s.

For more details about any of these events or to view the complete list what’s happening around the river visit the Events Calendar. If you have an event coming up, you can list it for free at Mighty Miramichi.