The 2016 spring salmon season kicked off with a bang last Friday and fishing has continued to be good.  Many anglers are limiting out and seeing and hitting lots of fish.

W. W. Doak and Sons in Doaktown said angling has been very good with good numbers of fish around and ready to take.  “This confirms what we had expected for this spring after a good return last year”, said Doak.  Over all it is certainly better than last year’s start which has late ice and poor weather.  There is a good mix of salmon and grilse, and water conditions were good.

Derek Munn of Ledges Inn in Doaktown and Mountain Channel in the Rapids area said fishing has been very good with most anglers catching their limit, or close to it.  He felt there was a 60-40 % mix in favour of salmon.  Water conditions were great.  One angler hooked into a 44-incher. 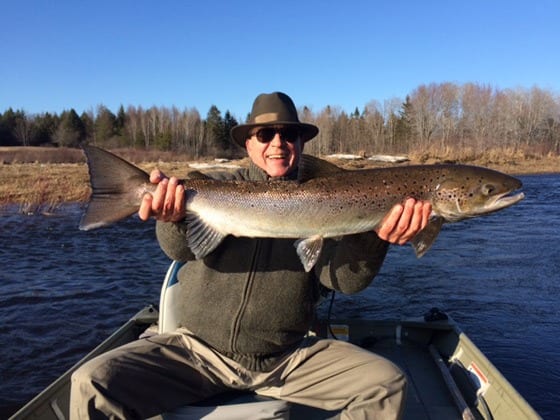 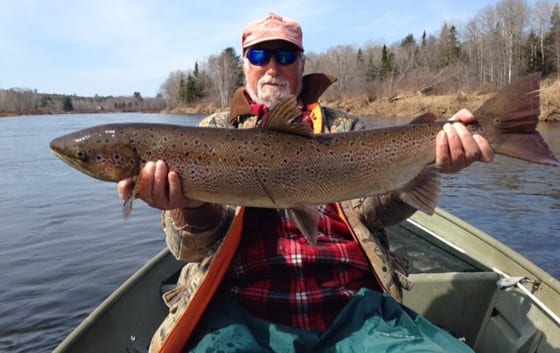 Herb Barry Sr. of Herb’s Fly Shop on the Station Road in Blackville said the season had a great start with good results.  Anglers were picking up some big ones in the 39-40 inch range.  One angler caught an old ugly hook-bill whose head was nearly as long as its body.  The water had dropped nicely to a good spring level and was clear.  Generally, there seemed to be more salmon than grilse.

Curtis Miramichi River Outfitting in Blackville said anglers were having a great start to the season and fishing was good, as was the weather.  Although the weekend had been terrific, fishing slowed a bit mid week, but was still good.  There were a decent mix of salmon and grilse being caught, with one 40-incher reported.

George Routledge of George’s Fly Shop at the Mouth of Renous in Quarryville was unavailable for a report as he is in the hospital with pneumonia.  We all wish him well!

Jim Laws of Miramichi Hunting and Fishing in Newcastle, Miramichi reported some Black Salmon being hooked all along the system.  Anglers were also picking up some striped Bass as incidental catches.  Water conditions were good.

Syd Matchett of Trout Brook Fly Shop on the Northwest Miramichi said fishing was quite good, especially in the Doaktown area where several anglers limited out several days in a row.  The Northwest was clear of ice and had raised a bit on Monday.  One boat reported landing five that day.  Most sports had not yet arrived, so he was expecting an even better report for next week.  Shore anglers were also picking up some fish.

Debbie Norton of Upper Oxbow Outdoor Adventures on the Little Southwest Miramichi said fishing was good and all her guests were limiting out with 10 a day.  Water was a nice height and clear.  Norton said her son Bobby launched his boat and had a 20-pound salmon on his second cast.  He released it and immediately caught a grilse, so that was not a bad start to the season.  Larry Powers and Bryon Wierwill of Wisconsin had a great start to the season as did Blair Williamson of Ontario and Roland L’Abie of Fredericton.  There was a good mix of salmon and grilse being caught.

So with good conditions and good fishing it is time to get out and “on the water”.

Here is a picture of my five year old son Ben fighting a spring salmon.  We didn’t manage to land it, but thought it was a nice picture all the same. 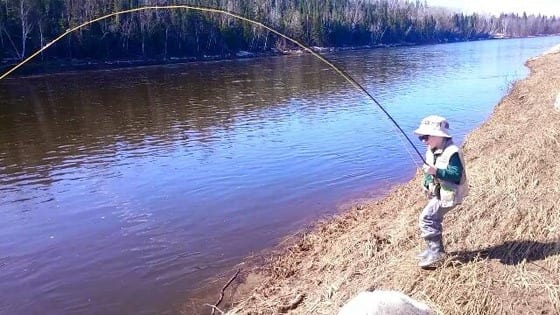 The Golden Eagle hatch was in perfect line with opening day this year!

We hooked a pile of fish opening weekend 90% grilse…..go figure if you release grilse and don’t kill them, they are still around in April.

Here’s a video of a few fish that couldn’t resist the Golden Eagle!

Bass Fishing on the Miramichi

Thought for the Week: “In Ireland, the rivers find their source in the Otherworld; specifically in an Otherworld well or spring which, bubbling up from the earth, is surrounded by trees of wisdom. Five streams, said to be the five senses, flow from the spring. Salmon swim in that spring and eat the hazelnuts which fall, occasionally, into the water.  To eat a salmon from this water is to receive poetic inspiration and to drink from the water itself, in ecological interpretation, is to enter into a way of being that is consonant with the underlying patterns of the cosmos.” ― Jason Kirkey, The Salmon in the Spring: The Ecology of Celtic Spirituality