The second week of spring salmon continues to provide good fishing.  Keep in mind the best fishing is a few days after ice-out, but there is still good fishing to be had.

Sunday May 1 is the official opening for two more sport fisheries.  The first is for trout which opens on all streams, rivers and brooks, and remains open until September 15.  However, trout fishing in lakes, reservoirs and ponds does not open until May 15 and closes September 16 as well.  The daily bag limit for trout is a total of five, of which only two can be over 30 centimeters.  The minimum size for brookies is 10 centimeters.  Arctic char, Brown trout and Rainbow trout have a minimum size of 15 centimeters.

The second season which opens Sunday is for Striped Bass and closes October 30.  However, this period of time is for hook and release only with the following exceptions. Anglers may retain one Striped Bass a day between 50 to 65 centimeters in length during the following periods:  May 9-29, July 30-August 21, September 2-5 and October 22-30.  Note: The possession limit is one, so you cannot catch a fish three days in a row, eat one and freeze two.

W. W. Doak and Sons in Doaktown said angling was still very good, and the salmon have not appeared to be dropping down as there was still good fishing in the Boiestown area and above.  In terms of anglers this season looks to be better than last with more non-resident fishermen.  They were catching a good mix of salmon and grilse with a nod to more salmon.  The water has dropped from spring high to a very comfortable level with anglers not using as heavy a sinking line as earlier.

Derek Munn of Ledges Inn in Doaktown and Mountain Channel in the Rapids area said fishing was still good with anglers catching lots.  There was a good mix of salmon and grilse.  They had picked up one salmon in the 44-inch range.  The water was dropping, but still a good level.

Flies of choice were Marabous with orange & black, black, and blue along with some Black Ghosts.

Herb Barry Sr. of Herb’s Fly Shop on the Station Road in Blackville said angling was not super as it usually is for the first week, but still very good with lots of fish around.  Anglers were catching a good mix of salmon and grilse and the water was clear.  The only negative was there were not a lot of anglers out.

Curtis Miramichi River Outfitting in Blackville said angling was not too bad with some still limiting out with 10 a day.  Others were doing well.  The catch was a good mix of salmon and grilse.  The water was dropping to a good height.

Jim Laws of Miramichi Hunting and Fishing in Newcastle, Miramichi reported decent numbers of spring salmon being hooked with a mix of salmon and grilse.  Water conditions were good.  There were a good number of anglers reporting Striped Bass in good numbers as an incidental catch.

Syd Matchett of Trout Brook Fly Shop on the Northwest Miramichi said fishing was good and the water was a good height and clear.  A good number of trout were being hooked and released.  There were a god number of salmon in the 33-36 inch range.

Debbie Norton of Upper Oxbow Outdoor Adventures on the Little Southwest Miramichi said fishing was really good. You know this when guests are complaining about too many grilse and being tired from hooking 35-inch salmon.  The water had dropped from spring high to a good level and was clear.  She noted the American Salmon Syndicate (ASS for short) were back for their annual visit with their own salmon flag.  She said this group had introduced the Winnipesaukee Smelt to the Miramichi, but had changed its name to “Pink Panties”.

The Miramichi Salmon Association were out yesterday and today tagging 25 kelts with electronic transmitters to track them through the Strait of Belle Isle and on to Greenland as part of on-going research to see what happens to salmon at sea.

She also noted that the MSA and Miramichi Watershed Committee will be hosting a “Science Day” regarding |Atlantic Salmon at the Woodsmen’s Museum in Boiestown on Friday April 29.  Admission is free and lunch will be provided, but please RSVP so they know how many lunches to prepare.  Contact Nola at 506-622-1781 for your reservation.

Flies of choice were Golden Eagles, Winnipesaukee Smelts and Marabous.

So with three species (Salmon, Striped Bass and Trout) open for angling it is time to get out and “on the water”.

Our thoughts and prayers go out to the family and friends of Bob Walsh who passed away this past week.  Bob was an avid angler and served as treasurer of the Square Forks Fishing Club.
———————————————- 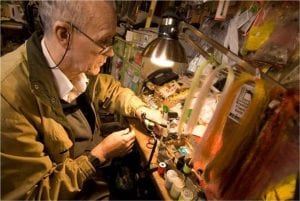 As well, the Miramichi River lost an icon on Wednesday with the passing of George Routledge.  George was known by so many anglers here and abroad.  “George’s Fly Shop” was a gathering place for not only fishing gear of all kinds, but for the stories, cups of tea, and friendship that was shared by all who entered.  He will be missed by all who knew him.  I am proud to have known George and to have been considered one of his friends.  He was always ready to lend his support to any community or fishing event.  He was a member of the Atlantic Salmon Museum’s Hall of Fame in Doaktown, NB.

I can imagine George approaching the Pearly Gates and meeting St. Peter.  The conversation might go like this:

“Welcome George.  We have saved a special place for you!  Have a cup of tea.  We have the radio on CBC for you.  By the way, How’s the Fishing on the Miramichi?  What flies would you recommend?”

George: Watch over us.  We miss you!

ASF’s Bill Taylor and Jonathan Carr discussed the runs on CTV. Check it out:
http://asf.ca/angling-season-and-salmon-concerns.html

An editorial in New Brunswick’s provincial newspaper, the Telegraph-Journal drew attention to the need for a renewed focus on the restoration of runs of Atlantic salmon:
http://asf.ca/government-must-take-action.html

Connecticut Trout Stamp Bill SB-139
Greetings, Members and friends from Connecticut, we need your support for SB-139, the Trout Stamp Bill. This is a good faith effort by the fishing community at this time of “Budget Distress” to create a new revenue stream to support the Fisheries Div. and the hatcheries. It will establish the authority for the Commissioner to…
Read on »

Members Fly Fishing Outing
CRSA Members – join us at Limestone Trout Club for a day of fishing on May 11th. Contact Bob Hoffman () to reserve your spot. Members 2016 Fly Fishing Outing invitation to CRSA members for fishing at LTC
Read on »

Fishing Report #1
Here’s an interesting Fishing Report from the CT DEEP. There are links to maps and other fishing resources, including their facebook page: www.facebook.com/CTFishandWildlife FishRpt01 04-14-2016rev
Read on »

It’s salmon stocking season!
From now until mid-May, you’ll find our schools releasing fry in the Salmon River, Farmington River and Salmon Brook. All Salmon-in-Schools teachers – help us collect data! Please fill out the form below (one per tank) when your salmon season is done.  Thanks! Atlantic Salmon Data Sheet 2016
Read on »

Fish report extra
…attached is a recently published journal article about bycatch of river herring out in the ocean.  People often ask why river herring runs in southern New England are so depressed while runs in Maine seem to be doing okay.  This paper explores one aspect of that. (Steve Gephard) River Herring Bycatch Article The next weekly…
Read on » 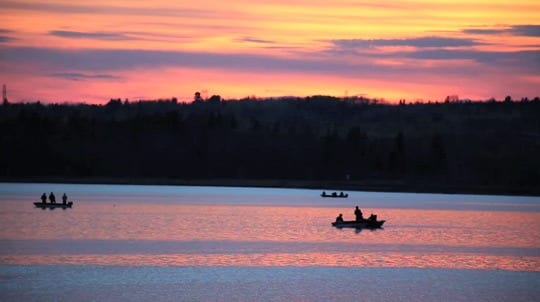 Atlantic Canada’s premiere striped bass fishing tournament attracted over 1,000 fishing enthusiasts in 2015, its first year. This “catch and release” tournament features three divisions: Team/Boat – up to 4 people ($150 registration fee); Individual/Shore ($20 registration fee) and Youth (free). A top prize of $5,000 goes to the team that with the heaviest 4 fish (allowed to weigh in 2 fish/day). The longest fish registered over the 2 days of competition takes the Individual/Shore division. Peter Bowman of the popular Fish’n Canada television show said “We have never experienced anything like this in our lives before,” while in Miramichi last May filming for their season premier.

Our Individual/shore division is expected to be our biggest draw with participants competing for some great prizes in a “greatest length” style two day competition. All participants will be required to photo document their catch and submissions will be posted on our website and social media sites.

Leaderboard style updates will be provided via social media and our websites to keep followers interested and enthusiasts visiting our sites to get the latest updates. Our Youth Division (16 years and under) will provide the future of the recreation fishing industry with an opportunity to experience the spirit of competition but will also form our target market in years to come by providing a premium event and experience at no cost to the youth participant. 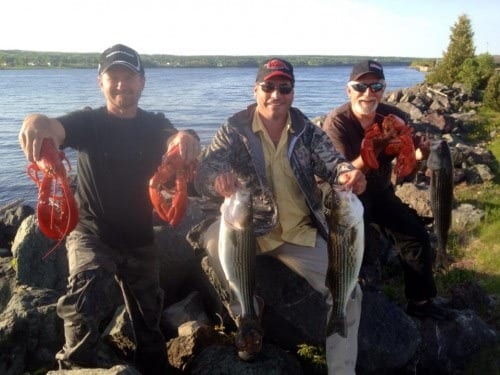 Pete Bowman is one of the hosts of the television show “Fish’n Canada” that has been on the air for thirty years, with nationwide coverage on the Global Network. “We are Ontario based, but we do our share of travelling, and cover amazing fishing spots like Miramichi,” Bowman told mo on Sunday night at the end of the closing ceremonies of the inaugural Miramichi Striper Cup.

Fish’n Canada was in town all last week fishing and filming for an upcoming episode about the striped bass fishery in Miramichi.

“We won’t just promote the bass tournament, but the striper fishing in the area in general,” explained Bowman, when asked about the theme of the upcoming episode. “We have done shows on striper fishing before, we been making shows for 30 years, but we have never experienced anything like this in our lives before.”

So what makes the Miramichi experience so different? “Sheer numbers, and visually watching the fish in the river. You see ten thousand fish a day here in the river, and it just blows your mind,” Bowman said. Bowman says that their show reached 200,000 people at any given minute. “That many people will this episode, and it will make a lot of impressions.”

“I have to bring my kids out here fishing someday. It’s crazy, it’s that good.”

The episode will depict the east coast flavour, and of course lots of fishing and striper cup. “This will also be the first episode where we used our drone camera, and that will really spice it up,” said Bowman. The drone could be seen over the river at Ritchie Wharf when the horn went off on Saturday morning, filming the exciting race of the boats up river.

More about the program can be seen here: http://fishncanada.com/fishn-canada-ondemand/