We are still awaiting the arrival of the Fall runs to our rivers.  This weekend sees the full moon, and hence full-moon tides that are higher than normal, which hopefully will bring in fresh fish as part of the Fall runs. 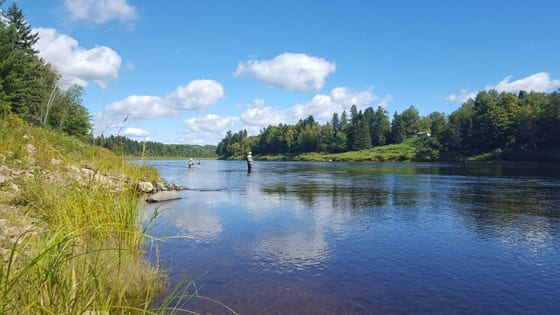 W. W. Doak and Sons in Doaktown said angling was slower than last week as warmer days had limited the catching, but some were still being caught.  There were still fish throughout the system.  Water temps were good, but the level was a tad low in places such as the Cains and further p river.  Rain on Wednesday certainly helped a bit, although more would be welcomed

Flies of choice were Same-Thing-Murrays, White-tailed Green Machines, Ally’s Shrimps, Tippet Shrimps, General Practitioners and Bombers.  Most of the wets were no. 8s.

Derek Munn of Ledges Inn in Doaktown and Mountain Channel in the Rapids area said angling was not great, but they were catching a few every day, some days better than others.  Water conditions were good as far as temperatures were concerned, but in some places the height was a tad low.  A good rain would be welcomed.

Flies of choice were mostly Bombers (Blue & White, Brown & White, Green & White) along with some Shady Ladies, White-tailed Green Machines and Undertakers on no. 10 hooks.

Herb Barry Sr. of Herb’s Fly Shop on the Station Road in Blackville said angling was slow.  There were some fish around, but they were not taking well.  The water was low, but a perfect temperature.  The few that were being hooked were mostly salmon.

Curtis Miramichi River Outfitting in Blackville said there were good numbers of fish around, but anglers were only catching a few.  There were no amount of fresh fish, but those there were a good mix of salmon and grilse.  Water temperatures were good, but a good rain is needed.

Flies of choice were Undertakers, Preachers and Bombers on nos. 6 & 8s.

Jim Laws of Miramichi Hunting and Fishing in Newcastle, Miramichi reported slow angling.  There were some fish around, but not taking much.  The water was down, but a decent temperature.

There were a few striped bass starting back in the Nelson area, but it is still a bit early for the good fishing.

Flies of choice were White-tailed Green Machines, Shady Ladies and Undertakers, along with the traditional Fall patterns.

Syd Matchett of Trout Brook Fly Shop on the Northwest Miramichi said fishing was quiet since the weekend with the return of very warm temperatures.  There were not a lot of anglers out and conditions had been windy.  There were still some fish around, but not many fresh fish.  The water was low but a decent temperature.

Debbie Norton of Upper Oxbow Outdoor Adventures on the Little Southwest Miramichi said They had caught three (a salmon and two grilse) fish last Friday, but did not have any sports out since then.

There were some fish around, but they were not taking well.  Water conditions were very good.  With the full moon on Friday, Debbie was predicting we will see the Fall run begin.

So hopefully, the full-moon tides will bring in fresh fish so we can get out and “on the water”.

Deals 4 U and Moncton Fish and Game Association

Thought for the Week: “There ain’t but one time to go fishing, and that’s whenever you can.” Diron Talbet

I Just read your weekly report, where you mention  (about the recent striped bass announcement) ‘’However, no mention was made regarding the possession limit, an item that must be clarified’’.

Or the notice to recreational anglers issued back in April, but also updated on September 2 following the announcement.
http://www.inter.dfo-mpo.gc.ca/Gulf/FAM/Recreational-Fisheries/2015-16-Striped-Bass

As a reminder, this is the main page for DFO Gulf Region recreational fisheries, where these links can be found:
http://www.inter.dfo-mpo.gc.ca/Gulf/FAM/Recreational-Fisheries