Do you know a Miramicher who knows how to Giv’er? We are now accepting nominations for a new regular feature profiling people from the region who Giv’er in everything they do! From volunteer work to being successful business owners, the very best employees, parents, role models and more. If you know someone who constantly goes above and beyond to contribute to the community, we want you to tell us about them! Email your nomination to with a brief description telling us why you think this person deserves to be profiled. Look for more Miramichiers Who Giv’er in future! 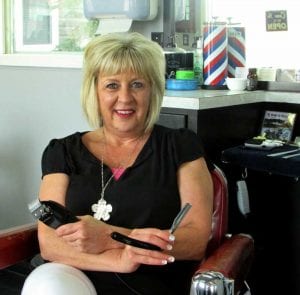 Shawn Boisvert is no stranger to the river and anyone who has ever met her knows she is a Miramichier who knows how to Giv’er! What many might not realize is that Shawn recently made the very courageous choice of following her long lost teenage dream.

“I giv’er one hundred percent in what I set to do daily in my life – whether it is my clients, my job, giving back to the community I love—the Miramichi. I try to commit and contribute to it!” Shawn says.

Shawn knew she wanted a change of career after spending three decades in the food and beverage industry. After much soul searching, she weighed the pros and cons and made the decision to follow her dream. At age 50, Shawn decided to enrol in a program at Eastern College in Saint John to become a barber. Part of this program included a training practicum for three weeks, which she did with Derrick Underhill at Underhill’s Barber Shop in Newcastle. Derrick was looking for a barber full time, and just two days into her practicum, offered Shawn a position. During this time, she became a Red Seal Self Employed Barber and two days before her 51st birthday, she graduated with distinction.

“No matter what age, believe in yourself and pursue your dreams. It takes strength and courage. However, you will be fully fulfilled when you reach your goal,” Shawn says.

Now after a year into her new career, of which she loves every minute, Shawn has built a full clientele, and cannot thank them enough for the support they have shown towards her. As well, she thanks Master Barber David Lyttle Instructor from the barber program at the Eastern College, who encouraged and believed in her. The support of fellow classmates and staff was also a great source of inspiration, especially Ami Cail, Director of Eastern College. Most notably, she thanks Derrick Underhill for believing in her and asking her to stay and join his business. And finally Shawn expresses much appreciation to the respected, retired fellow barbers from around the river who drop by Underhill’s Barber Shop to praise her accomplishments and the support of the NB Registered Barber Association. 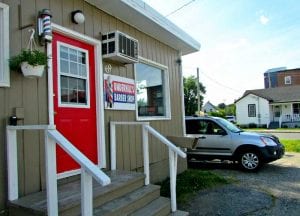 Shawn has had a couple of memorable occurrences during her new career. Last November, she and Derrick invited Matthew White, the founder of the Sussex Beard Oil Merchants, and gave him an opportunity to showcase his popular products. She is proud to be the Miramichi representative of these products. They include beard oil, shaving soap, beard and beyond soap, stachestick and much more. Recently in March, she met Curtis Rempel, a member from one of Canada’s top Country Music bands, High Valley. Following their Miramichi show, she presented him with the popular Sussex Beard Oil product.

Shawn’s specialities include all the latest trends and the popular “Fade” along with Beard Grooming. Her prices range from $12 to $18, including add-ons such as beard and moustache trims and hardlines. Gift certificates are available. Her hours of operation are Tuesday to Friday from 8 am to 5 pm and Saturday from 8 am to 12 noon. Walk-ins are welcome as well as appointments. “Drop by!”

In her spare time Shawn loves being around friends and family, getting together with fellow barbers, travelling and enjoying concerts, and she enjoys and looks forward to every festival and event in the Miramichi!

“Always remember to giv’er so you do not have any regrets!” Shawn says. 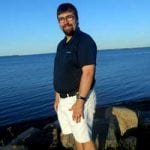