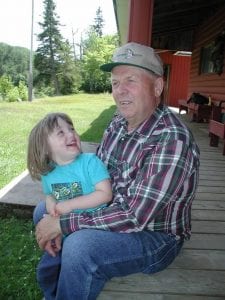 When first arriving at Mervin Green’s home I was fully expecting to hear some great fishing tales about guiding on the Miramichi River. What I walked away with was 3 hours of stories about adventures across Canada and reasons why women are the best fisherman to guide.

Although born in Saskatchewan in 1934 Mervin’s family moved back to the River when he was just two years old. Mervin quickly decided to forge his own path when he quit school to work on a farm in Ontario at the age of 15 and tried his hand at being a cowboy out-west at 16, only to find himself hitchhiking all the way back to his families homestead in Hayesville, NB.

As early as 1951, Mervin has been guiding the River for Salmon Brook Camp. This proved fruitful on both professionally and personally for him as he actually ended up marrying the camp managers daughter, Myrna Calhoun, in 1968 and then becoming Camp Manager himself in 1981.

This was back in the days when you fished with bamboo rods, most fisherman coming to the camps “thought more of fishing gear than their wives” and you only fished with traditional Hardy’s fully dressed flies. A lot has changed for guides since the days when Mervin first started guiding and fishing seemed to take a lot more planning and effort, when you had to do things like soak your leader overnight, prepare a full breakfast after poling up the river 4- 5 miles.

When asked about the most interesting person he had guided Mervin responded easily with Governor General Roland Mitchener, who knew “just how to treat people to get exactly what he wanted”.  He had showed up to the camp in mid June of 1971 with full bouquets of flowers and flattery for all the cooking staff and since he was there on Mervin’s Birthday even delivered him his cake, sang and offered him a gift. Some other notable and memorable people include Gordie Howe and a few past Olympians, but when asked who Mervin likes to guide most he didn’t answer with the famous or the wealthy but rather women because we pay way more attention to our guides and therefore always have better luck fishing.

One of the most memorable and unexpected stories Mervin told me was about his being co-captain of the New Brunswick Team in a canoe race across Canada to celebrate the Centennial in 1967. Although the canoe race itself proved very interesting, there is already a book written about that, the most interesting part for me is how he came to be on the team. After not hearing back from the initial try out Mervin travelled back to the Fredericton YMCA to ask the coach in person how he did. The coach then began listing all the reasons he had not been chosen including the fact that he only weighed about 175 lbs. Mervin was quick to point out how heavy and slow a boat would be with a bunch of 250lbs lumberjacks and the coach gave his whole plan a rethink. Mervin was invited to the call backs that included a full day of sprinting and paddling non-stop. At the end of day that had started with 65 men only 29 had lasted including Mervin and when the group was polled about who they would like on their team Mervin’s name showed up and every single other persons list.

Mervin Green is a father of 3 sons, Jeff, Derrick, and David, Grandfather of 8, and has been a Life Member of the Miramichi Salmon Association since 1985.