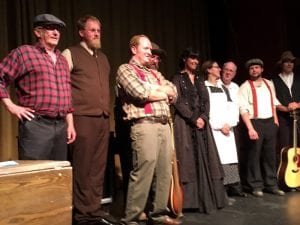 This Saturday, August 12th, at Miramichi Folklore Park,46 Memory Lane in Renous, will be the first in a series of concerts titled “Around The World In 80 Songs”. These shows will feature the art, dance and music, as well as food sampling of dishes traditional to some of the more than 60 countries/ cultures from around the world that are represented on the Miramichi. This concert will see the Fochabers Fiddlers from Scotland perform on our stage. These young people are a world-class act who have performed at the Royal Albert Hall in London and have played before Prince Charles.

Following them will be the Heritage Players who have been together for over 10 years. They will be performing some of their best music from their plays, interspersed with special guests. There will be some very nice food present and people will be asked to help themselves.

The music starts at 8 pm. Tickets are $10 and are available at Brookdale Flower Shop, Renous Convenience or by calling 625-3544. There may be tickets at the door.