PLEASE NOTE: The article below is from August 2017.  Please visit http://www.inter.dfo-mpo.gc.ca/Gulf/FAM/Recreational-Fisheries for information on the current year.

MIRAMICHI – On a positive note, DFO has reopened the cold-water pools that were closed last week. Please see below:

This message is to inform you that as of Thursday August 10, 26 cold water pools that closed on August 3 will be REOPENING to fishing on the Miramichi River system. A variation order was just issued today to this effect, and a notice to anglers will be published shortly on the regional DFO Internet at http://www.inter.dfo-mpo.gc.ca/Gulf/FAM/Recreational-Fisheries (under the ‘salmon’ headline).

Please note that the three following pools are still closed to fishing. 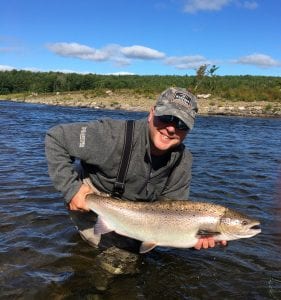 Guide Greg Amos of Ledges with a beauty hen he caught Monday
morning.

Conditions began to change for the better last weekend with cooler temperatures and some rain which brought the rivers up and started the fish moving. The full-moon tides also helped. However, the heat has returned, but cooler nights are tiding us over as the water levels are dropping quickly. A good soaking rain is still needed for the forests and rivers.

W. W. Doak and Sons in Doaktown said fishing was looking a little better this week than last. There had been 1 ½ inches of rain above Doaktown, which raised the Main Southwest about five inches. The water temperature was also cooler this week, with more unsettled weather in the forecast. There were some salmon and grilse caught in the Doaktown area as fish were leaving the cold-water pools, but over all, fishing was on the slow side. The change in conditions was not a fix, but it was a start.

Flies of choice were small dark flies such as White-tailed Green Machines, Shady Ladies, Same-Thing-Murrays, Undertakers and Glitter Bears on nos. 8 & 10 hooks along with White and orange Bombers.

Andrew Anthony of Ledges Inn in Doaktown and Mountain Channel in the Rapids area said there was a decent raise in water on Monday that got fishing moving. The temperatures were in the low 60s Fahrenheit in the mornings, but going up to the 70s by late afternoon. Some fish were caught at their pools in the Doaktown area, and two grilse at Mountain Channel Monday. The water was up about nine inches, but dropping quickly.

Flies of choice were Bombers, Stoneflies, Smurfs, and Glitter Bears on no. 6 hooks.

Herb Barry Sr. of Herb’s Fly Shop on the Station Road in Blackville said there was nothing to report as there was hardly anyone fishing except the odd sport. The water was low, but the temperature was better than last week.

Flies of choice were a variety of Bombers.

Curtis Miramichi River Outfitting in Blackville said reports were very few as there were hardly anyone fishing. One angler did catch two grilse and saw several more early this week. The water had raised some, but was dropping quickly. However, the temperature was good.

Flies of choice were small dark flies and Bombers.

Jim Laws of Miramichi Hunting and Fishing in Newcastle, Miramichi reported a slight improvement early this week with fish moving after a bit of rain and cooler temperatures. But by Wednesday the warmer days were back. The saving grace was cooler nights.

Flies of choice were Bombers, White-tailed Green Machines and a few Ally’s Shrimps.

Syd Matchett of Trout Brook Fly Shop on the Northwest Miramichi said angling was not bad on the weekend and early this week. One angler limited out, while Gordon Day landed a salmon and two grilse. The northwest had come up close to two feet, but was dropping in the upper stretches, although holding its height better in the lower section.

Flies of choice were White Bombers with orange hackle and white-tailed Green Machines on no. 6 hooks.

Debbie Norton of Upper Oxbow Outdoor Adventures on the Little Southwest Miramichi said water levels had come up about a foot on her river, but were dropping back quickly. There were 14 participants at her place as part of the annual “Soldier On” program (much like the Wounded Warrior Program in the USA) where those in attendance (males & females) were treated to fishing and fly-tying. About half were successful at landing fish.

Flies of choice were some strange looking patterns that the crew had tied themselves in a variety of sizes, shapes and colours.

Several others fishing the Little Southwest also had luck with a lady catching a salmon, a gentleman a grilse and another angler landing three and a good pull to boot.

So, with cool night temps (a few in the single digit territory) some unsettled weather and the re-opening of the cold-water pools, it is time to get out and “on the water”.

Thought for the Week: “More than half of the intense enjoyment of fly-fishing is derived from the beautiful surroundings, the satisfaction of being in the open air, the new lease of life secured thereby, and the many. many recollections of all one has seen, heard and done.” – Charles F. Orvis

ASF’S Don Ivany Explains Why there is an Urgent Need to Protect Salmon
http://www.cbc.ca/news/canada/newfoundland-labrador/asf-want-retention-salmon-fishing-stopped-1.4231601

Could NB’s Salmon Retention Ban be Headed for The Rock?
http://asf.ca/could-nb-salmon-retention-ban-be-coming-to-the-rock.html