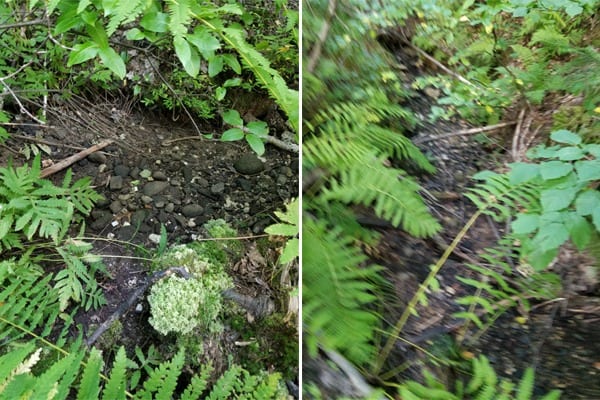 Two views of a brook, currently dry, that normally flows into the Northwest Miramichi, one image looking up the brook and the other of the brooks mouth.

MIRAMICHI – Water temperatures have improved this week, resulting in a few more fish being in the taking mode. However, we still have had no significant rain to improve the water levels. Having said that, I’m sure Houston would gladly share if they could. Our sympathies go out to them in this time of crisis.

W. W. Doak and Sons in Doaktown said the good news was lower water temperatures with cooler nights giving the river around 60 degrees Fahrenheit for the morning start. However, water levels remain very low with few reports of any amount of new fish coming into the system. One camp in the Doaktown area report three fish caught Tuesday, and camps further up-river have been doing reasonably well.

Flies of choice were Killer Whiskers and smaller dark wets such as Bear Hairs, White-tailed Green Machines, Undertakers and Same-Thing-Murrays on nos. 8 & 10 hooks.

Andrew Anthony of Ledges Inn in Doaktown and Mountain Channel in the Rapids area said cooler water temperatures were helping them as well. The end of last week produced a half dozen grilse at Ledges, while Mountain Channel down river in the Rapids area hooked and landed seven between Thursday and Saturday. The Channel reported six so far this week (end of Tuesday) including an 18-pound salmon. They also had a few bright fish in the mix. The water remains very low with rain definitely needed.

Flies of choice were Bombers and small dark patterns such as Black Bugs, Undertakers, and White-tailed Green Machines on nos. 10 & 12 hooks.

Herb Barry Sr. of Herb’s Fly Shop on the Station Road in Blackville said the most fish he had heard reported were striped bass in pools where salmon should be. There were a few salmon and grilse around, but they were not moving due to very low water. “If they are moving, they must be taking the bus up river”, said Barry. There was an odd one taking, but certainly no numbers to speak of. There were hardly any anglers on the river.

Flies of choice were Killer Whiskers.

Curtis Miramichi River Outfitting in Blackville said anglers were catching a few fish in the low-water pools, with a mix of salmon and grilse. Most were old fish that have been in the system a while. Water levels were very low, but temperatures were adequate.

Flies of choice were small Green-butt Bear Hairs, Shady Ladies and White-tailed Green Machines on nos. 8 & 10 hooks, along with a few Bombers. 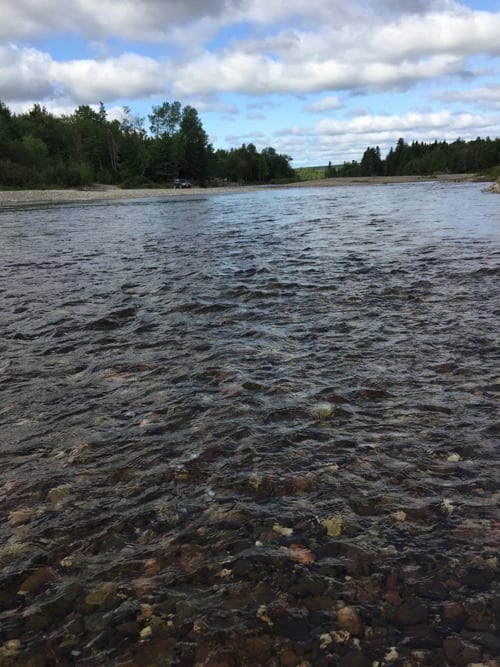 Photo by Elaine Gray showing how low the Little Southwest Miramichi is. The rocks are nearly out.

Jim Laws of Miramichi Hunting and Fishing in Newcastle, Miramichi reported very low water conditions, although cooler temperatures were producing an odd fish that were holding in the low-water pools. The fall return of striped bass has not started in the Miramichi area yet, but there were reports of some coming back in Miramichi Bay. Usually, late September and October produces the best fall results. Stripers that were reported up-river are those that did not go out after spawning.

Flies of choice were Ba variety of Bombers and small dark wet flies.

NOTE: We wish Jim a very HAPPY BIRTHDAY as he turns 80 this week, and is still going strong! Keep’er up Big Fella!

Syd Matchett of Trout Brook Fly Shop on the Northwest Miramichi said for very low water conditions, fishing was not bad. One angler hooked three salmon on Saturday while another pool produced a salmon and a grilse. Cooler night-time temperatures were the saving grace for low water. Syd added that there must be some water around as angler Lissa Mallais took an unexpected bath this past week.

Flies of choice were White Bombers with yellow hackle, Green Bombers with Orange hacle and small dark patterns such as White-tailed Green Machines and Shady Ladies.

Debbie Norton of Upper Oxbow Outdoor Adventures on the Little Southwest the water levels were low, but typical August levels. With decent temperatures, they were catching a few fish and losing a few which was pretty good considering the conditions. Like most, she is looking forward to a good Fall run.

Flies of choice were White-tailed Green Machines and Will Taylor Specials.

So a good couple of days of steady rain would be welcomed to bring up water levels up and hopefully kick off the Fall run. Then most can get out and “on the water”.

Thought for the Week:  “The solution to any problem — work, love, money, whatever — is to go fishing, and the worse the problem, the longer the trip should be.” – John Gierach