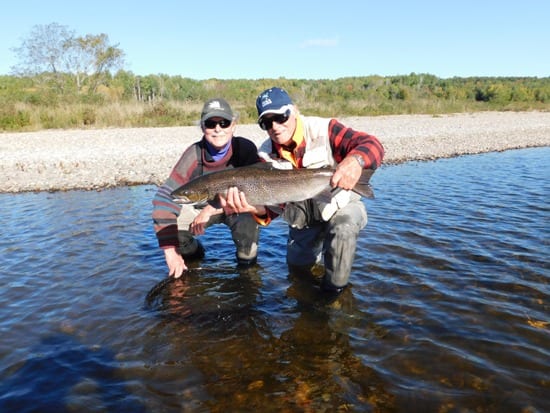 MIRAMICHI – For the most part, this is the last week of the season with Sunday, October being the final day of 2017 for salmon. Exceptions are the Bartibog, Tabusintac and Burnt Church Rivers which close October 29. So a big THANK YOU to all my sources for their reports this season.

Rain on Sunday/Monday of this week has given rivers a little bump in water height which seems to be bringing in more fish and getting those pooled up on the move. Thus we should have a decent finish to the season.

REMINDER: Striped season closes October 31 with a limit of two keepers a day between 50-65 centimeters.

W. W. Doak and Sons in Doaktown said it has been a pretty good week. The Doaktown area had a foot plus raise in water, with down river getting probably two feet. This has stimulated the Salmon to move and has improved the catching. One angler had three grilse and a salmon on Monday and another salmon. Tuesday was a tad slower as the water had not crested yet, but the end of the season should have perfect conditions for a last kick at the can.

Andrew Anthony of Ledges Inn in Doaktown and Mountain Channel in the Rapids area said they received about a two-foot raise in water which really got fish moving and virtually every pool had fish in it. They had been doing well prior to the rain, but Tuesday was slow, but he felt as the river began to drop Wednesday, they should have great fishing until season’s end. Mountain Channel also had been doing well, but the water was a bit high there at the moment. Both spots were seeing fresh fish with sea lice. He felt the Cains would also fish well to Sunday.

Herb Barry Sr. of Herb’s Fly Shop on the Station Road in Blackville said the weekend rain brought the river up and fish were moving. Anglers were seeing fish and catching some. Temperatures were good.

Curtis Miramichi River Outfitting in Blackville said there were good numbers of fresh moving through the system and anglers were catching some. Quarryville and Gray Rapids were producing. The water had come up at least a foot and the temperatures were good. Anglers had caught about 40 striped bass around Gray Rapids, some a pretty good size.

Jim Laws of Miramichi Hunting and Fishing in Newcastle, Miramichi reported a decent raise in water which got the fish moving. Anglers were seeing a lot and catching some, but they were not taking as well as most would hope. The striped bass were moving about in schools making fishing a bit spotty. The better fishing was down river, and bait was having the most success.

Flies of choice were Bombers and traditional Fall patterns.

Syd Matchett of Trout Brook Fly Shop on the Northwest Miramichi said there were a few fish around after the weekend rain, and some fresh.Paul Elson caught a salmon, and there were reports of several more. The water had come up some, but still was very low, but a good temperature.

Flies of choice were General Practitioners and Marabous, along with small Shady Ladies and Green Machines on nos.8 & 10 hooks.

So with season’s end on Sunday, this is the last chance to get out for salmon and grilse on most of the rivers, so get out and “on the water”.

Thought for the Week: “The trouble with fishing is it was better before you got there, and after you left.” – Unknown

Cumulative counts to date of salmon as of September 30

Cumulative counts to date of grilse as of September 30