Anita’s Gingerbread and the Creation of Christmas Traditions 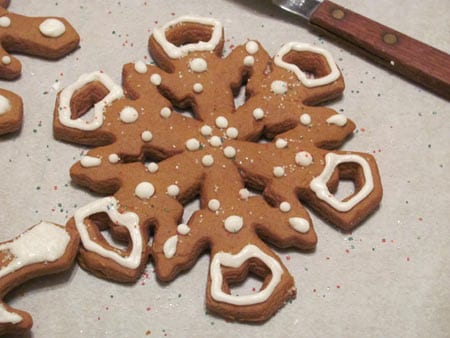 This story was originally published on www.breadnmolasses.com in December 2012.

Lo and behold, it’s that time of year again – Christmas! And it’s once again time to dig out favourite old recipes that make the kitchen smell of the season and our mouths water with anticipation.

In Bread n’ Molasses magazine’s previous print incarnation, I shared a few of my family favourites a couple of years in a row, so this year, in the new online incarnation, I thought I’d go with something different and share with you a traditional recipe one of my BFF’s used for years to make very elaborate, architectural gingerbread wonders.

This friend, Anita, got her recipe from her Finnish grandmother’s Lutheran Church Cookbook, so it goes back a long way. I have eaten this recipe when it was made by Anita. One year, after I had moved east, I was back at the west coast for Christmas and was able to see one of Anita’s creations for myself; before that, they had been a thing of legend for me since we always went our separate ways for the holidays. Her gingerbread house – no, village, complete with stained glass windows! – was miraculous to me. She did a new one every year, unique each time, very carefully planned, fun, and whimsical. I almost felt guilty eating bits and pieces of the one I saw because I knew how much work went into it. 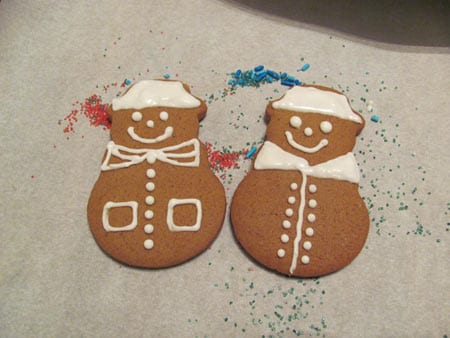 This year is a bit of a different Christmas for me. I’m living in a new city with new people, and I happen to have an eight year-old roommate now. Since doing lots of baking is my tradition, I asked her recently if she would be interested in making and decorating Christmas cookies with me one Sunday afternoon, and she became very excited. I don’t think she’d ever done anything like it before. So, a new tradition has perhaps been born. Looking for a killer gingerbread recipe, I immediately thought of Anita’s, and she gladly enough shared it with me. I bought some cheap Christmas sprinkles and away we went.

This is a spicy gingerbread and the smell as it bakes is amazing. For royal icing, I do nothing more than whisk together two egg whites and enough icing sugar to make a pipe-able consistency. Of course you can tint it if you want. The recipe is European, remember, which is why it’s partially in metric.

Anita’s Gingerbread (ingredients and method slightly adapted by me)

Cream together butter and sugar until light and fluffy. Add eggs one at a time and beat until well combined. Add molasses. Sift in the dry ingredients and mix until a soft dough forms, being careful to not overmix. Divide the dough into two discs. Cover well and chill for a couple of hours, or more ideally, overnight.

Using some flour on your counter, roll out the dough to, one disk at a time, desired thickness. A thicker cookie will be softer and chewier, while a thinner cookie will be lighter and crisper. So, for a thicker cookie, I’d roll the dough out to ½cm and for a thinner cookie, I’d roll the dough out to 2mm (which is what Anita does). Use desired cookie cutouts and place on a parchment-lined cookie sheet. Bake at 350F until golden around the edges – don’t overbake! Cool on wire racks. Decorate at will!

This is a large recipe that you can halve, but if you want a lot of fun cookies, by all means, make the whole thing!