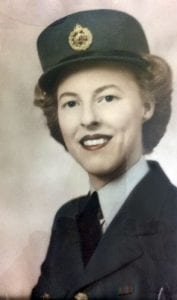 If there is any one person who shatters the stereotype of the elderly, it is Ella Curtis, born Ella Rosalie Mountain, of Gray Rapids, New Brunswick. At 94, a veteran of World War 2, she says, “I am not just going to sit around waiting to die. I’ll be doing something every day.”

One such ‘something’ was to get a tattoo. This was never a plan, but she had been talking to one of the nurses at her home. “The next thing I knew,” says Ella, “the nurse was on the phone with a guy named Chuck and she asked me, ‘Ella, do you want a tattoo? He’s interested in doing yours because he hasn’t done anyone that old.’ So the next thing you know, we were off. And I decided on a rose.” A rose, significant because, my second name is Rosalie and my husband always gave me roses for special occasions.” For weeks, Ella was a Facebook sensation and people still visit to see it.

Ella attributes her ability to look ahead, to the next something, because of her vivid imagination, a quality she developed in early childhood. “I don’t know what I would have done without my imagination. Maybe,” she says, “it’s because I was the first born and a girl and after me, my mother had three boys, one right after the other; there were no pills in those days. She’d get me up, dressed and fed before the boys because they were such a handful. She’d sit me in my little rocker and give me a book to read, turning it right when it was upside down and show me the cat. She’d spell cat and then I began to read. 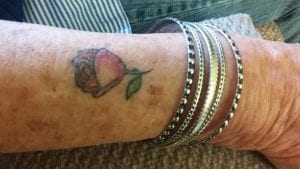 “The girls around were all older than me. The people across the road had all boys. And, since I had no one to play with, I was a loner. I had all my dolls and someone had made me a little table and chairs so I had tea parties. But then, the boys would come along and torment me by knocking my dolls over and grabbing the sandwiches. I’d go crying to Mom and she’d tell me to ignore them. That was awful hard to do. Sometimes I had tantrums. And I’d be lying on the floor screaming and kicking and my mother would walk around me, ignoring me. When my father came in, Mom would say, ‘Have you seen Ella? This little Sally Featherhole came up from the swamp and she’s making an awful ruckus. If you see Ella, send her home.’ And I’d look up from the floor and wonder why they couldn’t see me and it wasn’t long until Sally Featherhole went back to the swamp.
“Behind our house, there was a little woods and a bit of a swamp and then the river. I’d go down there to get away from the boys and I’d sit there and look up at the clouds in my own little dream, just like a little fairy. I could pick out flowers like lady slippers and daisies. I’d read books about princesses and princes. And I used to pretend I had this beautiful gown on and jewels and that I was in a castle and dancing with a handsome prince.”

Because of the depression, it was a very long time before Ella wore beautiful clothes. “It wasn’t easy. During those years, we had no money for clothes. And, you know what you’re like as a teenager, you like nice clothes. No one threw anything out. So I’d go to my grandmother Crocker’s in Newcastle and get an old coat. I’d take it all apart and turn it inside out and a woman who could sew would make me a new coat. When an aunt who had a shop in the United States sent up a box of unsold clothes, it was like Christmas.”

Ella attended school and dealt with bullies who mocked her clothes and looks. “It’s a shame that is still going on in schools today. I fell for my husband Byron in high school, was just crazy about him but we didn’t marry until we both got home from the war. After graduation, I went off to Ontario all by myself and got a job in a dress store in Toronto for a year.”

Back at home, the year she enlisted, Ella recalls Barnum and Bailey Circus coming to town and watching the train unload the elephants and tigers from the porch on her grandparent’s house. “A lion went missing and everyone was so scared till it was found, especially my grandmother who was worried about us. 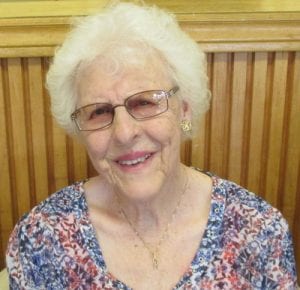 “There were posters for the army, navy and air force up all around town. My friend and I met two men from the Air Force and they told us that was the best place. The uniforms were much nicer as well. So, we went right down to the armoury and signed up in the RCAF Women’s Division. Six of us girls had our picture taken and it was in the newspaper when we took the train to Moncton. There we had to pass an IQ test and medical and were sworn in. I put my hand on the Bible and swore to serve my King and country and go anywhere in the world I was told to go. And then, it sunk in, Oh my God, what did I get into? But, then I put on my complete uniform and I have never known a more satisfying moment. Off we went to Rockcliffe, Ontario for our basic training. In the middle of the trip, we had to change trains and here we were running down the tracks to the other train, hair in rollers, carrying what we had, which wasn’t much, and laughing.

“Basic training was rough. You don’t know how they whipped us into shape. If I wasn’t tough before, I was when I finished; that old sergeant roaring at you and you had to respond immediately, no hesitation. After basic, I went to Belleville, Mountain View to a bombing and gunnery school where I taught aircraft recognition to the air gunners, then off to Toronto.

“The war changed everything for women. Before then, men wouldn’t accept women in the workforce. My generation was the first to break that barrier. We showed them we could do the same work they did, like the girls who worked on farms and ran old trucks and tractors. When the war ended, many women gave up their jobs, often regrettably to service men. But we had blazed the way for the working women today.”

On return and marriage to Byron, Ella taught school for four or five years. She and Byron had three children, Patricia, Peter, and Nancy. From all reports, Patricia, the oldest, encountered a second generation Sally Featherhole from the swamp. Ella has five grandchildren. 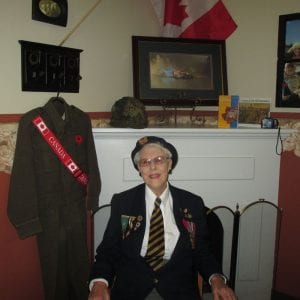 Interested in elections since high school, Ella worked elections and continues to be aware of party platforms. “Back then, the men would get a drink, there’d be chocolates and sandwiches, and then the candidates would get into a fight. It was great fun.”

Ella is content and happy with her life, even the hard times. “You grew up. It made you tougher, and more appreciative of everything. I had a good husband and family.”
She sums up the uniqueness of her generation. “We are survivors of the Great Depression, World War 2 and parents of the baby boomers. We are longer lived and more widely traveled than any generation before us. We have lived through many changes, from horse and buggy, to Model T Fords; from crank handled telephones to cell phones; moon walks and space shuttles and the internet. Many of us have computers, televisions; such wonders still amaze us.

Ella’s power to be amazed continues to come from her rich imagination. We all wonder what her next ‘something’ will be.

Judy Bowman is an award winning author. She has published fiction and poetry nationally and internationally in literary journals. In 2008, she was nominated for the Atlantic Newspapers Freelance Journalist Award and the same year, voted Favourite Journalist of the Year. She loves contributing to Gi’ver.

This article was originally published in the Christmas 2017 Issue of Giv’er Miramichi magazine.