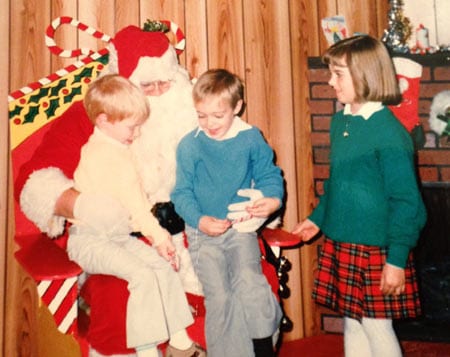 The Christmas party Sara’s dad’s Union threw for all the employees’ kids.

The annual childhood stress started shortly after Remembrance Day, when we went to the Christmas party my dad’s Union threw for all the employees’ kids. There was a magic show put on by a local amateur magician, unlimited free doughnuts and pop, and then a few hundred kids would chase each other around the hall like a pack of wild puppies until the lights were dimmed for the all important visitor in the red suit.

Escorted into the building by bored looking teenage girls dressed in somewhat inappropriately short velvet elf costumes and ringing hand bells, Santa was led through the crowd of awe-faced children for a bit where he would, “Ho, Ho, Ho,” until he reached his cardboard red and white striped throne near the hall’s stage.

All the kids would line up, trying to keep their squirming to a polite level after the sugar rush from the doughnuts and pop so they could get a chance to tell him what they wanted for Christmas.

This was the part that stressed me out.

When I finally made it to the front of the line where I had been waiting patiently with hands politely folded in front of me over my new Christmas dress and was assisted onto his lap by one of the elves, the boozy smelling Santa would lean in close and ask, “Have you been a GOOD girl this year?”

Of course I hadn’t. There were so many ways to be bad, and for a kid, a whole year was equal to eternity. It was like being set up for failure. So, fearing the public shunning in front of the hundreds of my dad’s co-workers from the plant and their kids that telling the truth might bring, I would lie.

“Yes,” I would quietly mumble to Santa, hoping that if it was hard to hear me it would be harder to prove what I had said later, when I was dragged into North Pole court and tried in front of a jury of elves. I would breathe a sigh of relief when Santa, seeming to believe my bald-faced lie, would ask what I wanted him to bring me on Christmas Day. I would keep my list to a polite minimum, perhaps just requesting the big ticket item in case my real list would make him suspicious as to my true character.

He would then mention I should try and be extra good for the next month because he WOULD BE WATCHING ME.

Okay, I would think on my way out to the car, I can do that. Maybe I can be so good all my past sins will be forgotten. I will be so good that Santa will use me in promotional videos, and I will become rich and famous because of my goodness. These virtuous thoughts would usually last until halfway home, when one of my two younger brothers would put a leg or an arm into my airspace, (or some other similar horrible injustice) and I would have to retaliate with a jab from my fist. But, I thought, Santa was probably still at the hall or on his way back to the North Pole, so there was a good chance he didn’t see what happened.

The agony of trying to be Christmas-Level Good continued on into the weeks before the big day.

My mom, knowing that the threat of “waiting until Dad gets home” was wearing thin, would resort to seasonal measures. She would call Santa directly. This was possible thanks to our party line, which you could use to make the phone ring back into the house by calling your own number and then hanging up.

She would call the North Pole and pretend that an elf would tell her that Santa was busy, but he would call her back in a minute. When the phone rang back, the three of us would burst into tears. She would tell pretend Santa that she wasn’t sure he should bother coming this year, because the kids were not bothering to behave themselves. Pretend Santa would mention he could hear the three of us fighting from the North Pole, and it was giving him a headache. He would ask if perhaps the three of us would apologize to each other and go take our baths, he might reconsider bringing us our presents. Of course, our good intentions were renewed and we rushed off with tear-streaked faces to carry out the wishes of Santa.

The height of the stress would come the night before Christmas, as I lay in bed thinking: what if Santa really didn’t come? I mean, it had been threatened many times before, so what if this was the year it would actually happen? I had never heard of an actual case of this happening, but I could be the first.

I went over my behavioural failures since my last meeting with Santa in my head. I fought with my brothers, I fed our overweight dog my unwanted supper under the table, I snuck cookie dough out of the fridge, I had gone snooping through the closets looking for presents, and went to school without a winter hat on, twice. I was screwed.

So I decided to do what many of us has done before, when faced with an impossible situation. I decided to pray.

I prayed to Santa.

Dear Santa:
I am sorry I forgot to be good. I tried hard, even if you think I didn’t. It isn’t really fair because I have two younger brothers who are badder than me, and they get me into trouble. If you promise to come this year, I will be extra good for next year.
Thank you in advance,
Sara.

Then I would pray to Santa.2, which was God. This may seem extremely sacrilegious to some people, but please see it from a child’s perspective. God and Santa have always been illustrated to look basically the same: an older white kindly-looking gentleman with a flowing beard who is either wearing a velvety red suit (the winter outfit) or a flowing white robe (the summer outfit). There was only a hazy distinction between the two when I was a young child. You can blame my Sunday school teacher if you are still offended.

Dear God:
I am very sorry I have been so bad. I feel horrible about it now. Please ask Santa to still bring me something off my list, even if it just a tiny thing, because it will be really embarrassing at school if I am the only kid I know to not get gifts this year.
Thank you in advance,
Sara.

Then, just to make sure I had covered all my bases, and mostly because I had just remembered the true meaning of Christmas, I would pray to baby Jesus.

Dear baby Jesus:
Happy early birthday!
I’m very sorry I was bad this year.
I promise to try harder so you won’t be sad.
If you have a moment, could you mention to Santa that I am trying to be a better person?
Thank you in advance,
Sara.

I would spend the next hour or so being very worried that I would be mortified and socially scarred forever by the lack of presents for me under the tree. I would wonder if there was anyone else I hadn’t thought of praying to, and wished that I had borrowed that book from the school library on witchcraft spells. I thought about how Santa would probably bring my younger brothers their presents because, as my Mom was fond of pointing out, they were little and didn’t know any better. This gut wrenching stress would eventually tire me out and I would fall asleep.

Christmas morning, usually around 5 am, I would wake up filled with both excitement and fearful anticipation, not so carefully pacing on all the creaky boards in the upstairs hallway to make sure everyone was awake, or soon to be awake. There was an unspoken rule in our family that we all had to go down the stairs together, so that the excitement and joy of Christmas morning could be shared equally. No one was allowed to “need” the one and only downstairs bathroom in the early morning hours of Christmas Day.

We would rush down the steep wooden stairs, where I would be filled with a gush of relief when I saw the first glance across the living room of our full stockings, hung three deep on the antique kitchen door hinges for lack of a fireplace.

All that praying for my salvation must have worked, and I was safe for another year.

Of course, the next year I would try harder to behave myself.

Sara Princiotta graduated from Trent University with a Bachelors of Arts degree in English Literature and Cultural Theory. She was born and raised in Ontario and now makes her home in Miramichi, New Brunswick.

This story was originally published on Breadnmolasses.com January 2013