A Mistle Thrush Comes to Visit 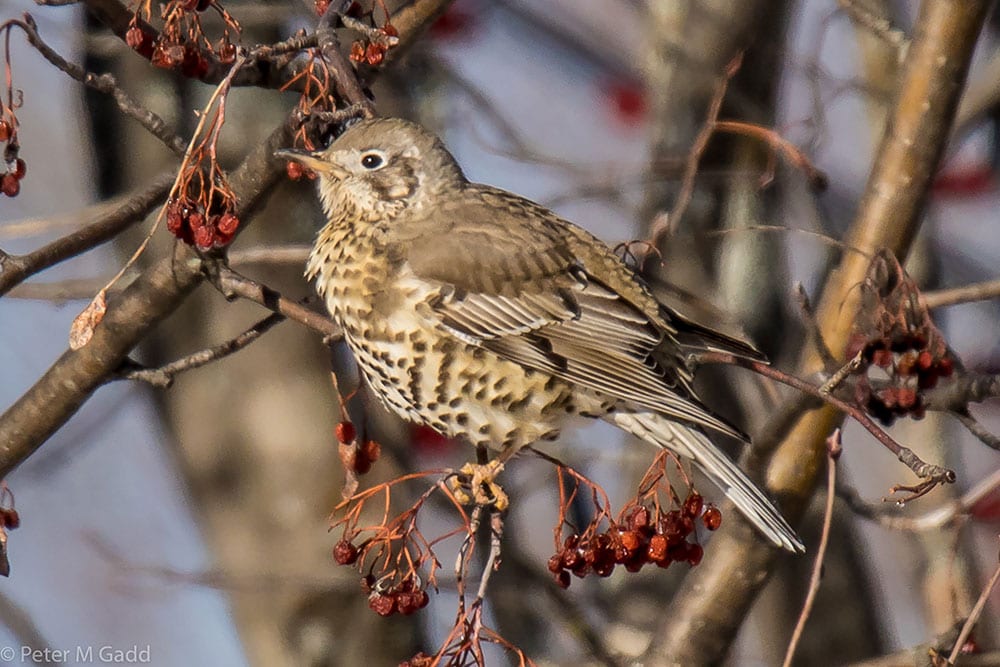 “Why not make our species first visit to North America to Miramichi, New Brunswick. It looks like a welcoming place”, says the Eurasian Mistle Thrush.

By December 9th 2017 it had made its way to a garden on Manny Dr. in the former town of Newcastle …. “why that’s a nice English name, I will feel at home here I am sure” it may have thought.

Perhaps this was what was going through the mind of this bird as it arrived at what turned out to be its resting area for at least the next 5 ½ weeks at the time of writing. All is green, berries plentiful and all of the other birds, “eh, no problem”.

Come December 10th ….  “Uh Oh” it may have thought,  … the green grass had became covered in white and wintery weather arrived. The Mistle Thrush, not one to look back, was not deterred. “I am a tough little one” it demonstrated. And so it continued, through snow storms, severe wind chill, rain and wind, wild temperatures swings and all manner of precipitation, this thrush flourished and in the meantime delighted many visitors from near and far.

It has been seen daily in a four block area feeding on mountain ash berries, basking in the sun, preening, and standing guard over its food. Flocks of  Bohemian Waxwing one hundred members strong, American Robins, and European Starlings  have all found out that they are no match for this aggressive vagrant when they try to snatch berries from under its “nose”. It seems that it knows there are some long winter days ahead before it can resume its normal foraging in grass and bushes for its balanced omnivore’s diet. Berries will do in the meantime … “and they are mine, all mine”.

There have been 400 or more visiting birders who have come to see this lost thrush from 7 Canadian provinces and 22 American States. All have been very, very pleased when they have had a good look and all have been very, very grateful for the opportunity. Many knowledgeable birders go to great lengths in pursuing their interest in the beauty, uniqueness and behaviour of their quarry. To see a bird never previously seen on the North American continent adds another aspect.  For quite a few visiting birders the Mistle Thrush was around the 800th, if not the 800th, bird on their North American list and some have seen more that 900. In New Brunswick the records indicate that over many years, 386 species have been reported.

The Mistle Thrush is a little larger than an American Robin, heavily spotted on its chest and belly, essentially brown on its head and back but with white trim on its wing feathers and tail. It is not a brilliantly coloured bird but the word “handsome” applies. Its behaviour is interesting to watch.

Its normal range stretches from Scandinavia to Northern Africa and as far east as the western Himalayan Mountains. It has been reported in Iceland. So why is it here? Most likely it got caught up in a weather system in the North Atlantic in early fall and was carried west by wind currents. Some have said post-tropical storm Ophelia in mid-October 2017 might be responsible.

It is thought that as long as it has a good food supply (mountain ash berries – of which there is a good supply nearby) it is likely to get through winter. It has demonstrated good survival behaviour by usually having coniferous shelter nearby when it feeds, it protects its food supply as mentioned above, and avoids predators such as Sharp-shinned Hawks which it has encountered several times. Will it return to Europe? Probably not.

It is very much a welcomed visitor to our neighbourhood and a delightful representative of the wonders of nature.

This article was originally printed in the Winter 2018 issue of Giv’er Miramichi magazine.