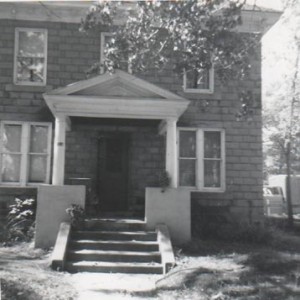 My grandparents’ home on Pleasant Street (now an Irving gas station). It was right beside the liquor store & we loved to watch the cars go in and out from the kitchen window.

My mom and I often took the train to visit her parents Lee and Inez Buckley in Newcastle, NB. We would take the Rapido from Toronto to Montreal and make the run for the connection to the train to her home town. Most times the seats on our trains converted into berths. Within about an hour of leaving Montreal the porter on the train would do the conversion into the berth and up we would climb into our bed for the night. That swaying back and forth and clickety clack of the train was a great sleep inducer.

I remember the porters always being very nice to us. And I recall looking out the windows as we travelled through New Brunswick the many hours. Many homes alongside the tracks were unique. My most memorable sight was the fact that most of these houses, shacks really, didn’t have glass windows—only tarp or some such thing. I wondered how they got through winter. Also, in looking back—how much of this memory is an exaggeration of my recall.

Our base was always my grandparents’ huge home. Nana and Pop always made certain they had my favourite foods on hand, Franco American Macaroni, Lipton’s Chicken Noodle soup and bread & butter pickle sandwiches.

I would spend almost my whole summer in this small town. My dad wrote almost weekly with little snatches of everyday life in Willowdale, things an eight or nine year old would love to hear. I still have some of this correspondence. 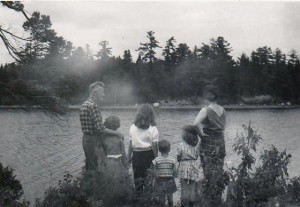 My Pop, myself, three of my Newcastle cousins and Mom at Wilson’s Point, 1960.

As I said, Newcastle was a small town and times were so different in the 50’s, or so it seems. Every day I would wake up in my big bed in the front bedroom of my grandparents’ home, run downstairs to a big breakfast—I seem to think it was often hot oatmeal. Then out the door I would go, running up the street and up the hill across town to my play with my cousins Angie, Alan, Cindy and Kevin, plus all the neighbourhood kids.

We roamed the town, up and down, around and around. Newcastle is on the Miramichi River and ocean going cargo ships were often docked not too far from the downtown square. Can you imagine, five to 10 young kids, the eldest maybe being eight or nine years of age and the youngest probably only three or four, climbing aboard these vessels and exploring, chatting with the crew, etc? There was even one fellow, whom we thought quite old with his grey beard and grey hair; we called him Santa. They gave us treats and stories. Nothing more, nothing ever happened. Can you imagine this today?

As it got later in the day and dinnertime approached, I would make my way back downtown to my grandparents’ home to have dinner with them. The evenings would be spent playing the piano, playing cards or watching one of the two channels they had on TV. 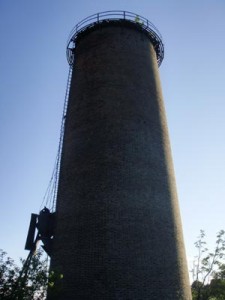 Old smokestake (all that remains) from my ancestors lumber mill (Buckley family).

Some of the nicest things about these trips were being close to my mom, my Nana and Pop meeting us at the train station upon our arrival, my many uncles and how they spoiled me, the freedom of roaming with my cousins in the town, and the sweet joy of coming home and running into my father’s arms when we got back to Toronto.

We did this trip many times and once I did it on my own at age 14 during an Easter break. What bravado, taking the train to Montreal on my own then transferring to the train to Newcastle! It’s a good thing I had done it many times with my mom; it was almost like I could do it in my sleep. I don’t know how she let me do it. I cannot imagine myself having let my sons do something like that at that young age. Times have changed.

This past summer my mother and I took a journey down to her home town. While there my Uncle Paul took me on a drive through the town. It’s interesting how many memories came flooding back.

We drove past my great uncle’s old home and I could remember visiting him as a child and sitting in his library on his big old brown leather chair. Then we went past the old library, that was no more, and amazingly I could still smell that old place, really could smell it. Down to the city square … I could visualize my cousins and I running around with ice cream cones and hoping that Uncle Paul would take us to the Chinese Restaurant for lunch. When we drove past the spot where my grandparent’s home had once been I swear I saw an image of our old cat Marmalade. I can only imagine what memories my mother was resurrecting.

While there my mother and I took a trip to Burnt Church to visit with her cousins and my cousin Sandy whom I hadn’t seen in at least 30 years. An afternoon of drinking wine, looking out over the bay, was one of the highlights of our trip; it was a crazy day no doubt. I even found out somehow we have some royalty in our family—well royalty that was born on “the wrong side of the blanket”, something about Mary Queen of Scots and the Duke of Murray. My cousin said she had once had some of the old coins from some type of support regarding this dalliance, but she sold them when she moved to Ireland. Will we ever know the truth?

We flew back home to Toronto on the hottest day of the summer, glad to be back, but with a trunk full of memories.

Mary Mondoux was born in Toronto in 1951 and spent most of her summers as a young child and youth at her grandparents’ home (Lee & Inez Buckley) in Newcastle, New Brunswick. She spent many days with her cousins Angie, Alan, Cindy and Kevin Walsh, and their neighbours (one of whom was the writer, David Adams Richards). Mary still has family there including Jack, Robert and Paul Buckley and their families, Nan and Tom Creaghan, and Sandy Bunting, whom she had the pleasure of visiting during the summer of 2011. She currently lives in Toronto and is married with two sons, aged 22 and 24.

This post was submitted by Mary Mondoux and was first published on Givermiramichi.com in 2012