Laney & Alecia | Playing On Our River

One of the best parts of being a summer student at Discover Miramichi is the many exciting road trips we get to go on (or as we often call them “field trips”)! We were excited to head to the Village of Doaktown for a day of playing on the river. Unfortunately neither of us had a lot of data to use google maps, and so we were hoping to be able to find our way around with ease. We were very thankful to see that there were many road signs out for directions, a huge help for us.

Our first stop was at the Atlantic Salmon Museum where we met up with the “Come Play On Our River” summer camp leaders. Come Play On Our River summer camp allows young kids to experience the Miramichi River and all that it has to offer. They learn the basics of casting, water safety, fly tying and trout fishing. Arthur Robinson is the camp coordinator, along with two of his experienced summer students who were  once campers. When we arrived, it was snack time for the campers, and while they had their snack, we had time to check out the aquarium where we saw turtles eggs in the incubator awaiting to hatch, turtles swimming and many fish. Window scrapers were there to get a better visual if the tanks had condensation. The aquarium is made possible by funding from the New Brunswick Wildlife Trust Fund in partnership with the Atlantic Salmon Museum and personal donations from the community. 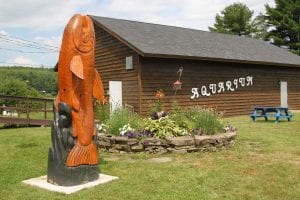 This was their fourth week of camp for this summer. We got to see the group of Lil’Tykes who were ages six and seven. The group that we saw were all boys and did they ever like their fishing! We began our visit by tying salmon flies, with help from the camp leaders. The day before they kids tied the Green Machine fly, whereas this time they were tying a salmon fly called the Buck Bug. The Buck Bug is the most popular salmon fly on the Miramichi. It is an Eastern Canada invented fly for Atlantic salmon and is used as a sub-surface fly.

Laney was into the fly-tying action; Arthur was close by with instructions as this was her first attempt at making one. Every step they did was told out loud to us, it was so delightful to see the interest these campers had for fly fishing. Whether it was cutting off some deer fur, or carefully tying the feather around, both us and the campers enjoyed the experience. 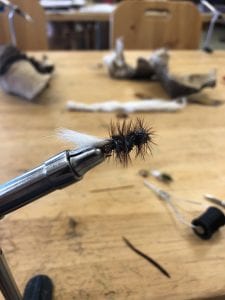 After the flies were tied, Arthur suited up in his waders and the kids put on their hats, sunglasses and lifejackets. We all headed outside, and we watched them fish in the river; the summer students informed us they had practiced casting the previous day on land so they could get a feel for it. We observed them fishing for a little while, and we both could agree that you couldn’t wipe the smile off of their faces even if you tried to. We bet it was a task to get those little boys out of the water. 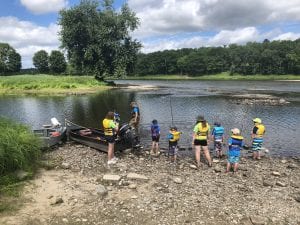 We thanked the leaders and campers for allowing us to spend some time at camp with them, and with that we headed to our next destination Storeytown Cottages. The drive to Storeytown from the museum was short and sweet, it wasn’t any longer than ten minutes. Pulling into the driveway heading to these cottages felt like a home away from home. Four cottages are available along with four kitchenette suites. What drew our attention to the cottages even more was their names. Each cottage has their own name which fits just for them. One of the smaller cabins is the love shack, perfect for a romantic getaway. Another cottage is called the Big Oak, it is made entirely of cedar and it is the largest addition to the cabins. We loved the fact that they have a sauna and a hot tub on site. These are great assets for guests as Storeytown is open for the winter as well. As we made our way to the office, the owners, Christine and Jeremie were nearby loading their vehicles with tubes which campers and the public are welcome to rent! 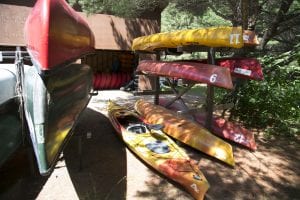 As we have already been tubing a couple times this summer, we wanted to discover the other availabilities. We pondered on the idea of kayaking or canoeing, but we ultimately decided to be adventurous and test our balance with the stand-up paddle boards. This was a first for the both of us, and we were filled with so many uncertainties. Jeremie was very reassuring and was able to answer any questions we had along the way to our drop off spot. He was a good sport, as we made a few rookie mistakes. Alecia was first in the water and she first forgot to attached her ankle strap, and then left her paddle behind. Good thing Jeremie was there! He was also helpful as we asked him to catch a few photos of us attempting to stand up for the first time at the beginning. To our surprise we were both able to get up with no problems. The moment we were fully comfortable on the board the fun and relaxation began. We met some kayakers and tubers along the way. We both had so much fun, and continuously said how we already want to come back! 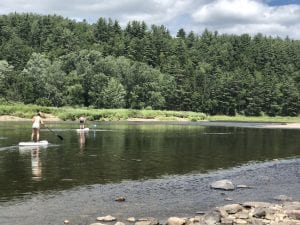 We floated along the river until we saw the signage for Storeytown, again we headed back to the office where Christine and Jeremie were very interested in our journey. We got our phone and car keys back, and it was then that we met their adorable mascot Scotch. Scotch is a very well behaved and friendly dog who loves to meet new people. We loved meeting him, and everything about Storeytown Cottage, we already can’t wait to go back for another visit!