It was with great sadness that I learned of Raymond Fraser’s passing the other day. Sharon, his ex-wife had posted on his Facebook feed that Ray was ill and in hospital in Fredericton. He wasn’t suffering, she said and he soon died peacefully. He was 77 years old. While I had met Ray several times when he came back to Miramichi to launch one of his books, and we were “friends” on Facebook, we never exchanged more than a few words either in person or online. I did though manage to get him to agree to an interview for The Miramichi Reader in 2015.

You may also enjoy: The Raymond Fraser Interview

When Ray first got a tablet a couple of years back, he had fun posting short videos and selfies on a regular basis on his Facebook feed. However, in recent months, his Facebook posts started to noticeably taper off and I had the feeling that something was wrong. The last time I saw him was in June of this year when he was at Chatham’s Saltwater Sounds to launch his most recent book Through Sunlight and Shadows which would prove to be his swan song. 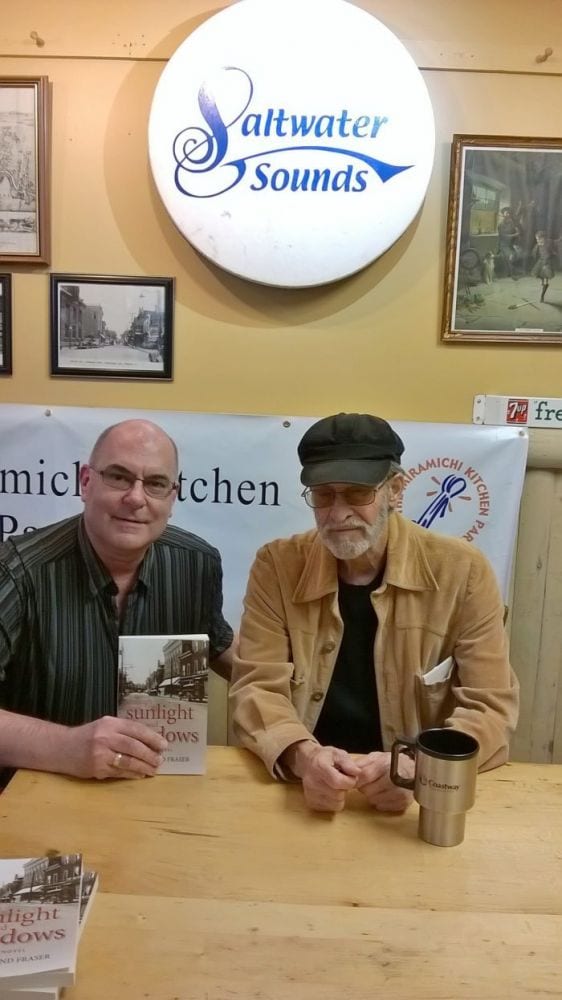 My introduction to Ray’s books is quite recent, after my move to New Brunswick from Ontario in 2008. My wife and I were in Bathurst where the SPCA there runs a used bookstore. On the table, as I entered was an older softcover book with a photo of Newcastle’s Black Horse Tavern on the front. Having an interest in local authors wherever I travel, I picked the book up for a few dollars and brought it home. I set it aside and later took it on a small vacation to the Bay of Fundy. “They Come Here to Die,” the first story, had me hooked on Ray’s style from the beginning. The two characters, Ralph and Danny are aimless, penniless and bored with living in Bannonbridge (the fictional name for Ray’s Chatham). All they want to do is drink, and they dream of going to Toronto where they can make some money and have a life, or so they believe. In Ralph’s threadbare, chilly rented room in an old house, they make their utopian plans:

They heard the sound of slow feet shuffling in the hall, passing the door and ascending the stairs. They listened until the footsteps were gone.
“Another old man,” muttered Ralph. “This house is full of old men, they all come here to die. I shouldn’t be here. I’m not an old man. I don’t belong here.”
He picked up his trumpet and blew a deafening defiant blast. A sharp knocking sounded on the wall.
“Who’s that?” said Danny.
Another old man. Or maybe it’s an old woman. They don’t like to hear me playing at night – or anytime for that matter. They want to die quietly.”
What we need – we gotta get out of here, that’s what,” said Danny. “I mean out of town. We’re both wasting our talents here, especially you, not so much me since I don’t have any, but I’m getting sick of this place. I’ll never get anywhere in a dump like this. We should just get up and get the hell out, just like that. No wasting time.”
“Where would we go?”
“Anywhere. Montreal. No, Toronto’d be better. Montreal’s full of crazy Frenchmen, we’d never get along. Toronto.”
“You can’t go anywhere without money. How would we get there? What would we live on?”
“It wouldn’t take much. I could probably steal enough off the old man. We get a train up, then we get a job, we’d soon be living pretty good. The booze is cheaper too. Lots of broads around, be no problem.”

It was the sheer hopelessness of their present situation (partly because of their addiction to alcohol, coupled with their unemployability) yet, they still felt things would be different in a big city but really it was a pipe dream that neither one could attain, nor would they ever. Later Ray would write of young Walt Macbride’s foray to Toronto accompanied by his friend Sully. That didn’t pan out as planned and they hitchhiked all the way back east to New Brunswick. (Later, I was pleased to discover that the first edition (1972) of The Black Horse Tavern was quite rare. I had it signed by Ray the first time I met him, in 2009 when he launched In Another Life.) 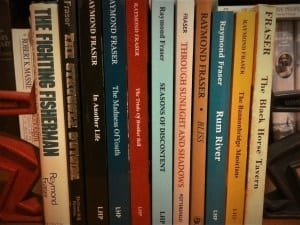 Essentially, all of Ray’s fiction was semi-autobiographical, Walt Macbride being Ray’s incarnation in his stories, and other characters such as Sully and Ralph were based on people he knew and grew up with. Ray’s stories (and his early years) are like the flip side to Wayne Curtis’ upbringing in the rural up-river villages and settlements of the Miramichi. Ray was a city boy, Wayne the country boy, spending his days on the farm and fishing the river.

Awards and Recognition
As well as the Order of New Brunswick and an honorary degree from St. Thomas University, Ray was the recipient of New Brunswick’s inaugural Lieutenant-Governor’s Award for High Achievement in English-Language Literary Arts in 2009. His book The Bannonbridge Musicians was runner-up for the 1978 Governor General’s Literary Award for Fiction. In 2007, When the Earth Was Flat earned The Bernell MacDonald Prize as well as the Lion’s Head Best Book of the Year Award. Five of his books are listed in the 2009 publication, Atlantic Canada’s 100 Greatest Books, a distinction shared by only three other authors. In 2018, he was awarded the Senate Sesquicentennial Medal.

I was fortunate to have met the man who lived such a full life, who even managed to cheat death a few times, and was able to author many works of fiction, poetry, and non-fiction. My own collection has a few gaps in it that I would like to fill, and thankfully Ray was able to revise and update some of his earlier works, which were published by Lion’s Head Press. Here is the link to my reviews of several of Ray’s books as well as an interview with him from 2016: http://miramichireader.ca/category/atlantic-canada/new-brunswick/miramichi/raymond-fraser/

I should mention that Ray was very helpful in getting The Miramchi Reader off to a good start, for which I will always be grateful. He was kind enough to share my reviews of his books on social media and, from time to time, on his personal blog.

Senator David Adams Richards called him “one of the great independent writers” in the country.

If you’ve never read one of Ray’s books, I encourage you to pick one up. Goodbye, Raymond Fraser, and thanks for all the books! 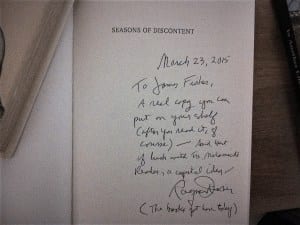