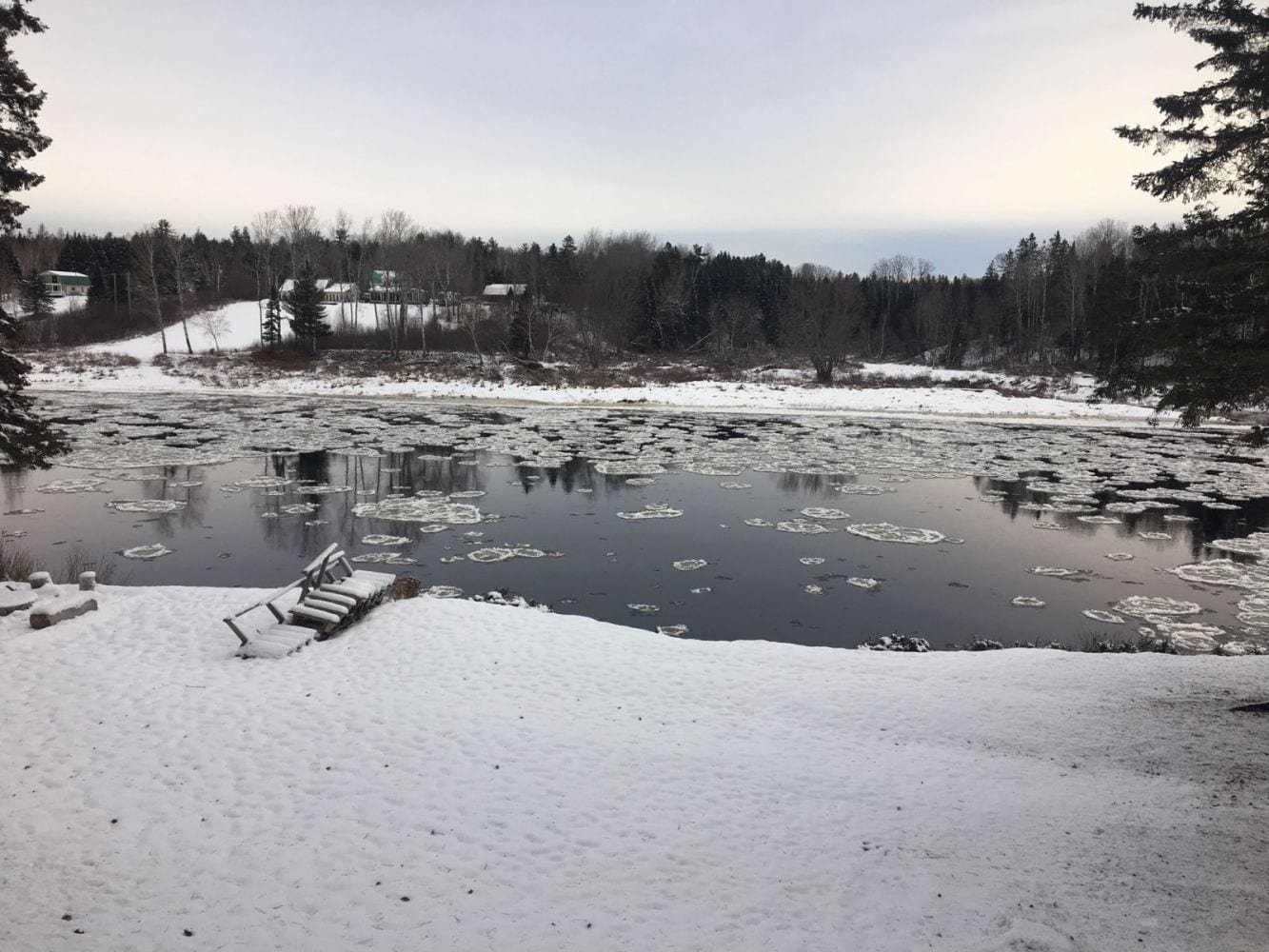 The picture above was sent this morning by Jason Curtis of  the river in front of his home.  The Campbell’s Pool house is in the far upper left of the picture above.When I look out the window, and then down at the date on the corner of my computer screen, things don’t seem to mesh. We are in the middle of yet another snow storm, and this one may accumulate up to 10 inches over the Miramichi valley.  This much snow by mid-November is really unusual.  The temperatures also are unusual.  It is wintery cold now, and it is forecast to stay that way for the foreseeable future.    With the temperatures forecast for next week to be well below normal night and day, it is likely that we will see the rivers frozen across by sometime next week, and that’s almost a month earlier than some recent years.

What will all this mean? According to a paper by Atlantic Salmon researcher R. A. Cunjak of UNB: “ A strong relation was found between winter discharge and interstage survival (egg to 0+, 0+ to 1+, 1+ to 2+) in 5 of 6<~>years. That is, juvenile salmon abundance in summer was highest following winters with high streamflow, presumably a function of habitat availability, especially beneath ice cover. However, the lowest measured egg-0+ survival (9.2%) was related to an atypical midwinter, dynamic ice break-up triggered by a rain-on-snow event that resulted in severe scouring of the stream-bed and redds.” With all the recent precipitation we certainly have the strong flow, and it looks like we will soon have ice. According to Miramichi guide Darrell Warren the old-timers prophesized that years of November freeze up ended with mid-winter break ups. That would be counter-productive, so we’ll have to hope for this winter to be an exception.

Final Trip to the Cains

I can never get enough opportunities to be by the banks of the Cains River, and I made a trip the first week in November that killed two birds with one stone. First, I had lunch in Doaktown with Darrell Warren and an old friend of his who graciously lent me a photo album of century old snap shots of Hopewell Lodge that was located on the banks of the Cains a couple of miles up from the Grand Lake Road. The history of Hopewell is fabulous, and I’m going to include a selection of these historical photos in my new book On the Cains: Atlantic Salmon and Sea-run Brook Trout on the Miramichi’s Greatest Tributary. That book is being edited and designed now, and should be out next summer. Here are a couple of sample photos: 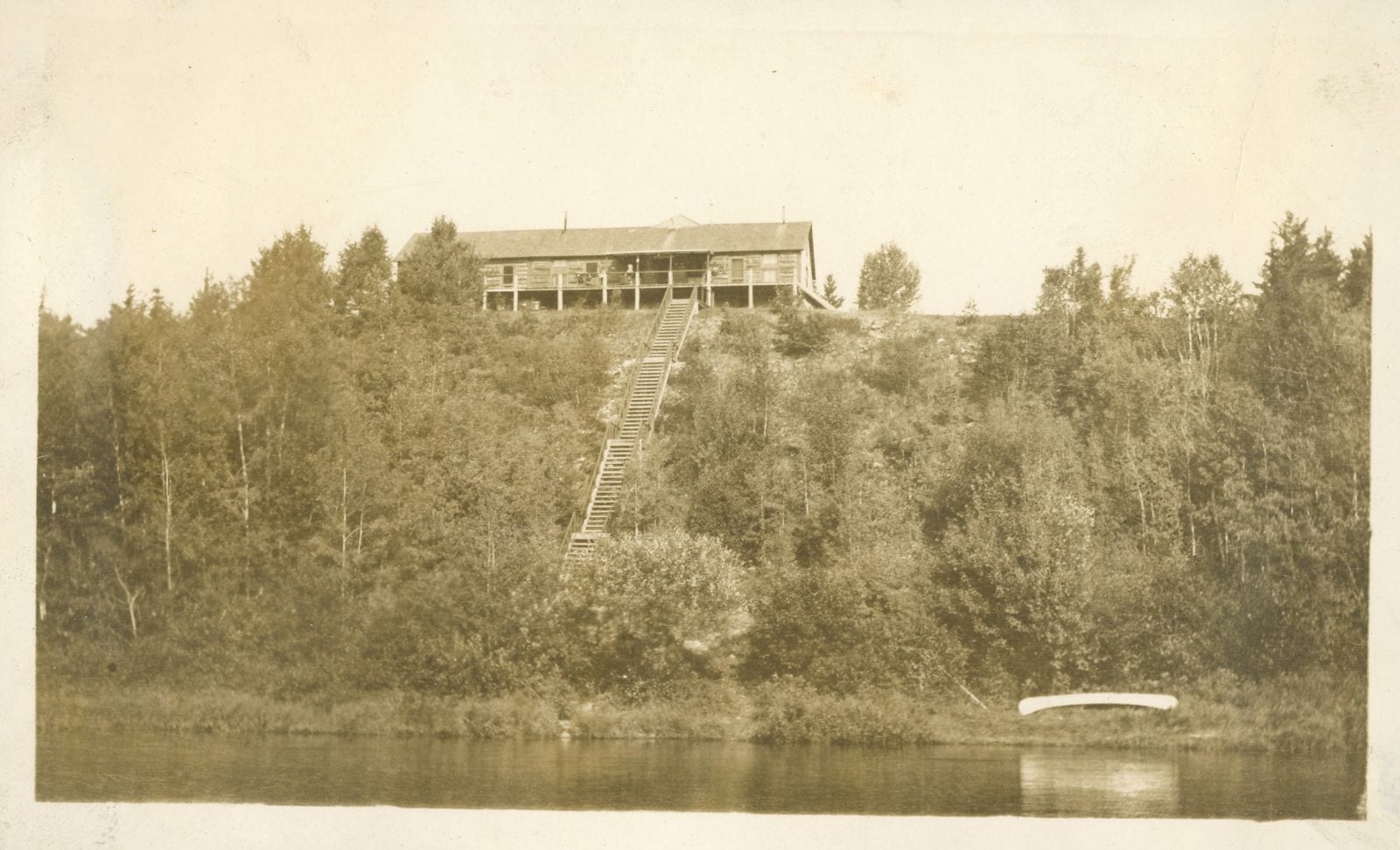 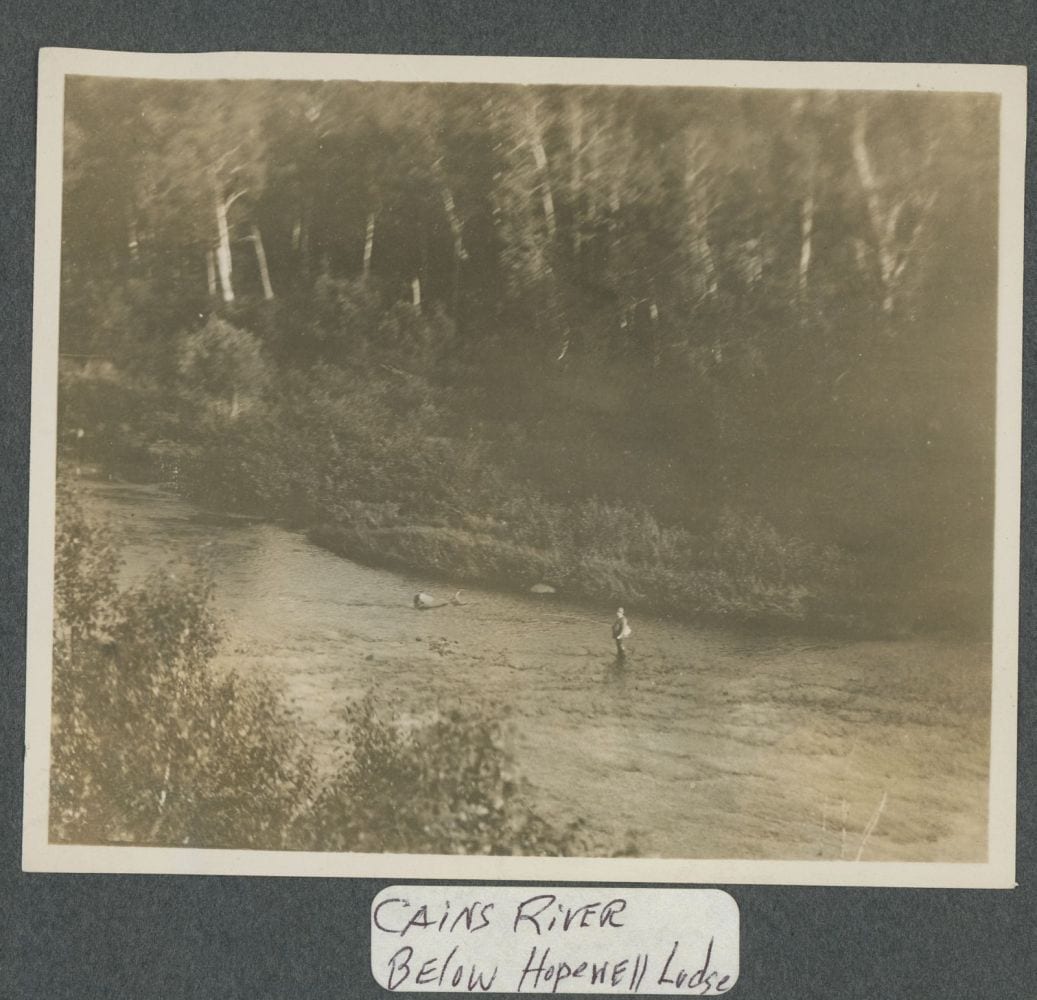 Cains River, below the Hopewell Lodge

After lunch I headed in the Shinnickburn Road for the 10-mile, dirt-road-drive to the Mahoney Brook camp. Now that essentially all the roads leading in to the Cains are of a “non-maintained” status, they are quickly becoming 4-wheel drive paths. Darrell and Jason had been in before me, thankfully, and cut up and dragged off the road some of the large trees that came down in the big wind storm of 11 3 2018 that took out so much of New Brunswick’s power. Still it was a tight fit to get through in a regular pickup truck. 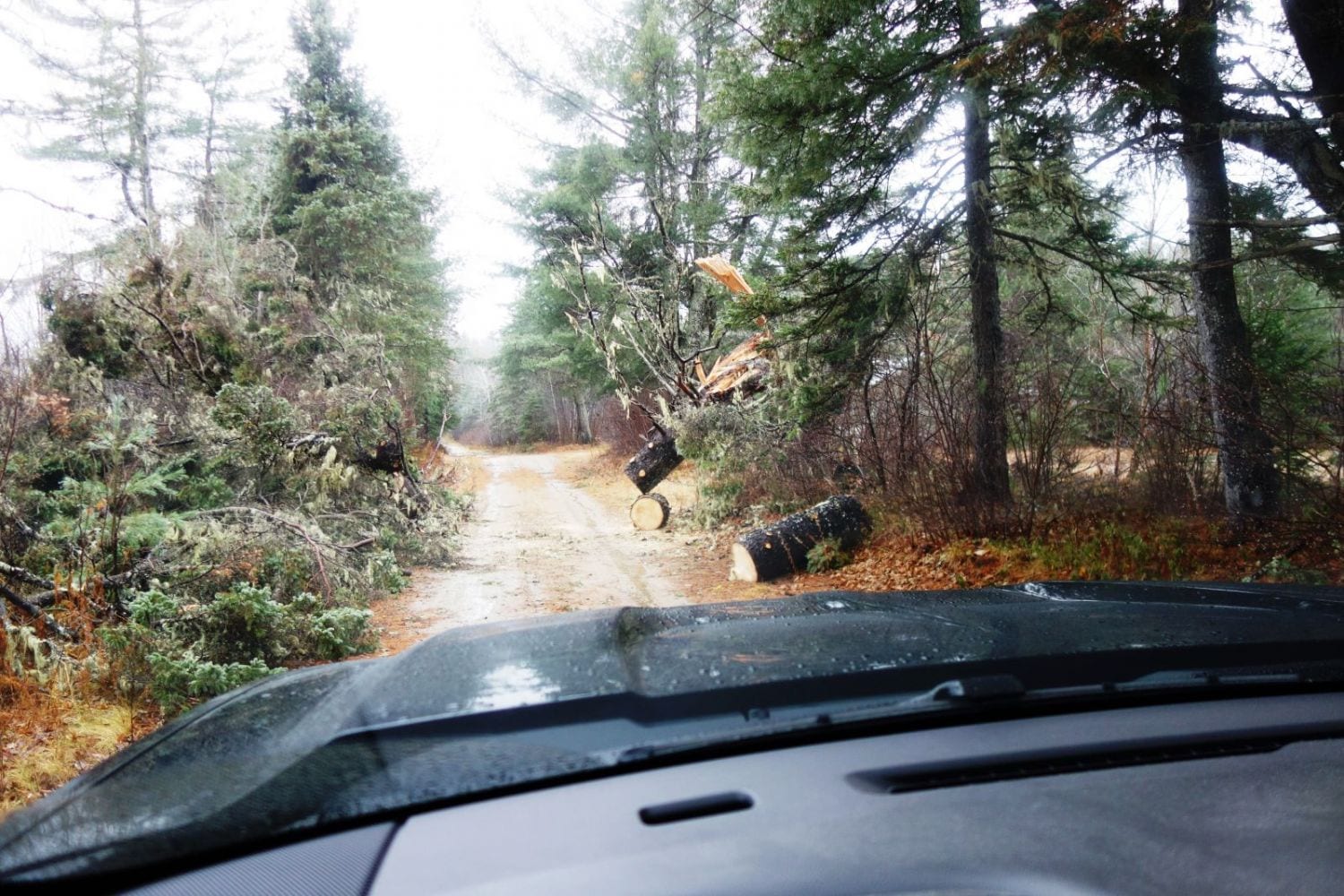 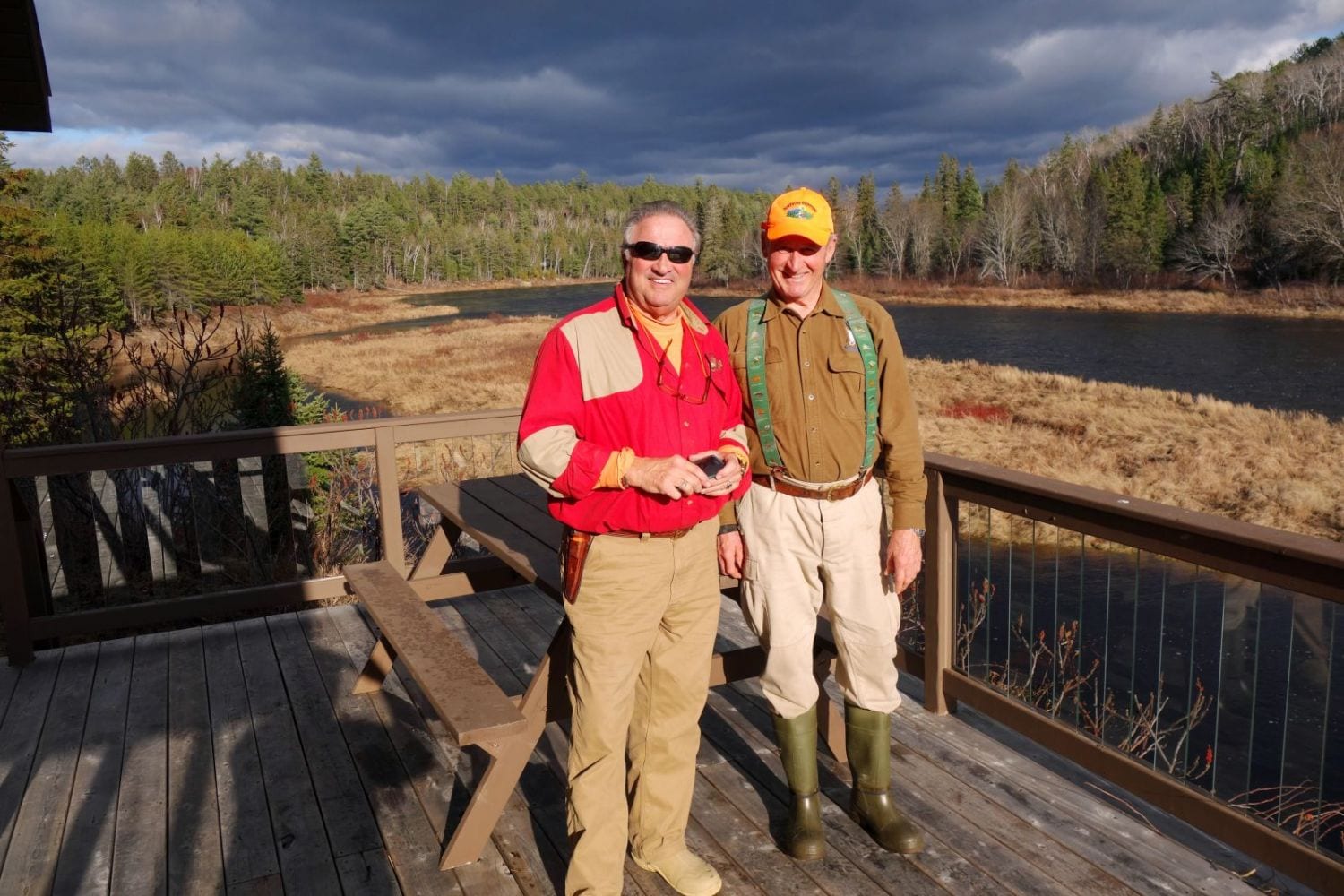 Water was high on the Cains, and I didn’t venture out onto the river as I normally would, but it was wild and beautiful as usual. New Brunswick friends David Wade – Charlie Wade’s grandson – and Dawson Hovey came over for a visit and we walked around to a number of the pools that we would have been fishing 3 weeks previously.

I love to get on the road early, and just before I closed the door of my truck to drive out I could hear the wind in the high branches of the spruce trees and bare limbs of the maples surrounding the camp. It has been a favorite sound since childhood. It was a great note on which to hit the road. 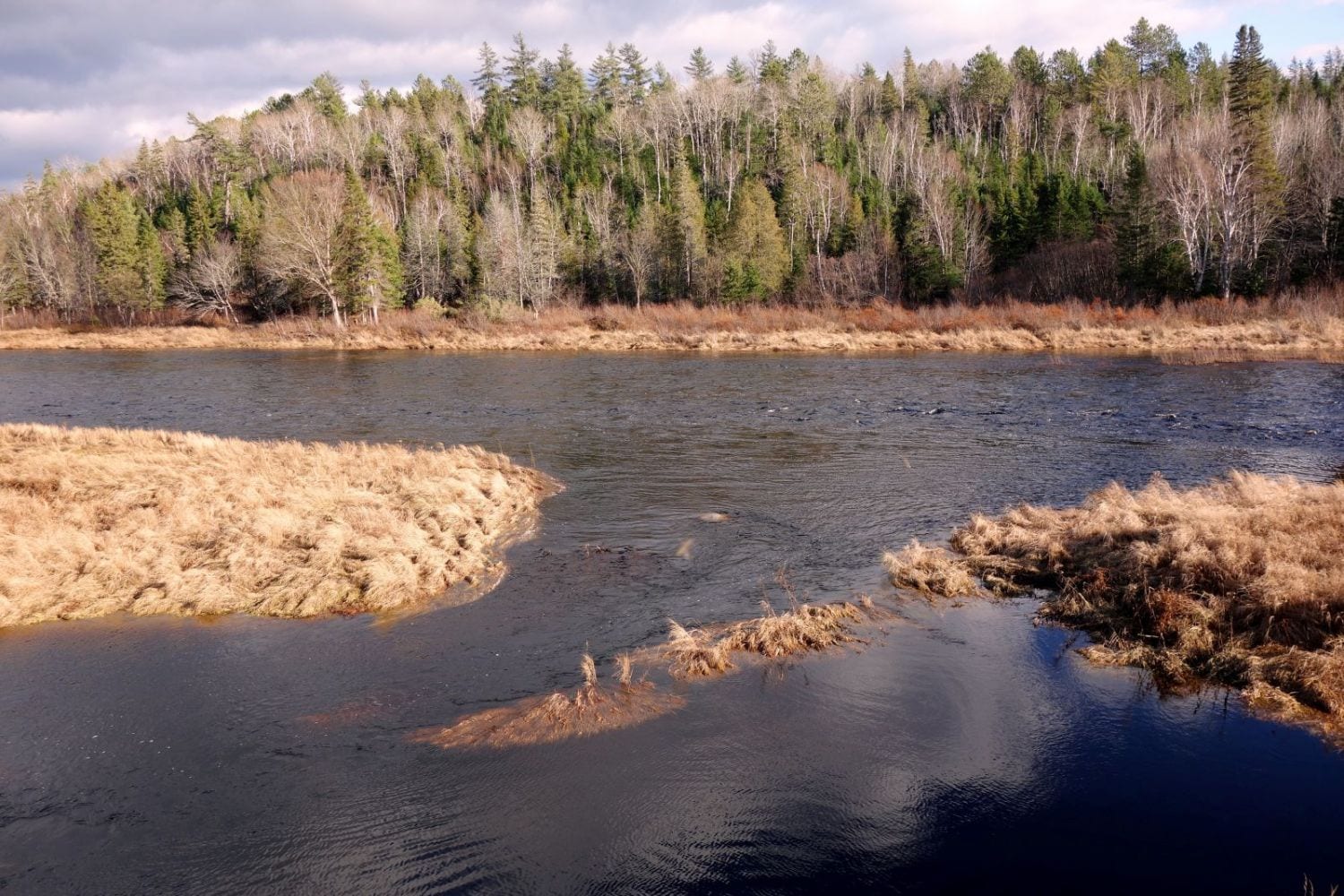 High water on the Cains. The rock barely underwater in the center foreground is a 3-foot-tall boulder that is normally almost entirely out of the water.

If the analysis is anywhere near correct, the percentage of Miramichi smolts making it out of Miramichi Bay in the spring time is about a third of what it was 20 years ago. Tagging studies show that this is almost undoubtedly the fault of the runaway striped bass population, and it is largely responsible for the precipitous decline in Atlantic salmon returning to the river. There is a great controversy over what to do about it, and the Department of Fisheries and Oceans is slowly allowing a few more striped bass to be taken. The relaxed catch restrictions include a First Nations commercial fishery allowing up to 50,000 bass to be harvested. That fishery is underway now, and we can only hope that it will make some dent in the enormous striper population, and that a much larger quota will be given in the future. This solution seems entirely reasonable to me as it takes pressure off the salmon that First Nations has also harvested, it provides jobs and money to First Nations people, and potentially can help bring the striper population down to a level where they won’t decimate every other fish that has historically lived in the Miramichi with them. I also hope that DFO will allow a commercial fishery for non-First Nations people too, as that seems only fair to me. Here are a few pictures from the website of the wholesaler who is buying up this catch: 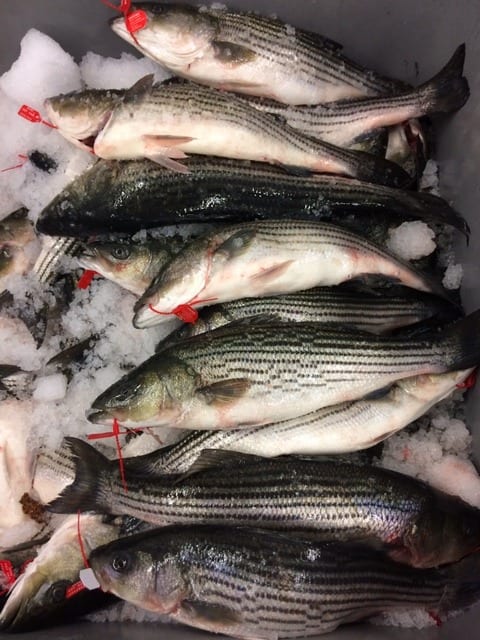 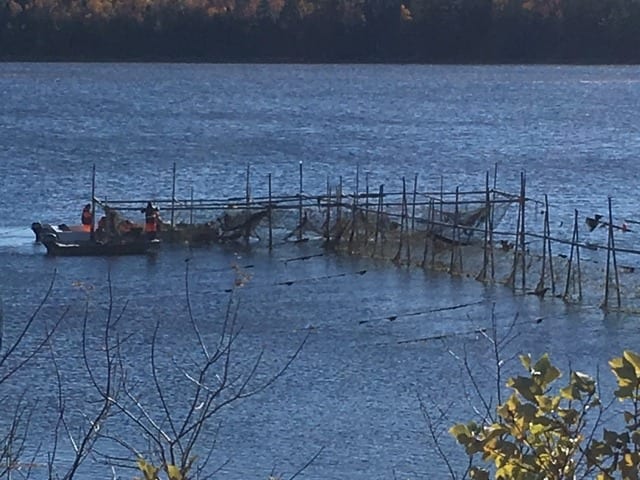 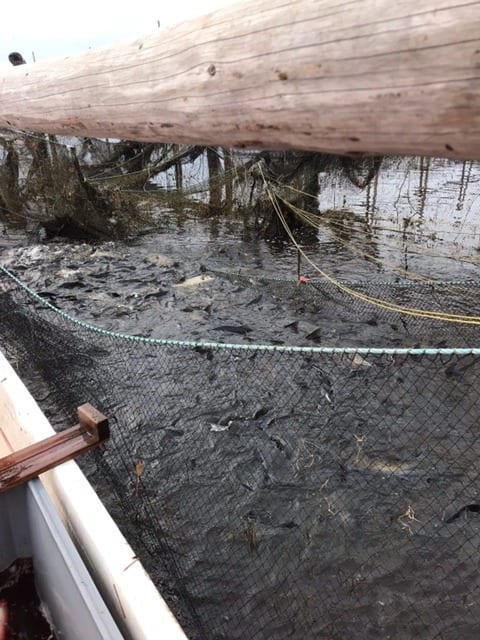 When my Scottish fishing friends grumble about having to wait until February to start fishing again, I have to laugh. How about waiting until May? I find various ways to pass the time – some of it productively – while I wait for winter to end. Going through all of my flies and tackle, reading, writing, and winter projects like the refurbishing of canoes or things for the camp keep me in touch with what I love. I’m putting a Kevlar layer on the stern of a 26’ Sharpe jet canoe this winter, and I will later do a blog with photos of that work. I also put out a little feed for the birds and animals that live around my home in Falmouth, Maine during the winter. I use trail cameras to keep track of the comings and goings of the deer, especially during the rut, which is right now. Many of you who are hunters will be familiar with trail cameras, and seeing night time wildlife pictures is nothing new, but in any case here are some pictures of deer, including a really nice buck, and a coyote from a recent evening: 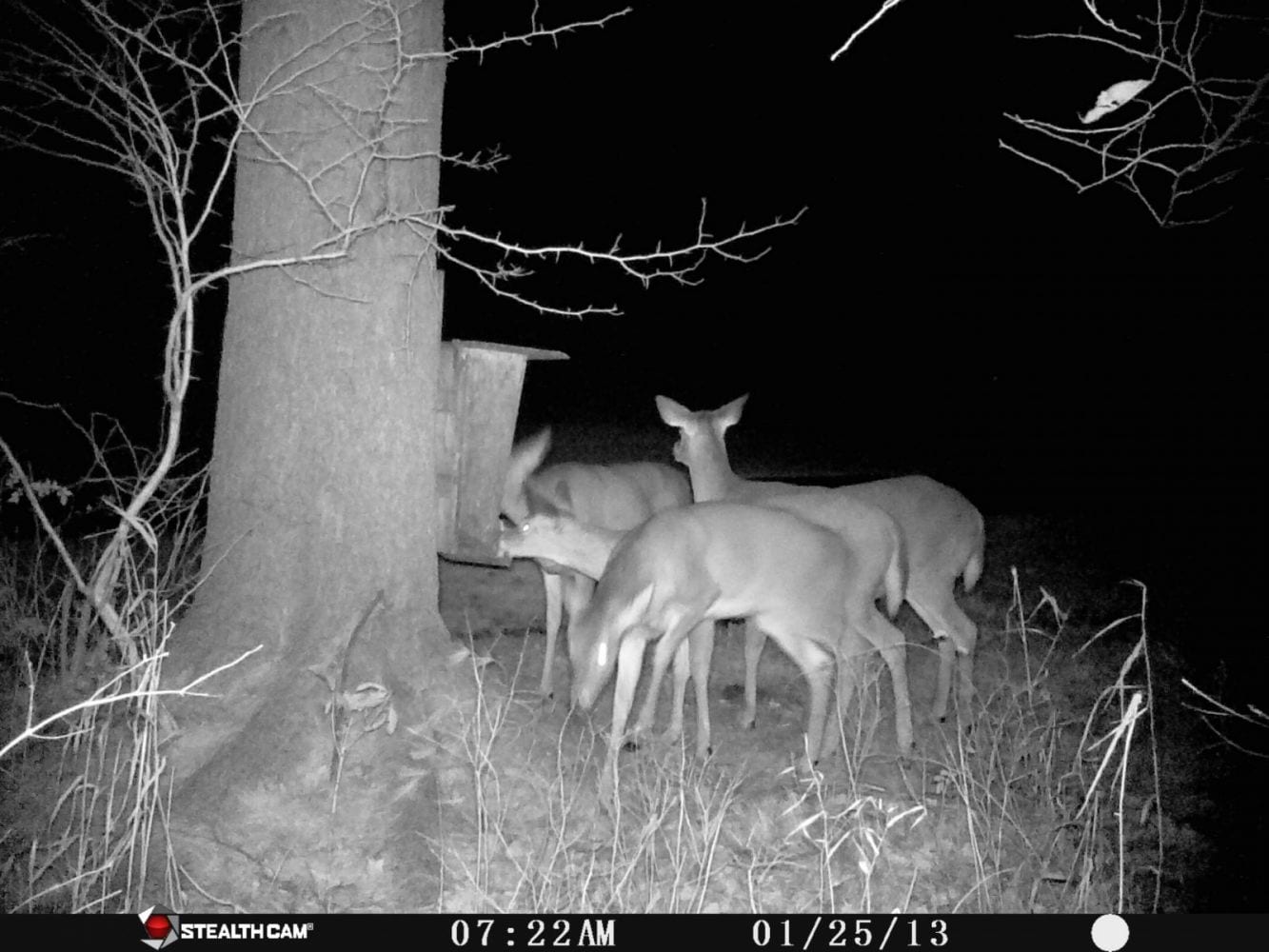 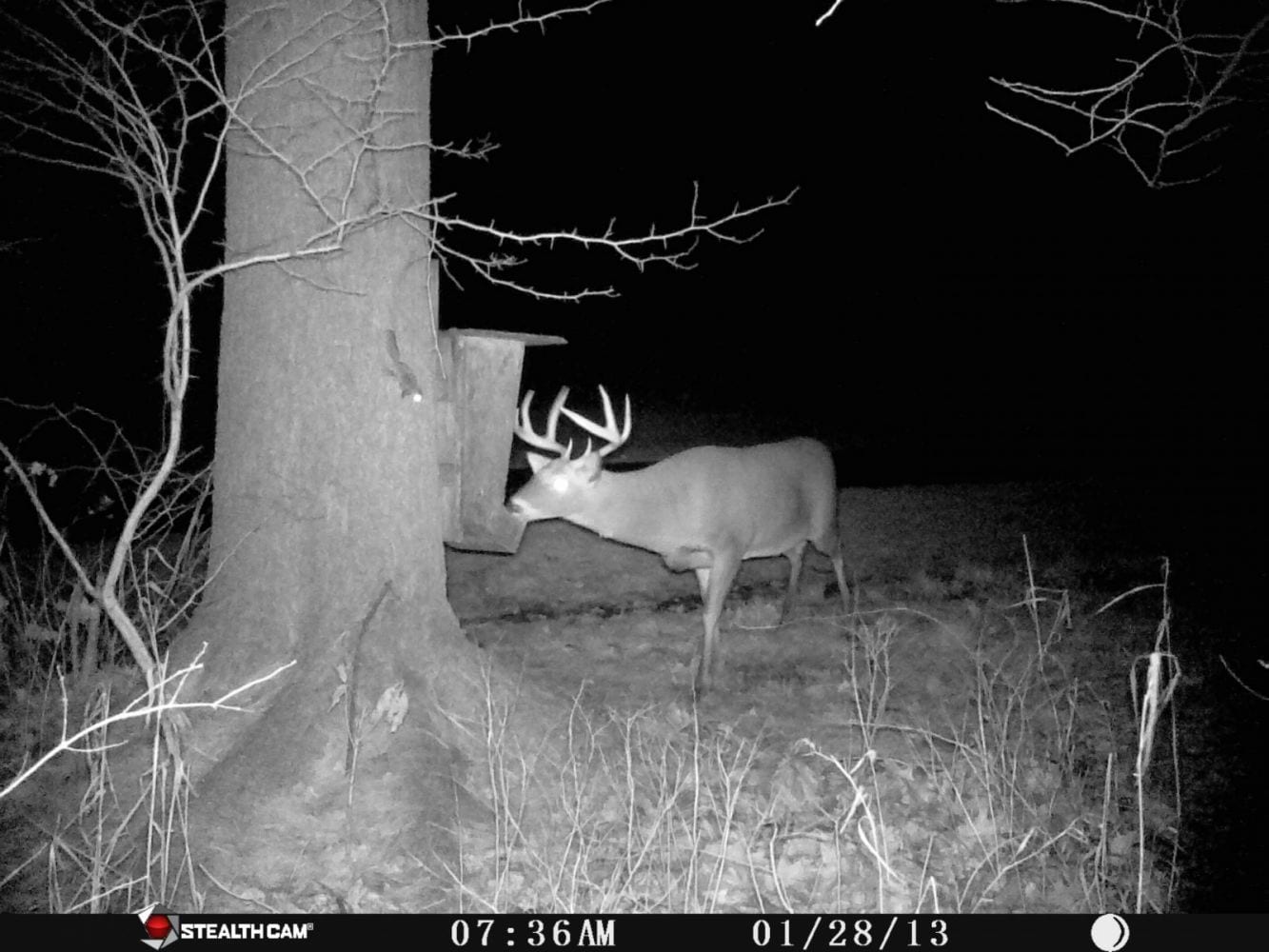 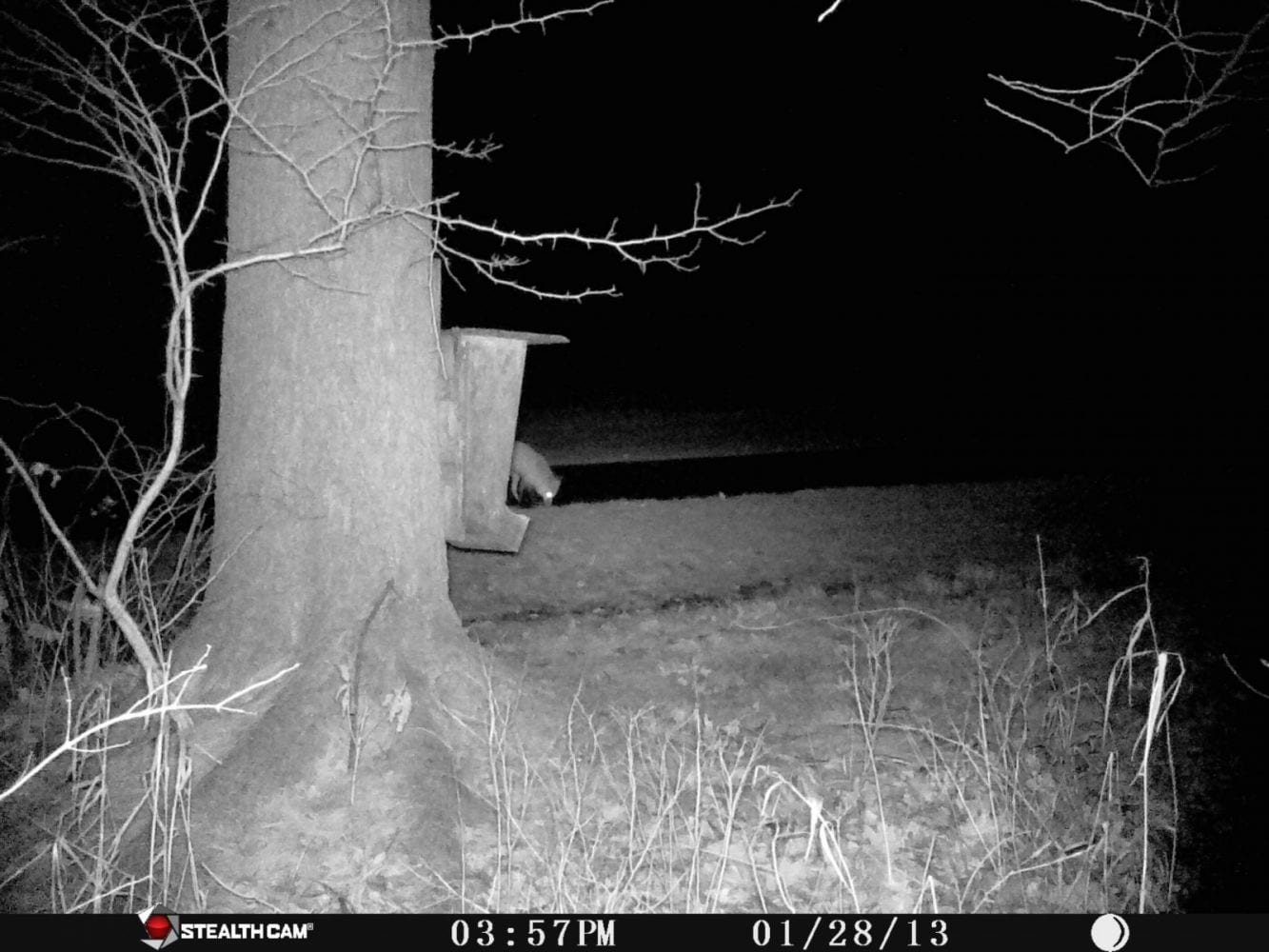