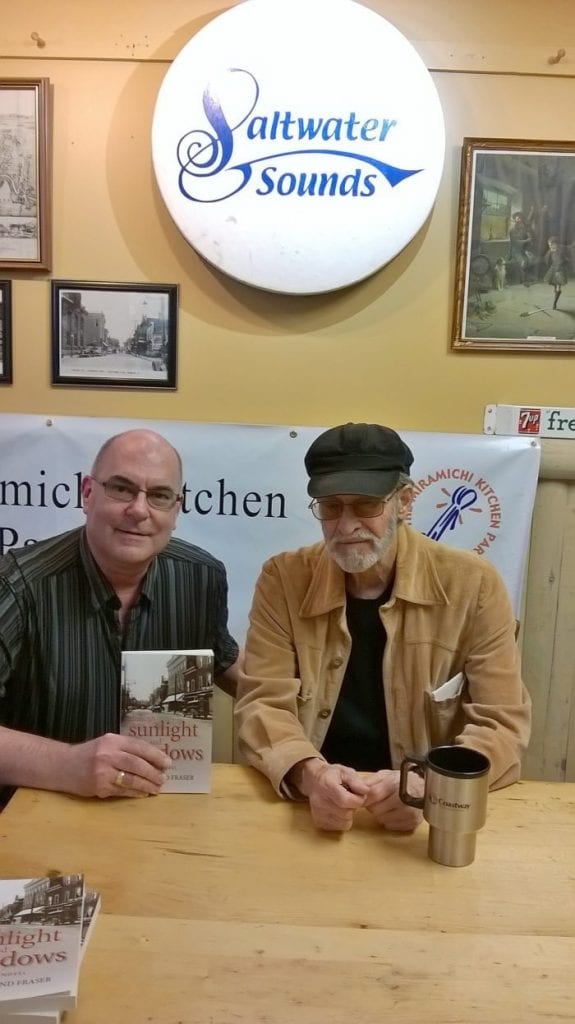 James M. Fisher and Raymond Fraser at the book launch for Through Sunlight and Shadows in 2018.

Sadly, Through Sunlight and Shadows would prove to be Raymond Fraser’s swan song, as he passed away just a few short months after its publication.

It is his fourteenth book of fiction and is an all-new volume of “memoirs” of his fictional/semi-autobiographical character, Walt Macbride.

While regular readers of Mr. Fraser’s will be familiar with Walt in all his manifestations, his youngest days growing up in Bannonbridge (an alias for Chatham, NB) are lesser-known.

Here, he begins at his earliest recollections:

“I really don’t know what age I was during the times of my earliest memories. I don’t know the age I was when I learned what age I was or when I did learn when it meant something to me other than a reply if someone asked me. I certainly had no notion early on of what a calendar constituted. All it was to me was a nice picture on the wall with mysterious markings beneath it.”

So you can see that Mr. Fraser starts his (Walt’s) recollections very early on.

While living in the town of Bannonbridge (“the greatest place in the world to grow up in”), his house had no running water, no plumbing and no central heating other than a wood stove.

The youngest of three, he had two older sisters.

They shared half of a house with the Flynn’s who had 10 children, so Walt was never short of friends and playmates.

Later on, Walt reflects on childhood vs. adulthood:

“A couple of years later, when I’d learned to read, I loved to lie abed on Saturday mornings and read the stack of comic books that I’d traded for with my friends. It was such a luxuriously happy thing to do….Saturday morning, no school, no getting up when I wanted to sleep in, nothing to do but lie in bed and immerse myself in one comic after another…. You just don’t get that depth of happiness as a grown-up. It’s a gift children have, pure joy with no price to pay. In my experience, adult happiness is invariably a prelude to some calamity or other.”

While Through Sunlight and Shadows is full of growing up in a simpler time and is full of boyhood antics like climbing on roofs, making tomahawks to fight a mock war with the kids over on Victoria Street, learning to skate with dull, centuries-old skates and so on, it certainly makes for some genuine and inner-directed reading, even if you grew up in a later time period, such as I did. When I read of Walt getting his first new bike (a tricycle), I can think back and vaguely recall my own trike and a seven-year-old Walt being given a new baseball by a college student was a real treat.

“I was so proud of that ball. I kept it for years and never once used it. I don’t know what I was saving it for, but I saved it. It was like getting a piece of the Holy Cross to me.”

Then I look at kids today who have expensive hockey sticks, baseball gloves, skates worth hundreds of dollars, snowmobiles, dirt bikes and four-wheelers, I wonder if they have missed out on something growing up.

Do they appreciate all they are given?

My family was considered middle-class in the sixties when I grew up.

I was given the basics, but I had to earn an allowance and learn to save up if I wanted something.

Or get an after-school job when I was older. I never learned to save, and I have more than I need, really. I’m at the stage of life when I need to downsize, but it’s so hard to let go of things.

They keep my memories alive.

Through Sunlight and Shadows makes for some genuine and inner-directed reading.

You can see how reflective Mr. Fraser has induced me to be. I’m sure all mature readers will appreciate Through Sunlight and Shadows.

It makes a nice companion for the memoirs of fellow Miramicher Wayne Curtis who grew up in a more rural setting in roughly the same time period.

Walt Macbride becomes a colourful character as he grows up and deals with school, girls, college, getting a job and battling his addiction to alcohol and trying to become a writer. They all make for good reading and knowing they are heavily based on Mr. Fraser’s actual life experiences, it makes them all the more valuable. 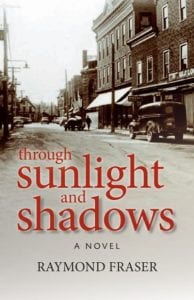