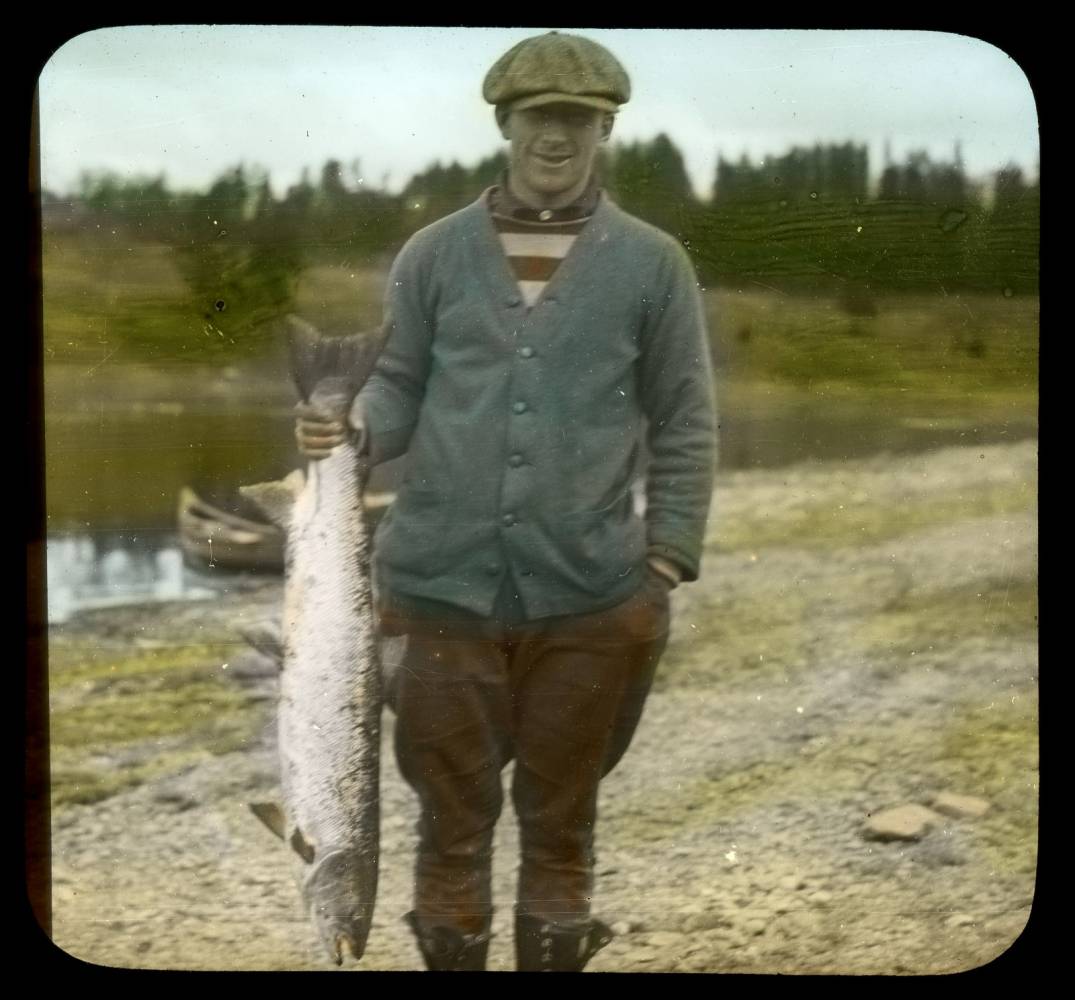 Young Charlie Wade with a well-mended Cains River kelt circa 1920. I believe this picture was taken near Black Brook at the mouth of the Cains River. Kelt fishing regularly continued until the end of May in those years, and the kelts mingled with early arriving bright fish. These fish were harvested and eaten.

Last of the kelts and early brights – Looking back at last year’s blog I see that I called this time of the season  “the tipping point” and in fact it is.  Most of the kelts are gone from the river now, though there are still some, and as I reported earlier it wasn’t a bad season all things considered.  Country Haven reported releasing over 1,000 spring salmon this year – which is well over 2018 – and as recently as a week ago Byron and Tyler Coughlin had a number of guests casting for salmon in water that was both warmer and much shallower than at the beginning of the season.  One man came all the way from England to fish. 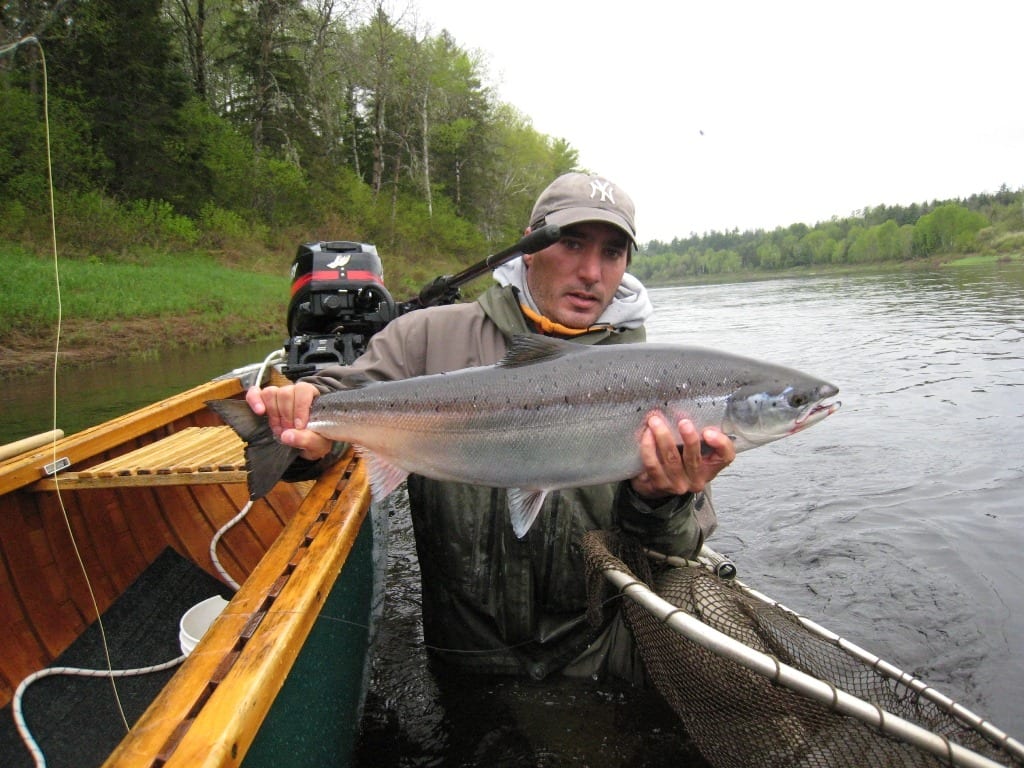 Jason Curtis holds a bright salmon caught from the Keenan’s Pool in late May of 2011. That year there were a lot of early run fish.

While the kelts are gone, the bright fish aren’t really here yet, at least in numbers abundant enough to seriously fish for. It is entirely conceivable, though, that the first will be caught this week.  In 2010, 2011, 2012 there were May salmon caught at Campbell’s Pool, but we haven’t gotten one since.  The amount of anglers trying, though, has been highly variable year to year.  I fished in Russia during late May in each of the last two years, so I didn’t try the early fishing on the Miramichi myself.  Not many other people did either, and that is probably the greatest reason that more catches weren’t reported.

The timing of the run – and possible reasons for it – is always an interesting point of discussion. It seems to me that the last few Junes have quite consistently had decent fishing.  In my time on the river, June – except for perhaps the last week of that month – has very seldom offered gangbuster fishing.  The quality of the fish that are caught is the best of the season, and there are frequently some real monsters in the mix.  I remember Junes though, during the early 2000s when we hardly saw a single fish.  In fact during 2009, which was quite a good year overall, we neither saw nor caught a salmon at Campbell’s until the 4th of July.  We already know that the late fall run has become much more dominant in the last few years.  Relatively speaking perhaps the very early run is too, with the fish avoiding running the river during the warmer period of mid-summer.  It would sure make sense. 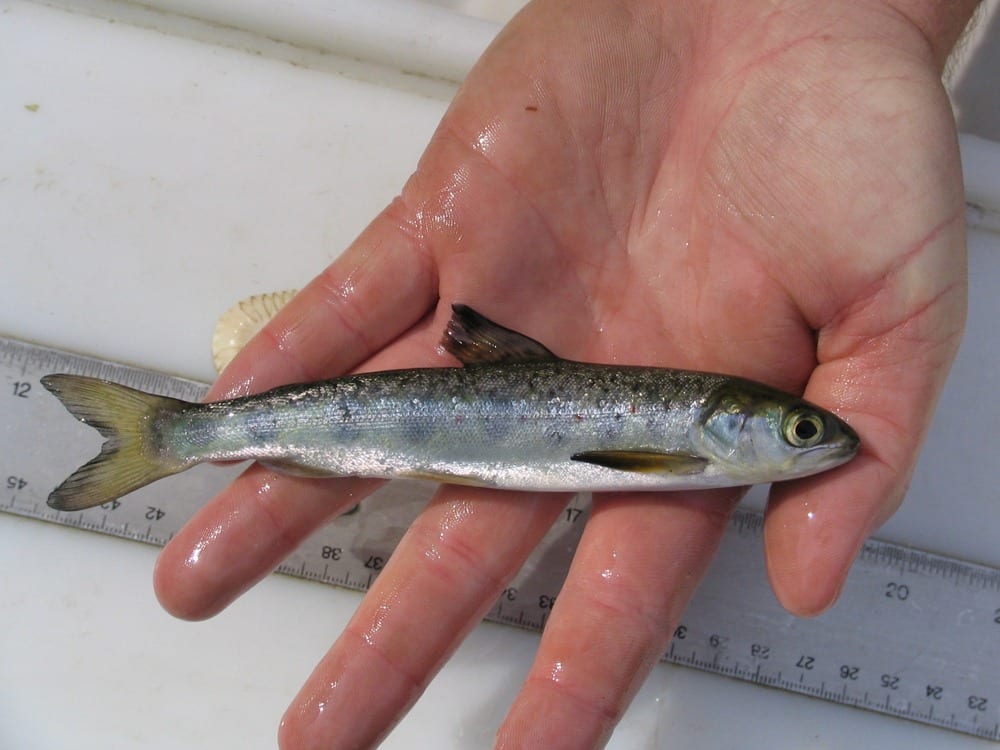 CAST Program, Atlantic Salmon Science Update – David Roth sent me a note about exciting progress on the CAST Experimental River. For a full explanation of the Experimental River scroll back to my January 16, 2019 blog.  In short, though, CAST partners which include the Miramichi Salmon Association, The University of New Brunswick, J. D. Irving, and Cooke Aquaculture have collected a small number of wild smolts each year from the NW Miramichi and grown them to adults in the Miramichi Salmon Association hatchery.  Upon maturity a limited number of these salmon, both males and females have then been released during the fall into the experimental river to spawn on their own.  All the indications so far for the success of this program have been very positive.  Here is David Roth’s note:

There is good news from the experimental stream. The genetic results from the fry that we sampled in the summer of 2018 proved that the 40 SAS individuals released in the autumn of 2017 have successfully spawned and produced viable progeny. There was also a noteworthy amount of wild precocious parr that contributed to the spawning. Hence we have two different cross groups currently swimming in the river: SAS(female)xSAS(male) and SAS(female)xWild(male).

110 of the sampled individual were equipped with 12mm PIT tags. During the upcoming field season, we will monitor the habitat use and the growth rate of these fish via the use of mobile PIT tracking and recaptures.

The next big step on the list is to conduct a survey to control the success rate of the 40 SAS and 40 Wild individuals from the release in the autumn of 2018. We will again take genetic samples to verify the parentage of the 0+ salmon found in the experimental river. Later in the season when the 0+ individuals have reached the minimum size of 50mm we will conduct a quantitative electrofishing survey and equip as many juveniles as possible with 12mm tags. Again this will allow us to identify each individual in future surveys and hopefully, we will be able to register the outmigration of many of these marked individuals as smolts.”

I would only add to David’s comments that we are not talking about stocked salmon here. All the spawning that took place in the Experimental River was natural with fish of 100% wild origin selecting their own mates and building their own redds etc. 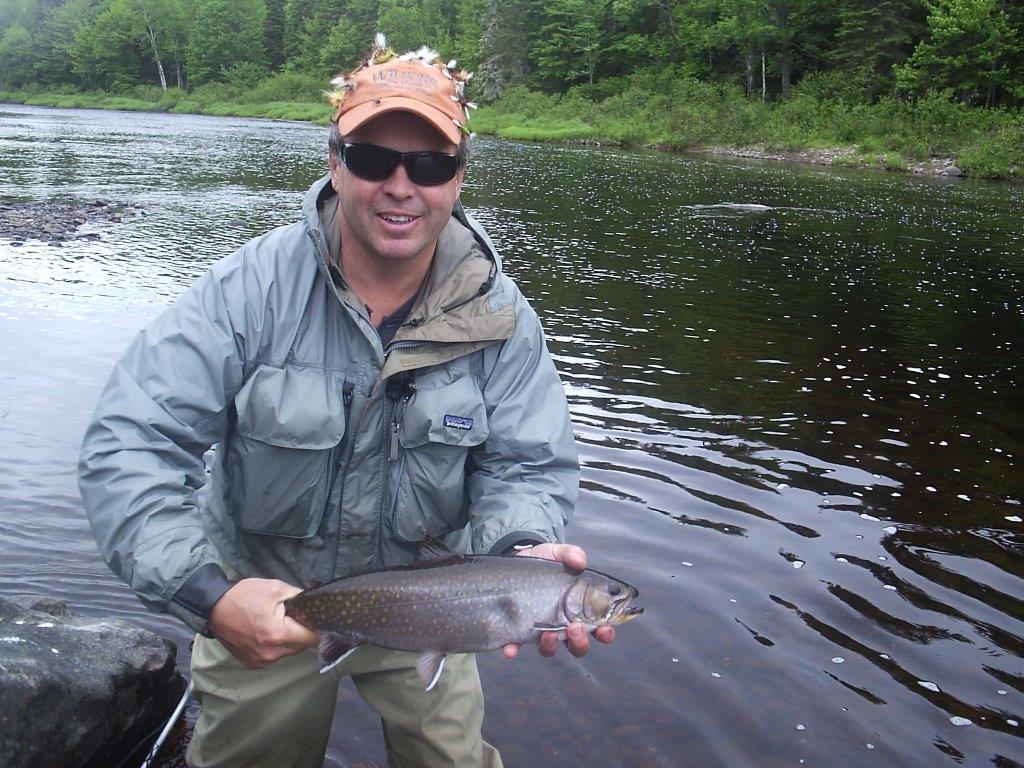 Time for brook trout – The accepted time for the height of the sea run brook trout fishing is the last week of May and first week of June.   Like everything else, though, there can be a lot of variation in that schedule.  Regardless of the timing of the sea run brook trout run, there are non-sea run brookies all up and down the Miramichi and Cains River.  While the individuals that stay in the river aren’t as large as the sea runs, some of them are quite substantial fish in their own right.  During the research for my new book On the Cains – Wilson’s famous guide Ernest Long told me that when he was a young man there were brookies up to four pounds taken early on the upper Cains each season that had the coloration of non-sea run trout.  I’ve not caught any that large, but we have caught them up to 16 or 17 inches on the Cains during both spring and fall fishing. A brook trout of that size on a 5 or 6-weight rod makes me smile all day long. 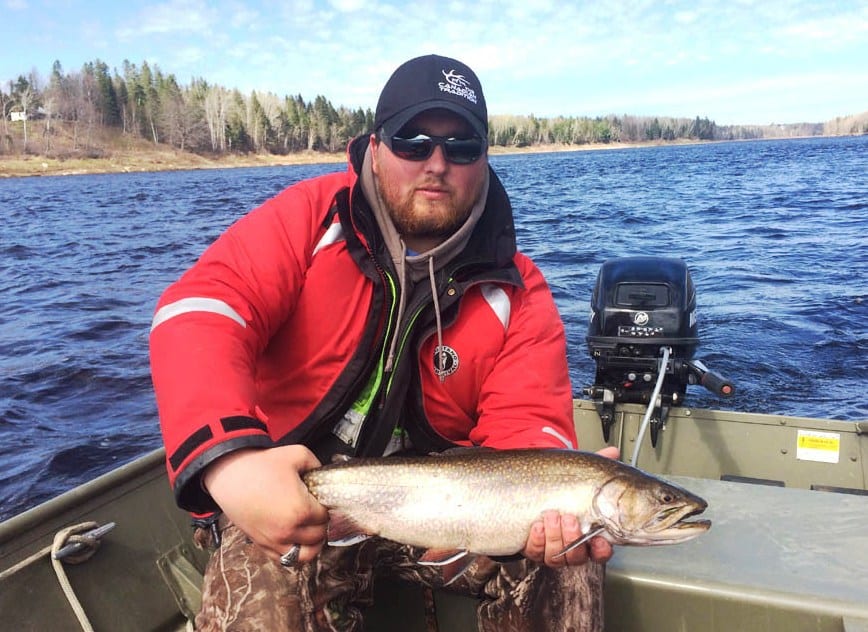 Country Haven’s Tyler Coughlin about to release a large brookie caught in the lower SW Miramichi during the spring salmon fishery.

The SWM around Quarryville often yields some large, sea-run brookies to spring salmon fishermen. Because there just aren’t all that many of these superb specimens, and because they are so important as spawners, all of these fish should be released.  Darrell Warren, who has a lifetime of spring guiding in that area, says that this was not a great spring for the big brookies, but that a fair number were still caught there early in the spring fishing.  Additionally, I saw a Facebook post from Howard Brown who was fishing at Country Haven last week.  He did well on salmon but also said that he landed 6 nice sea run brookies.  That’s some good news!

Striped bass –  Stripers present another opportunity to catch game fish on the Miramichi before the bright salmon arrive.  I’m hearing that so far this year very few stripers are up in the Miramichi on the spawning grounds, assumedly due to the cold spring.  I’m a little surprised by this since we are having good fishing where I live in Maine on stripers even though when I came across Portland harbor the other day the water was only 47 degrees F.   The bass down here seem to be willing to move through that colder water to get into the rivers where it is warmer and there is more food.  According to some reports, though, fishing on the Miramichi has been quite good further down in the estuary, and those fish should soon be moving upriver.  With a little luck perhaps they’ll wait long enough for the Atlantic salmon smolts to get by them.

Odds and Ends – I’d like to thank the generous winners/donors behind our on-line-auction of some artwork from On the Cains, guided fishing at Doctor’s Island and Wilson’s, and the Bill Utley tied collection of Cains River Streamers placed in a shadow box hand-made by Gary Tanner.  We raised over $5,000 USD for the Miramichi Salmon Association.  I’m planning to expand this auction next year.  If any of my readers have goods or services that they would like to donate please contact me at . 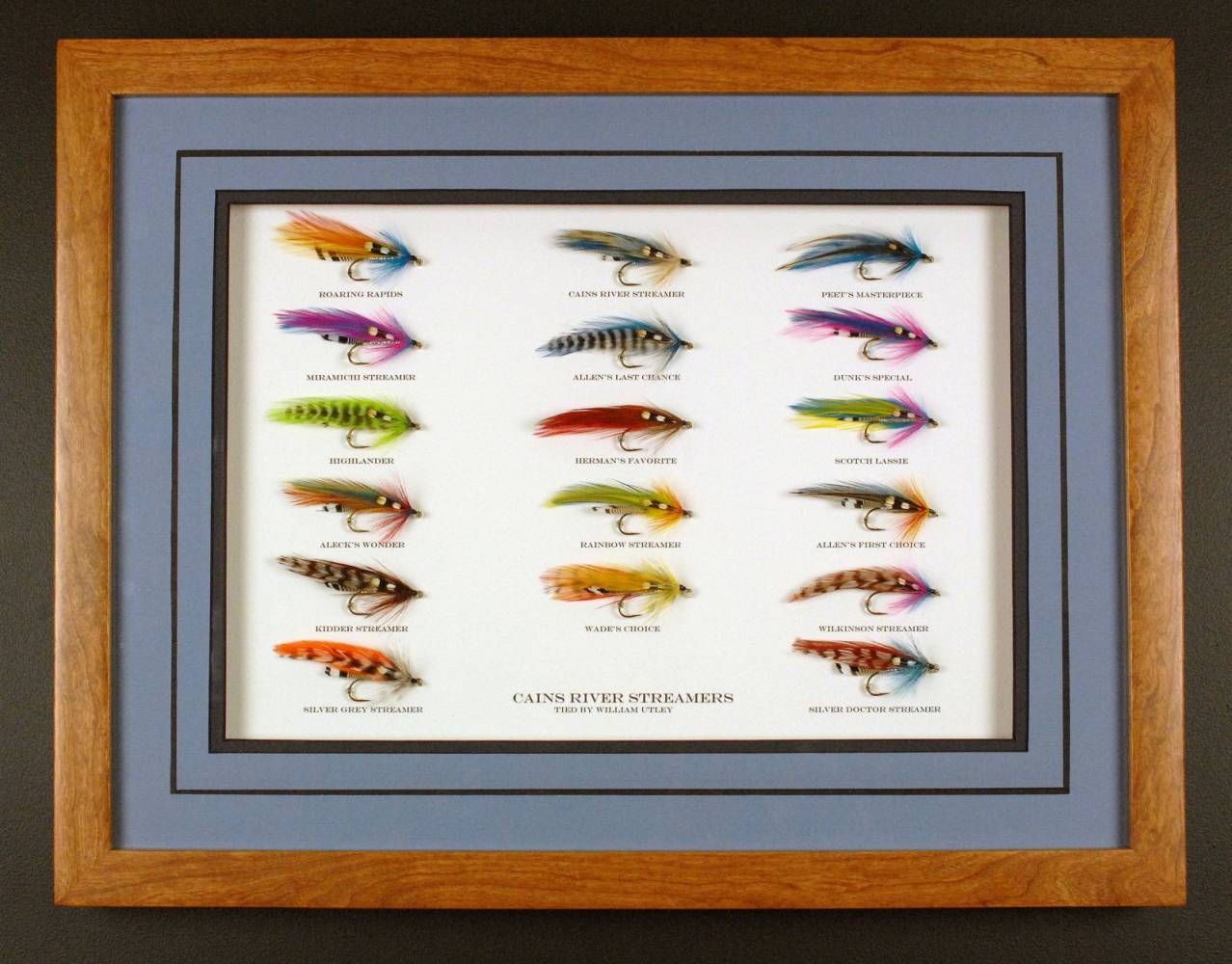 Cains River streamers tied by Bill Utley in shadow box by Gary Tanner. Sold at auction for a generous donation to the MSA.