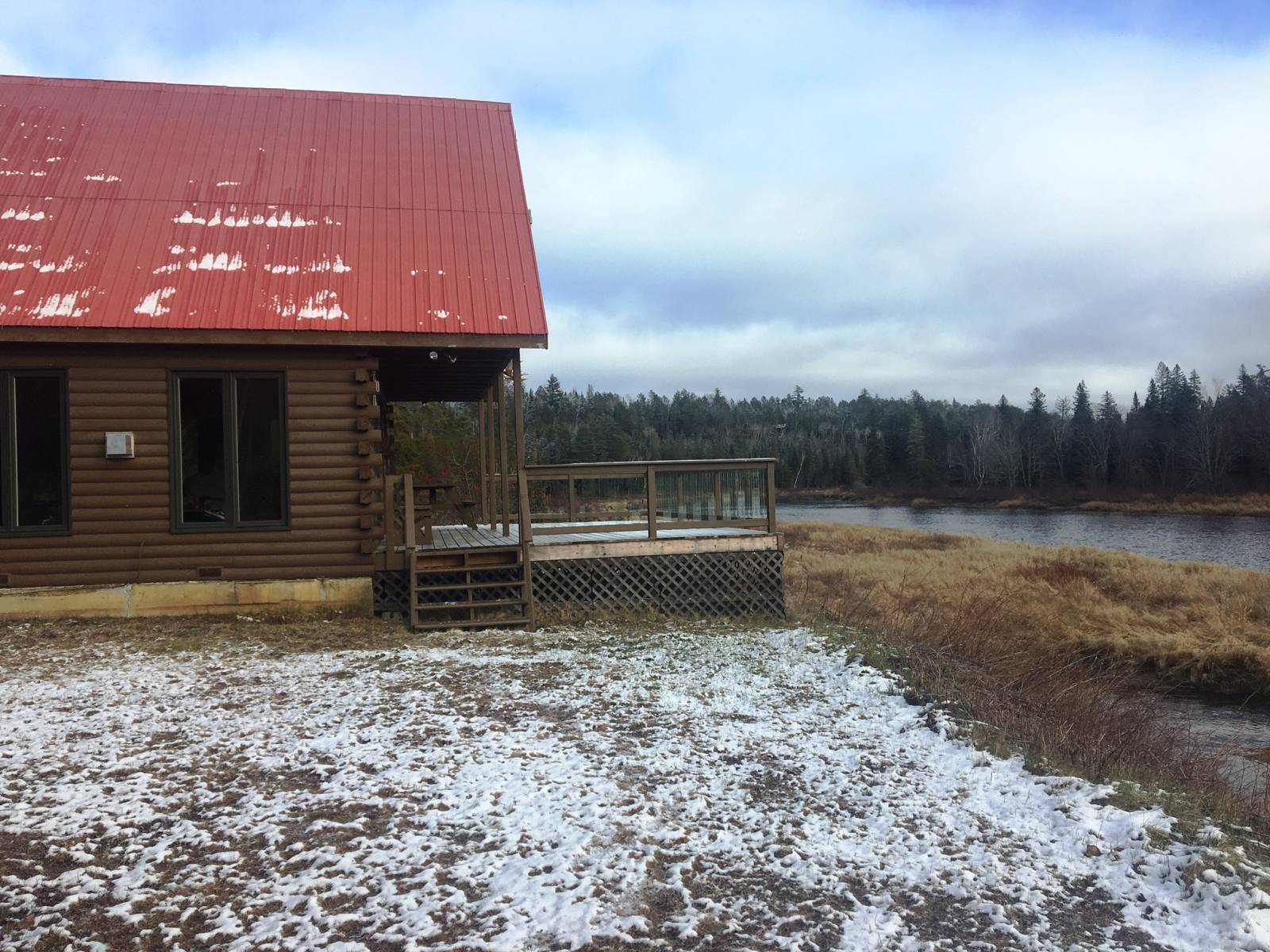 The activity, including the just plain chatter, that normally accompanies Miramichi fall salmon fishing was the quietest during 2020 that I can remember.  Certainly a lot of that has to do with Covid and the lack of non-resident anglers.  Normally the fly shops in Doaktown and Blackville are buzzing with people that you see every fall, as well as new faces on the river.  I wasn’t there to see for myself, but from all reports it was very quiet.  Even the fall rains were small and uneventful, barely enough to provide good spawning access to the tributaries.  The fish were there, though, and all the lodges reported excellent fishing towards the end of the season.  According to Jason Curtis – who knows what he is looking at, and has a ringside seat to witness salmon moving up the SW Miramichi – salmon continued to enter the river strongly for a week or so after the season closed. 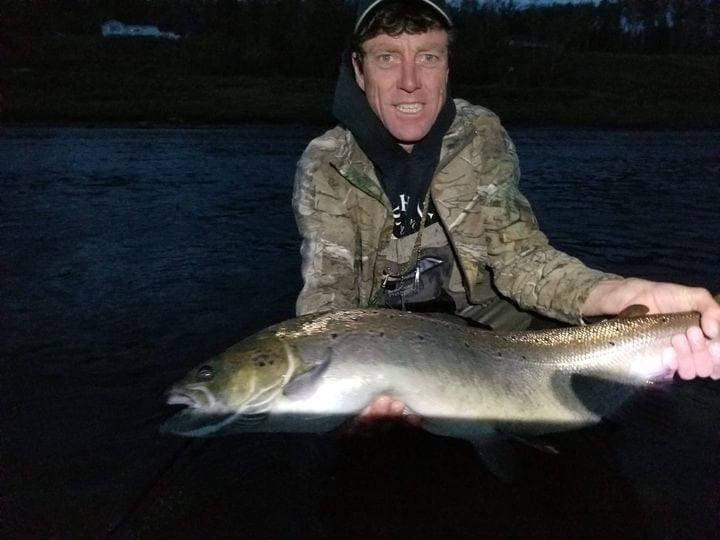 As Country Haven guide Jeremy Vickers knows, the 2020 Miramichi season had its share of monsters.

A short while ago I received an e-mail from Eddie Colford, head guide at the Black Brook Salmon Club.  Here’s exactly what Eddie had to say:  September and October were really good fishing, and the late raise in the water was good to put the fish up the Cains. The last couple weeks of the season we were getting a lot of male Cains grilse. To me the fish run was good this year. Just hoping to get things back to normal next year. There also was some big Salmon, Alex my son landed one at 34 and a lot of other fishermen who had the water rented never seen the like of the big fish.

I would add to Eddie’s comments that the catch at Campbell’s this year, while less than half of a normal year due to the lack of fishermen, was comprised of 69% grilse whereas the average for the previous 5 years had been only 62%.  While anything but conclusive evidence, I take this, along with the evidence of our catches and observations, as an indication that the grilse numbers were improved in 2020.  All of the positive reports from 2020 have motivated me to book two spring salmon trips to the Miramichi for late April 2021 rather my normal single trip.  I think spring fishing will be quite popular this coming spring, so now is the time to call one of the outfitters and book some time.  Country Haven, Upper Oxbow, The Ledges, and Wilson’s – that I know of – are all good spring fishing outfitters. 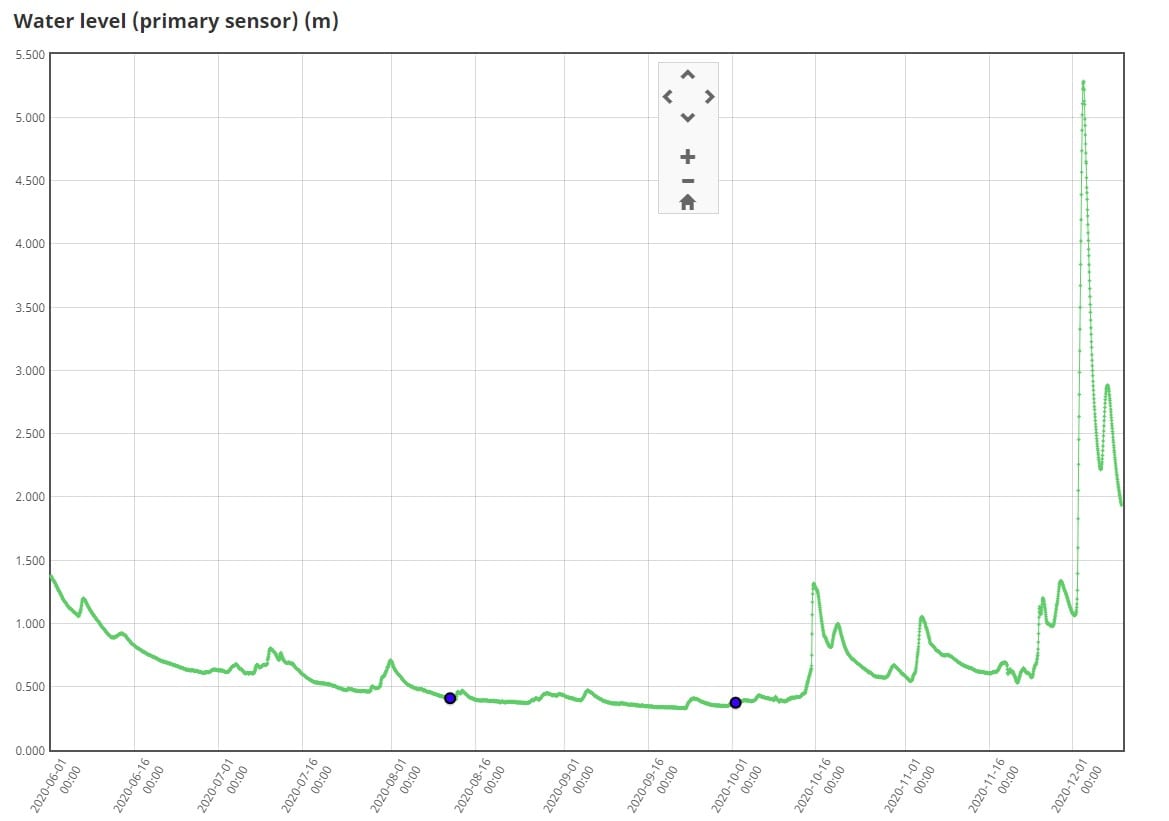 This year’s ultra-low water is essentially unparalleled, with levels continuously below .5 meters from 7/15 to 10/15.

The record low water all came to an end with a good rain on October 15, and then a very big rain on December 1st.  The river had settled down to a worrisome spawning height of only .5 between these events, but the second rain averaged around 100mm or 4 inches over much of the valley.  A lot of folks connected with the river feared that the already wet ground would send the Miramichi out of its banks, but thankfully it didn’t happen.  Largely, I believe, we were spared because the headwaters areas received less rain than the Cains valley and the lower Miramichi River.  They still had a big rain in the headwaters, but more like 60mm or a bit over 2 inches – half of the lower river.  The water rose to 5.3 meters, well shy of the 6.5 meters or more needed to head over the banks at Campbell’s Pool and to flood the interval, as it has in a number of recent years.  It was stunning how rapidly the river rose from around 1 meter to 5.3.  It hardly took 24 hours to come up roughly 14 feet!  And, it went down very rapidly also.  I’m not an expert, but I suppose this is evidence of the clear cutting throughout the watershed.  It does seem like these raises run off much faster than they used to even in my relatively brief time on the river. 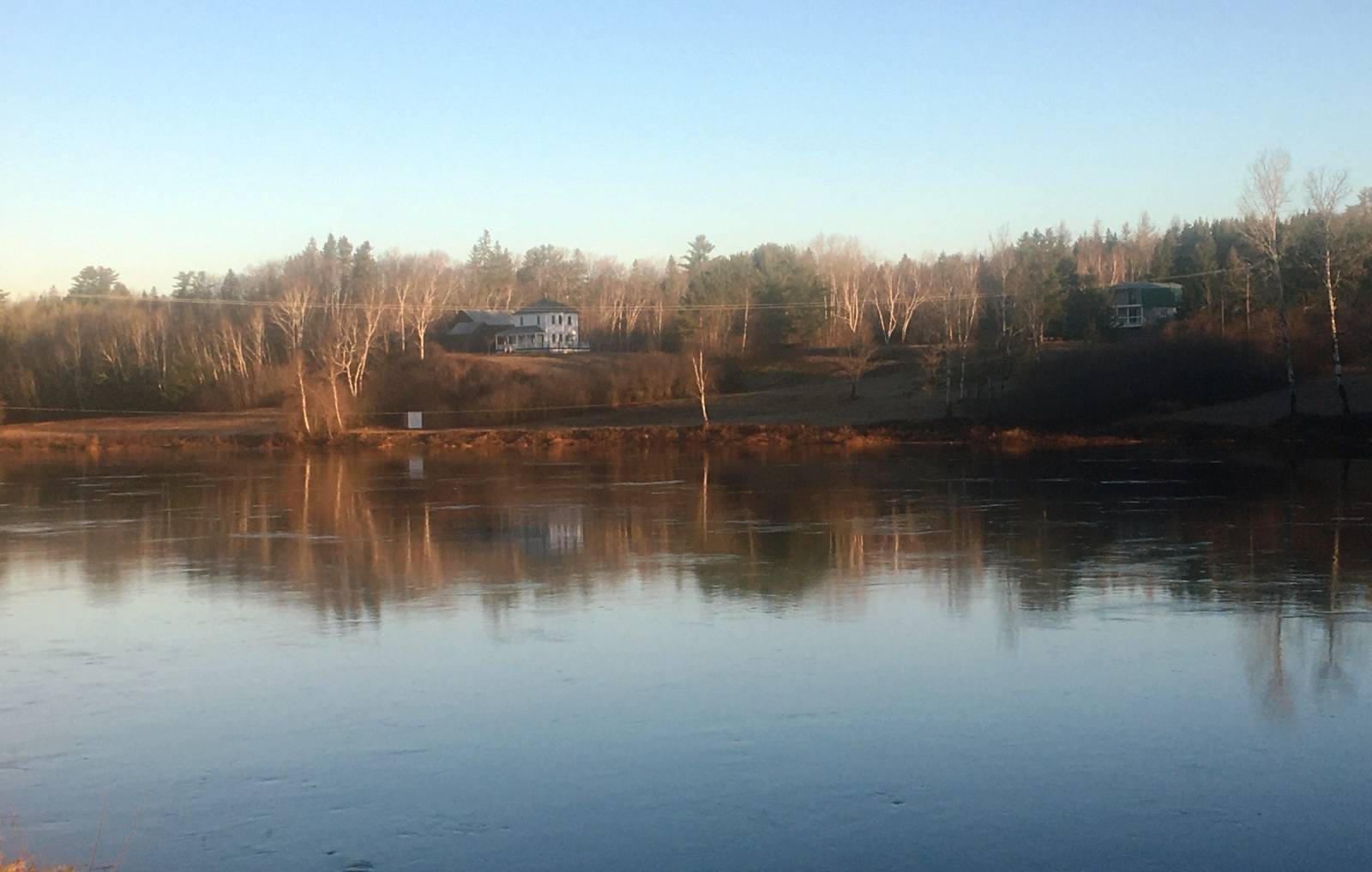 A big raise, but in several recent years we have seen water over the top of the bank at Campbell’s. The water has been a couple of feet up the sides of that little white shed.

We had a decent run of both large salmon and grilse in 2020, and we will hope that they worked their magic on the spawning grounds, and that conditions will allow for strong numbers of fry next spring.  Also, let us hope that whatever happened in the ocean during the winter of 2019/2020 will again happen this winter, and that next summer’s run will be another step in the right direction.

Miramichi USA Salmon Celebration 2021 “Save the Date” – Rip Cunningham, Gary Tanner, Ralph Vitale, David Fenderson, Butch Dalton from Canada, and myself have been hard at work on putting together an event that you won’t want to miss.  First, there will be an auction with lots of great items and fishing up for bids.  This will run from noon on Sunday Feb 14th to 5:00 PM Sunday Feb 28th.  You’ll be able to register before and during the auction.

The most exciting news is that a special Celebration event will take place at 7:00 PM on Saturday night Feb 20.   This will be a Zoom/Webinar event that will feature presentations by some of the top names in Atlantic Salmon fishing.  Background for the event will be movies and photographs – both modern and historical – of Miramichi scenes, people, and fishing.  Here are some of the presentations that you will see: 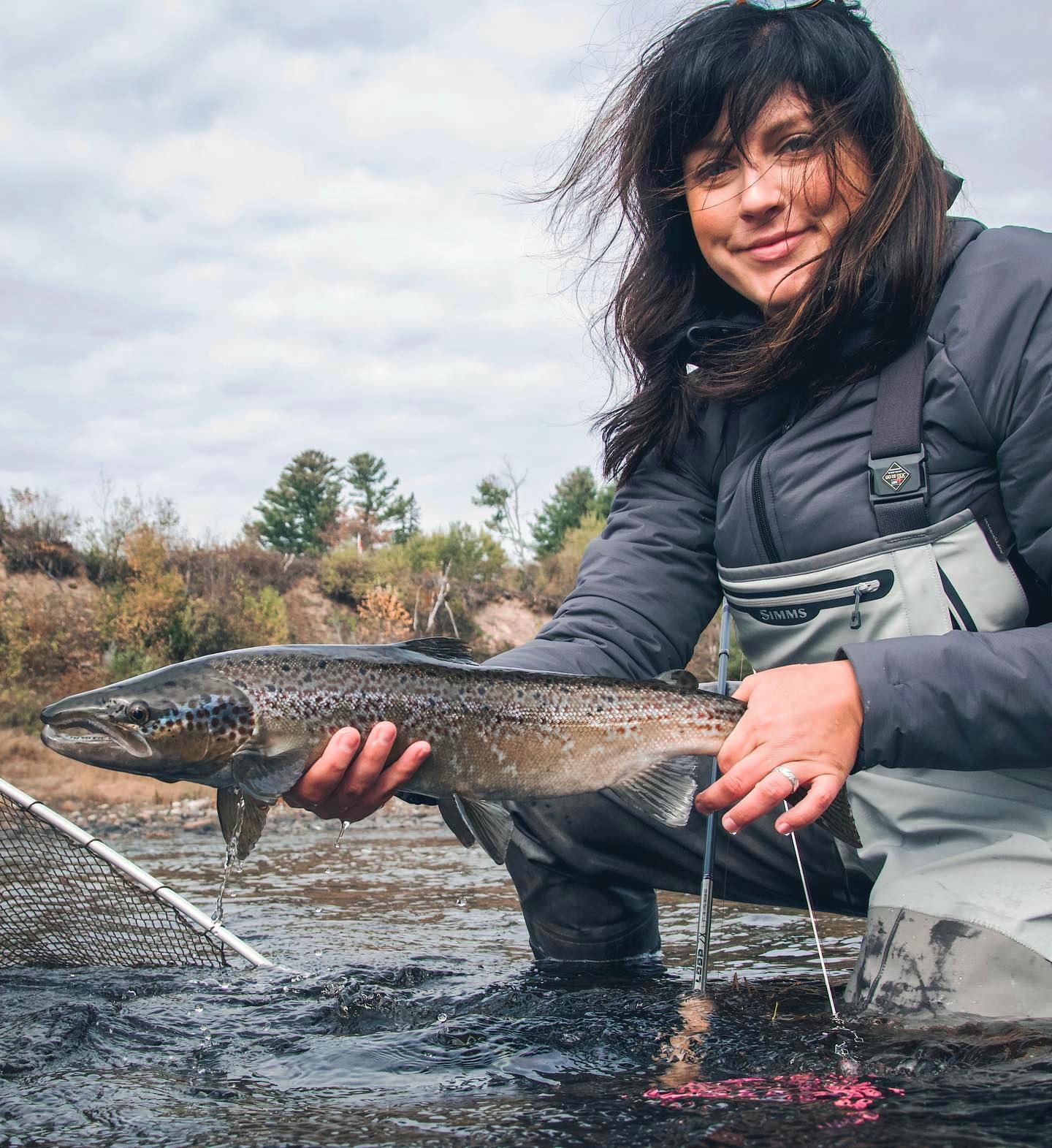 Deirdre Green with a nice Miramichi grilse from the 2020 fall run.

There will be no charge to view the Miramichi Salmon Celebration, though donations are gladly received.  All donations over $50 will enter the donor into a raffle for a Luther Hall original painting being designed right now for the event.

It’s Christmas – Signed copies of On the Cains: Atlantic Salmon and Sea Run Brook Trout on the Miramichi’s Greatest Tributary can be purchased from my website at this link.  There is also a combination special with a copy of Closing the Season available for half price if purchased along with On the Cains that is available from the menu at the top of the website page.