We are into the heart of the Dog Days of August, but fortunately for the fish, most rivers are on the high side giving a buffer to warm days.  Cooler nights in the past few days are also keeping conditons very much on the positive side.  As soon as the water drops off, probably by the weekend, this is prime Carter’s Bug time.  Let’s hope Irene doesn’t drop a flood upon us and ruin the fishing for the better part of a week.

Both Cassilis and Millerton Trapnets reported few fish with both averaging one, maybe two salmon a day and two to three grilse, so there is no fall run to report yet.  However, these numbers are about typical for the time of year.

W. W. Doak and Sons in Doaktown said angling was much better than expected for the middle to late August.  Catching reports were good enough to keep anglers interested in going to the river.  One camp reported hooking 12 fish while landing 10. The fish were generally old fish that had been in the system a while and were moving around as the water had come up between one to two feet on Tuesday. 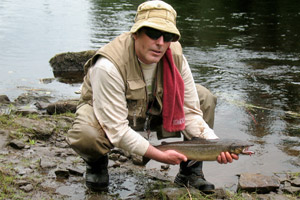 Jamie Metlin was on the Cains Monday Morning and hooked into this 22" male grilse hooked with an Alley's Shrimp.

Flies of choice were Bombers along with wets such as Same Thing Murrays (most requested), and some bugs such as White-tailed Green Machines and even a few Undertakers and the odd butterfly.

Derek Munn of Ledges Inn in Doaktown and Mountain Channel in the Rapids area said they had received a two-foot raise of water on Monday into Tuesday.  They were getting decent catch result having with five rods hooking seven fish and landing four.  On Tuesday, they hooked nine and landed five.  All were old fish with two being salmon and all the rest grilse.  The raise in water had the fish moving and more active than normal for August.

Flies of choice were Brown & Orange Bombers along with wets such as Same Thing Murrays, and White-tailed Green Machines on no. 6 hooks.

Herb Barry Sr. of Herb’s Fly Shop on the Station Road in Blackville said the water there had raised at least a foot by Tuesday afternoon, and anglers were not catching fish.  They were seeing old fish that had been laying around.  Although angling was generally poor, he said it was still nice to be on the river.

Curtis Miramichi River Outfitting in Blackville said the river was high and dirty on Tuesday, so anglers were just waiting for the water to drop.  A few anglers were getting fish in some high-water pools.  There were lots of fish showing, but very few takers.  Canoeing conditions were great.  When I called the shop, Brock was being interviewed by film crew from “Hooking With Mariko Izumi”.

Flies of choice were Bombers and in the wets, White-tailed Green Machines, Shady Ladies and Glitter Bears.

George Routledge of George’s Fly Shop at the Mouth of Renous in Quarryville said angling was very slow, but the water was high and in great shape for the fish.  There were lots of old fish around, but they were not very interested in taking a fly.

Flies of choice were White-tailed Green Machines, Grenn Machines, Shady Ladies and a variety of Fall patterns as anglers were trying anything.

Jim Laws of Miramichi Hunting and Fishing in Newcastle, Miramichi reported angling as slow with lots of water through out the system. What fish were being hooked and seen were old, with few fresh fish around.  Most anglers were in pause mode, waiting for the fall runs to start.

Syd Matchett of Trout Brook Fly Shop on the Northwest Miramichi said there have been some fish hooked and seen this past week, but there are not a lot of anglers out.  The Sevogle and Northwest were both high on Tuesday as there was a lot of rain in the headwaters.  The water itself was great for the fish.

Flies of choice were White-tailed Green Machines on nos. 4 & 6 hooks.

Debbie Norton of Upper Oxbow Outdoor Adventures on the Little Southwest Miramichi said they had decent fishing last week.  Ben Giffin (ASF’s Geoff’s son) hooked his first salmon ever and Oh so close to landing it.  This was on a rod that he and his dad had built together last winter.  Paul Elson landed a grilse on Friday and his son Paul Jr.  hooked two salmon and two grilse in Saturday.  Debbie’s brother (and fine guide I might add) Fred landed a 15 pound salmon on Monday.  Then the water came up putting angling on hold for a day or two.

Flies of choice were White-tailed Green Machines and Will Taylor Specials.

As the weekend approaches, we hope the rivers will have dropped to comfortably fishable levels, and hopefully we can get some angling done in case Irene dumps a truck-load of water on us.  So get out and “on the water”.

Thought for the Week: “There is no greater fan of fly fishing than the worm.”  Patrick McManus

HUMOUR: Two fellows are out fishing on the lake.  A hearse and funeral procession passed the boat on a nearby road.  One of the fellows stands up and holds his fishing hat over his heart as the hearse passes.  His buddy comments, ‘Gee Harry, that was really nice and respectful.’  Harry replies, ‘Well after all, we were married for 40 years.’ Anon.

Hi Doug;
I’m currently enjoying a birthday gift from my two daughters, Nathalie and Christine, something called Salmon Country.  Being a voracious reader, I know I could get through it in one or two sittings, however I prefer to sift through it and savour the stories, the pictures as well as the ambiance. As with a good cast of my fly, I enjoy every ripple, gurgle and every page is like a take from our source of mutual admiration, Salmo Salar.

What’s so interesting for me is that I have crossed paths with several of the actors in this engulfing piece of art, including yourself. You may not remember me but I was at STU at the same time as you were.  I was with the class of ’71. I met Jacques in Dieppe and again at Quarryville while fishing with my son-in-law, Luc Carrier. I’ve been to Luc Gagné’s shop on several occasions and have heard of André’s work as a photographer.  He went to school with my girlfriend.

I met Debbie Norton while on a fishing trip to Upper Oxbow with my son-in-law.  I also recognized Father George Fournier on page 118.  Although in his 80′s, he still likes to get out and cast a line.  He’s sitting at the front of the canoe, sporting that ever-present smile of his.  He always likes to take time to stop and chat about fishing whenever we meet.  Great reading!

I’ve been on the Restigouche a few times this summer and have had some really interesting action, especially our first evening at Red Bank on the 3rd of August.  My brother landed two grilse while I landed one.  I played a good-sized salmon for quite a while before it decided to practice its long distance release technique.  I also lost three more grilse on that same night.

Both my brother and I were really pumped up after that outing.  Our two partners, who were fishing farther downstream, did not fare so well on that first night, however they more than made up for it later during our trip.  I’m planning another outing next week, possibly my last for this year as I have to get ready for Moose season.  I’ll be acting as guest hunter to my brother, also a STU grad (Class of ’74).

Now, I have to get back to Salmon Country and get myself worked up for my next sortie. Talk to you later and of course…Tight Lines to ya! 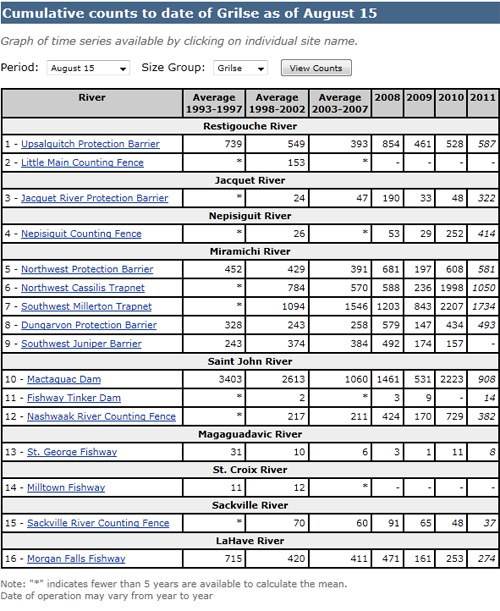 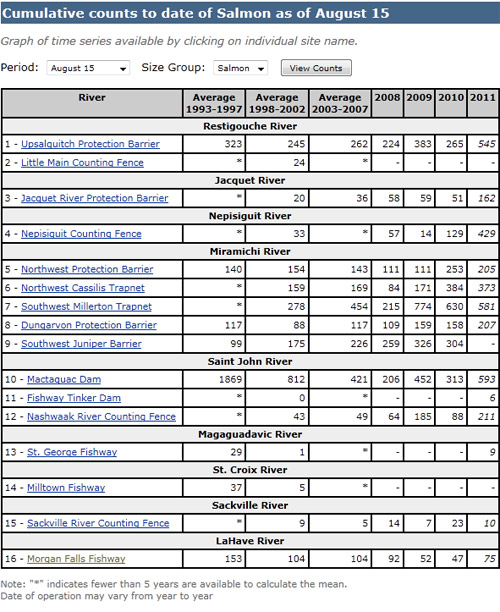 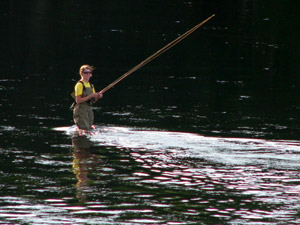 Until next week…
TIGHT LINES,
DOUG