As we close September and open October, we have moved into the “Cast ‘n Blast” season as Bird season opened October 1.  On the down side, this is the last month for angling this season.

Now for a bit more on the good-bad line that characterizes many jokes.  The good news is that there are great numbers of fish in the system.  The bad: They don’t want to take a fly. 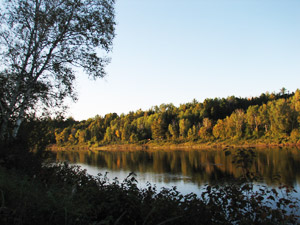 The counting fences are reporting a somewhat quiet group of numbers.  The Northwest trapnet at Cassilis is averaging less than six fish daily, while Millerton on the Main Southwest Miramichi has had a pendulum swing to it this past week.  Last Wednesday to Friday it had an average of 20 grilse and seven salmon.  On Sunday it had a total of four grilse, and continues to Wednesday with less than 10 totals.

These results fuel the questions on most anglers’ minds:  Where is the Fall Run, or has it already come?  Mark Hambrook who manages the MSA hatchery in Miramichi offered an overview that is worth considering.  He noted that last year there was a change in terms of the Fall Run.  Normally, the Fall Run would arrive as its name suggests, in the Fall.  This would include 60-75% of the big spawners.

Last year (and now this is shaping up to look the same) the Fall run came early.  About 2/3 to ¾ of the run came earlier in the season.  Last year was a dry season.  This year has been a wet one with lots of high water and no Fall Run yet, although over all numbers have been great.  Does that mean that the run has already come in?  The only plausible answer is the fish know best and we will have to wait to see what finally happens and as to whether this earlier arrival will be the trend of the future.  Anyway, this is something to chew the fat on.

Hambrook and staff are into full brood stock collection and he’s noted that there are very good numbers of fish in the system, but not many new fish.  He also noted that work at whittling down the numbers of Large-mouthed Bass in Miramichi Lake is continuing.  AS well, he said that are some Stripped Bass starting into the system where they will spend the winter.

W. W. Doak and Sons in Doaktown said over all, angling was a bit slower this week, although depending where you were, some were having luck and limiting out while others had to work hard for one.  The good part was that there was no shortage of fish, and anglers were seeing lots, if not catching them.  Water conditions generally were close to perfect.  Most of the fish being hooked were older fish.

Flies of choice were small Ally’s Shrimps on nos. 6 and 8 hooks. As well as some smaller darker flies such as Glitter Bears, Undertakers and White-tailed Green Machines.

Derek Munn of Ledges Inn in Doaktown and Mountain Channel in the Rapids area said he felt there was a slight improvement in angling.  They had good results Tuesday with 12 fish hooked and three or four lost.  Wednesday however, produced only two grilse in the morning.  There were good numbers of fish around, but they were not taking well.  Water conditions were good, although a very small raise would help.

Flies of choice were Blue Bombers and Christmas Trees.

Herb Barry Sr. of Herb’s Fly Shop on the Station Road in Blackville said there were lots of fish around, but they were not good takers.  He had caught a couple of grilse, one dark and one fresh.  Fish seemed to be on the move and water conditions were good.  A good mix of salmon and grilse were being seen, if not caught.

Flies of choice were Ally’s Shrimps as the first choice, along with Red Squirrel Tails with orange butts, L.T. Specials, and General Practitioners.

Curtis Miramichi River Outfitting in Blackville said there were lots of fish, but they were not in a taking mood.  They were hearing of 7 to 9 a day between 20 anglers on average.  Water conditions were good, but maybe just a little high.  Canoeing is good especially with the Fall colours starting to hit stride.

Flies of choice were mostly summer patterns such as Bear Hairs, White-tailed Green Machines, Undertakers and Copper Killers on nos. 6, 8 and 10 hooks.

George Routledge of George’s Fly Shop at the Mouth of Renous in Quarryville said there were lots of fish in the river, but they had lock-jaw.  They were rolling and jumping, especially for small flies such as no. 10s, but at the same time anglers were most often feeling the pull and the fish were gone.  Those using bigger flies were not having as much action in that way, but were most likely to have the fish stay on if hooked.  He felt most of the fish were hook-bills.  Nevertheless, neither selection of hook size was having great luck.  He felt the Main Southwest and the Renous were both still a little on the high side.  While at George’s, pick up a copy of  Salmon Country and Paul Marriner’s new book Modern Atlantic Salmon Flies for sale.  Both are $45.00

Flies of choice were Shady Ladies, White-tailed Green Machines, on smaller hooks along with the traditional Fall patterns.

Jim Laws of Miramichi Hunting and Fishing in Newcastle, Miramichi reported decent fishing on the Northwest, but not a lot of the catches were bright fish.  Most were hooking into grilse.  The Main Southwest reported lots of fish, but catching them was a bit of a challenge.  Water conditions were good.

Flies of choice were Ally’s Shrimp and other Fall patterns along with White-tailed Green Machines, Shady Ladies and Undertakers.

Syd Matchett of Trout Brook Fly Shop on the Northwest Miramichi said angling there was still decent.  One angler and his daughter caught a salmon and a grilse between them on the weekend.  Brent Haining hooked and lost a nice salmon.  The water was a bit low and could use a bump up.

Debbie Norton of Upper Oxbow Outdoor Adventures on the Little Southwest Miramichi had the honour of reporting the biggest catch of the week.  Paul Elson Sr. landed and released a C. C. M. Mountain Bike on the shore at Somer’s Bridge.  I’m not sure what the secret fly was, but I’m guessing a Greasy Oil-Slick.  Johnny Burris of North Carolina was in for some “Cast ‘n Blast” and went home with a 1,000 pound Bull Moose.  Norton said there were good numbers of fish around, but not a lot of fresh ones. Guests were catching some, but there were not a lot of takers.  Water conditions were good.

Fly of choice was the Cosseboom.

So with the Fall colours starting to appear, the start of bird season it is time to get out and “on the water”.

Thought for the Week: “There he stands, draped in more equipment than a telephone lineman, trying to outwit an organism with a brain no bigger than a breadcrumb, and getting licked in the process.”  ~Paul O’Neil, 1965

HUMOUR: “Nothing grows faster than a fish from when it bites until it gets away.” Anonymous

CONDOLENCES:  Our thoughts and prayers go out to angler and Maritime Hockey Great Billy Riley on the death of his son.

The Bangor Daily News covers the Maine perspective on the farmed salmon.
http://asf.ca/news.php?id=758

Outdoor Canada reports the story from a Canadian perspective
http://asf.ca/news.php?id=760

ASF’s Webworks is an updating service on the world of the wild Atlantic salmon. If you wish to be added or removed from the list, email .

In case you missed them last week:  New ones next week.