For the most part, another angling season is in the books.  Generally speaking, the last week of angling was tough fishing for most.  One exception was the Northwest Miramichi which, according to Syd Matchett, continued to fish well until the last day when the rain came. 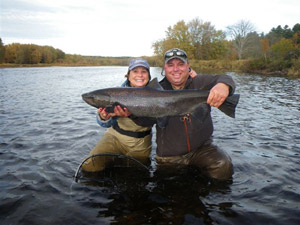 A 26lb hen caught by Lisa Haldane on a #6 Green Slime at Ledges Inn in Doaktown on Wednesday, October 12, 2011

George Routledge said that the Quarryville and Blackville areas were very quiet with only the odd fish being caught.  That is not to say that anglers were not catching.  As always, there were places that fished well into the final day.

That aside, the 2011 season has to go down as one of the best years in a long, long time.  Catches were excellent and water conditions were almost perfect for the fish through out the season.  Even those who did not have great luck, had the opportunity to see a lot of fish.  There were also very good reports of big salmon being seen through out the season.  Count numbers are good, and on a reasonable par with last year which was also good one.  One wonders with the unusual amount of high water if many fish avoided the counting fences, making the returns even better than statistics show.

Thought For The Week: “I have many loves and Fly-Fishing is one of them; it brings peace and harmony to my being, which I can then pass on to others.”  ~ Sue Kreutzer

My name is Doug Smith, I am the owner of Streamside Canada Magazine. I would like to take this opportunity to offer your members the chance to view and read our publication free of charge. Streamside Canada can be found at www.streamsidecanada.com. The publication is free, and you can also read www.greatcanadiansportsman.com. Also, should you, or any of your members from the Fly fishing club wish to submit fly fishing editorial from Atlantic Canada, that would be great. The editorial can be forwarded to me at . Should you have any questions please feel free to send me an email.

NOTE: I believe that not just the Fly-Tying club, but all are invited by this letter which is why I included it in the column

A little note you may add at the final report for this year, if you wish. Eskape Anglers is proud to have assisted in bringing you Doug Underhill’s Miramichi Report. It was a good year for all! The assistance this report has given to the anglers was well accepted by those who came to Eskape to pick up supplies.

Remember to Dry your breatheable waders both inside and out to prevent mould from forming and causing a leak next spring. Take your rods apart, and wax the ferrules with paraffin Wax (a Christmas candle will suffice), then store in a dry place.

Eskape is open all year for fly tying supplies, Gifts, and fishing Supplies. The good Lord willing and the Creeks Don’t Rise, will see you next year.

Many thanks for these reports I truly enjoyed them. Now as a novice fly tyer I am set to begin my winter knitting. I plan to bring a number of fly tyers to the Eel Ground School this winter and introduce fly tying to some of the older students. Again thank-you. I am wishing winter away.

I have a question regarding the flies of choice at the end of each report. When they report that the fishing was poor would it not be possible that the flies of choice were, for all intents and purposes, a bad choice? It seems as though there a very few flies of choice ever reported by the varying fishing establishments. I have caught many fish on flies that have never appeared on the flies of choice section while those that were relying on those patterns were going entirely fishless.

Last year on the Cains River, at the mouth of the Sabbies, I used flies that I know had never been seen by any of the fish in the pool and could not keep the fish from going wild for them. Meanwhile on the other side of the river, on the public side, fishermen were using the standard Ally’s Shrimp and white tailed green machines to no avail. I mentioned to more than a few anglers to put on a fly that they had never used before and would never think to use at that pool and they were then successful in landing a fish. I don’t believe that I am a great fisherman by any stretch of the imagination but I do think outside of the box with everything that I do and I use a good many flies that we used for trout out in the prairies when I lived there. I believe, that at times, the fish become so accustomed to seeing the same fly drift past their nose, especially those fish in places like the Sabbies pool where fish will hang for some time, that the patterns become like the furniture.

I am convinced that fishermen are, in large part, not being creative enough to understand that the fly that is the best for salmon has yet to be discovered. It is an imaginative process that takes much into consideration when making the choice of flies to use. I love your report on the river and am very pleased to see what kind of fruit has been born from the efforts of all who work toward a better fishery here in NB. I think that salmon fishing to NB tourism should be what Anne of Green Gables is to PEI. Keep the reports coming in. There are many of us that love to receive them on a weekly basis. Tell me more about advertising on your site for my site www.giffinartworks.com. Bye for now.

RESPONSE to the above:

HI Andrew: As the column evolved over the years (then for newspapers), a workshop specialist suggested that rather than saying what was “The Best Fly” it would be better to take a reading on what flies were being used. As you say, who can really say what the “Best Fly” is. Many have their own choices and theories, and as the fish are the only true experts (in an ironic way, as the flies they choose, are probably the ones they wish they had avoided). So hence, a conclusion was made that I would give the “choices” that anglers use, allowing each angler to judge for him or herself. Often, if an angler catches a fish, everyone wants to know what fly was used, and most then put that fly on their leader. If 100 anglers are using say White-tailed Green Machines and 75 fish are caught, while 10 anglers are using Blue Charms and 9 fish are taken, which is the better fly? I guess choosing the “perfect fly” is what makes angling so much of a challenge and so much fun. As you say, it is extra special when a person defies the odds, tries something different, and has success. Thanks for the e-mail and kind words. AS you very nicely put it, angling is sometimes thinking “outside of the box”. May we all “keep guessing”. Thanks for getting us all thinking. Keep up the excellent art work as well!

Background to the Salmon Summit can be read below, including ABSTRACTS of scientific papers presented:
http://asf.ca/news.php?id=764

ASF’s Webworks is an updating service on the world of the wild Atlantic salmon. If you wish to be added or removed from the list, email " >

TWO MORE COLUMNS TO GO: “Storing equipment” and “The Christmas Shopping List”
Until next week,