As we move into the final weeks of the season for most rivers, there are positives and negatives. On the plus side, there are very good numbers of fish being report across the system, although not many fresh ones. The negative is that in some places they are not taking well and are hard to hook. The water is also high in some places. 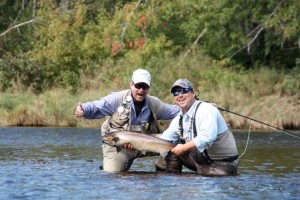 Jay Fargher and guide Andre Anthony from the Ledges in Doaktown, NB on the Main Southwest Miramichi River with a nice MSW salmon

The counting fences at both Cassilis and Millerton are both reporting very few fresh fish each day, and some days none. Yet, anglers are catching some darker fish with sea-lice.

MSA Hatchery Manager Mark Hambrook said the hatchery staff will be starting the hatchery spawning process next week. They will be doing this on alternate days and only in the mornings. If anyone is interested in observing the process, please contact the hatchery at (506)622-1781. There is no admission fee.

W. W. Doak and Sons in Doaktown said angling was a sort of mixed bag this week. Some spot were having very good angling with some limiting out, while other spots were stagnant. There was a good mix of salmon and grilse, and most of the fish being caught were dark, but the rain had them moving and active. The Doaktown area received a few inches of rain, but it was reported that above them, areas received more.

Flies of choice were all over the map with some having success on Shady Ladies, White-tailed Green Machines, and Undertakers on nos. 6 & 8 hooks while others were using traditional Fall patterns such as General Practitioners, Ally’s Shrimps, Copper Killers and Rusty Rats. Besides big and small, and light and dark, some were also using Dry Flies and Bombers.

Derek Munn of Ledges Inn in Doaktown and Mountain Channel in the Rapids area said they were having good fishing. Anglers had caught three on the Cains River Wednesday, and over the previous five days guests had hooked 80 fish. There was a good mix of salmon and grilse with a lot of the salmon in the 12-20 pound range, and a few 20-plus pounds. He said the water had risen about a foot at Ledges, although the Cains could use a tad more. He expected good fish until the season’s end.

Flies of choice were General Practitioners, Green Slimes and Pot Belly Pigs ((an English fly with yellow and orange and Jungle Cock eyes)

Herb Barry Sr. of Herb’s Fly Shop on the Station Road in Blackville said there were barrels of fish around, but they were not taking well. Anglers were however, seeing lots, especially some very good sized salmon. He had watched one evening and saw about 25 salmon all over 10 pounds, but they were very dark. The water had come up a foot on Tuesday and was reported holding on Wednesday. He was expecting it to drop off by the weekend and was looking for some good angling then. 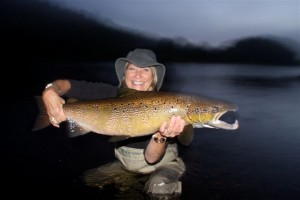 Carol Fargher with her first salmon at Ledges in Doaktown, NB on the Main Southwest Miramichi River

Curtis Miramichi River Outfitting in Blackville said anglers were seeing lots of fish, but were only catching a few. Water levels were up and on the rise Tuesday.

Flies of choice were None-of-your-Business, along with Christmas Trees and Ally’s Shrimps.

George Routledge of George’s Fly Shop at the Mouth of Renous in Quarryville said angling was pretty slow there with about 2 or 3 the total of a day’s catch. The water was a tad high, but the numbers of fish around was very good, and went for all rivers in the system. There were some fresh fish with sea-lice, but they were dark. Anglers were seeing 35-40 a day jumping, but they were not interested in taking a fly. While at George’s, pick my book Salmon Country and Paul Marriner’s new book Modern Atlantic Salmon Flies for sale. Both are $45.00

Flies of choice were No. 8 Shady Ladies, nos. 6 & 8 White-tailed Green Machines, along with Ally’s Shrimps, General Practitioners and L. T. Specials on hooks no bigger than no. 6.

Jim Laws of Miramichi Hunting and Fishing in Newcastle, Miramichi reported angling as being a bit slower this week. The water levels had come up and probably would raise more with the rain Wednesday. However, anglers were seeing good numbers of fish even if they were not catching as many as they might like. A decent mix of salmon and grilse was being reported. 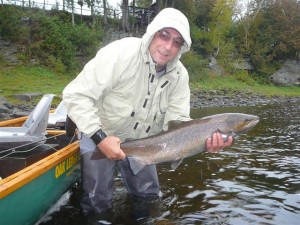 Syd Matchett of Trout Brook Fly Shop on the Northwest Miramichi said angling was good with a decent mix of salmon and grilse being reported. Jon Saunders had caught a grilse on Friday, and Alvin Bell had caught three fish on Friday, one on Saturday and two on Monday. The water was up, but still fishable.

Debbie Norton of Upper Oxbow Outdoor Adventures on the Little Southwest Miramichi said they were still doing some catching. John Wood from Ottawa was the Senior Member in camp and the high man with a 21-pound salmon. Dianne Wenham of Bass River, NS hooked a 20-pound salmon. There were also some grilse caught, but angling was a bit tough as the water was high after the rain. She was hoping for it to pick up by the weekend and expected a strong finish to the season.

Flies of choice were Maribous, General Practitioners and Mickey Finns

So with a long weekend ahead, nicer weather in the forecast and good numbers of fish around it is time to be “on the water” while throwing in a little “Blast ‘n Cast”.

Thought for the Week: “Men and fish are alike.  They both get into trouble when they open their mouths.  ~Author Unknown

HUMOUR: “The two best times to fish is when it’s rainin’ and when it ain’t.” ~ Patrick F. McManus

CONDOLENCES:  Our thoughts and prayers go out to the family and friends of John MacLennan who passed away this week after a long battle with cancer.  He was my long-time friend and angling buddy, and I will miss him dearly! 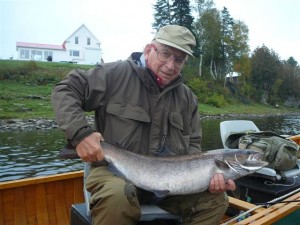 Have a HAPPY Canadian THANKSGIVING!