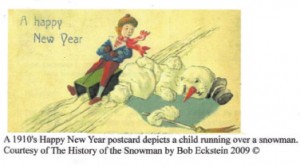 For more information or to buy Bob's book go to http://www.amazon.com/History-Snowman-Bob-Eckstein/dp/1416940669

Let it Snow
By Anne Lindert-Wentzell

I, admittedly, live a frigid lifestyle. I’m not the best conversationalist. In fact, you won’t hear a murmur out of me. Unless of course we meet, unexpectedly, on a cold winter evening, and you’ve partaken
in too much holiday cheer!

I’ve been known to be a womanizing, alcohol drinking scoundrel. It wasn’t really my fault; I guess the years of abuse finally got to me. But that was a long time ago. I’ve cleaned up my act.

My evolution goes back … way back, possibly to the Ice Age. I was around in the Dark Ages, for sure, a time of social chaos and repression. In fact, in 1511, the city of Brussels was inundated with many of my kind; an iconic presence that though silent, spoke volumes. Our sexually explicit and politically fuelled retaliation expressed an anger toward the church and local government. I had no control in the matter. I was at the mercy of the masses.

I took it all in stride, as best I could, until the late 1800′s. It was then that I succumbed to the bottle and smoking. There’s no denying it. The proof can be found in the popularity of postcards and magazines at the time with myself the winter subject. A 1898 postcard has me carrying a couple bottles of champagne to an office party, already somewhat inebriated smoking a pipe.

By the early 1900′s my party animal instincts were out of control. I was a pickled, skirt chasing lush; a frozen W.C. Fields in look and manner.

With the end of Prohibition in 1933, I had become something of a spokesman for most leading liquor companies as well as personal hygiene problems ads-bad breath, gas and yes hangovers. Oh the shame! 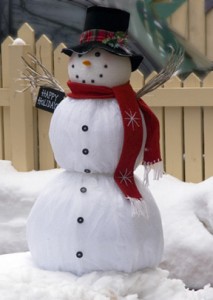 Aside from the pictorial abuse, I was also physically abused. Being the “snow man” target was a favourite past-time for young children in the 19th century variation of the game, “Aunt Sally”. Imagine being bombarded by snowballs all in an effort to score points, or being plowed over by sleds into a state of nothingness. Bludgeoned by brooms. And dogs. Don’t even get me started on that one. Merciless.

My image has changed, thankfully. Frosty, who we all know and love debuted in 1949. Gene Autry brought my character to life in the Christmas song of the same name. Advertising had much to do with my new persona. With an improved image – nicer scarves and a silk top hat, I helped sell everything – tuna, insurance,
even Cadillacs. It seems that society wanted a wholesome image of me, for the sake of the children; a presence that was family orientated and innocent.

Some other facts about me:
* Creating me provides a great aerobic workout, burning 240 calories an hour.
* I’m an art form – Michelangelo sculpted snow figures in 1494 Florence, Italy.
* I’m a reflection of the times; an artistic expression, unique.
* Average number of snowflakes required in my creation: 10 billion.
* The world’s largest snowman: 122 feet, 1 inch, Bethel, Maine, 2008.
* I cost nothing to build – requiring only creativity and energy.
* A detailed account of my evolution can be found in Bob Eckstein’s, The History of the Snowman.

My current concern is that I may soon become a distant memory; a depiction found only in pictures of yesteryear. Global warming and me are not the best of friends. My only hope, as the 1945 song goes, is –
Let it snow …
Let it snow …

For more information about snowmen visit Today’s Snowman or get Bob Eckstein’s book The History of the Snowman.

Anne Lindert-Wentzell has lived in Atlantic Canada for 22 years, being originally from the big city of Toronto. Rural living appeals to her. She enjoys the freedom of her acreage near the sea. Her husband, two dogs, two cats and the occasional visits from Captain and Tennille – two muskrats that now call her pond home – are pleasant company. She has a son in university. Anne started freelance writing seven years ago and has never regretted her career change. She has numerous articles both in print and online.

This story previously appeared in the Chester Clipper in December 2009.