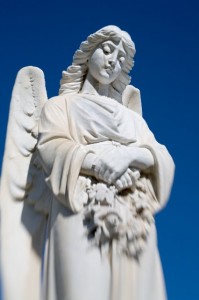 “Momma,” yelled five year old Sebrina, as she rushed through the door. “I’m gonna be an angel.” Then she giggled, “I mean an angel, in the Christmas play. Mrs. Kathy chose me. It is the specialist part in the whole play.”

“Most special,” corrected her mother, Audrey. “Do you have to bring your own costume?” she asked her daughter.

Faye was concerned about the cost. They had been living on a fixed income, since her husband’s death a year ago. Her waitress job didn’t leave room for extras. Sebrina would have a very meager Christmas this year. Faye prayed, asking Jesus to provide a way for her to make the needed costume.

The play was to be presented Christmas Eve night. It was now the beginning of Christmas week. Audrey sure hoped her beloved Jesus would act soon. There was less than a week to finish the angel robe.

Audrey was dragging the tiny artificial Christmas tree and box of ornaments from the attic. Suddenly, she saw her wedding gown inside a plastic garment bag, hanging on a nail in the wall. Her memories called to her.

She was remembering happier times, when she and Jack were newlyweds. They had been high school sweethearts. Audrey was a waitress at the local soda shop. Jack came in one night after a football game with his team mates. He smiled and winked at her across the room. Audrey’s heart had done an instant flip-flop.

Soon, they started dating and were inseparable. They both attended the same college for a year. They quit college to get married. Jack became manager of the local hardware store, where he worked for 10 years. They had bought this little house and lived a happy carefree life, until his death to cancer, last year.

Audrey’s thoughts were interrupted by her daughter’s voice, calling, “Momma, where are you?” Audrey returned to the living room. The pair decorated the tiny tree, drank cocoa and went to bed. Audrey’s sleep was invaded by mental images of her husband. She eventually gave up on sleep and decided to get a cup of cocoa.

As she sipped the hot beverage, an inspiration came to mind. She would make an angel robe from her wedding gown. Tears came to Angie’s eyes and streamed down her cheeks as she thought of having to cut her dress. Her love for her daughter outweighed her personal feelings.

She sewed all night, finishing the angel gown just before awakening Sabrina for school. The morning before the play, Sebrina found the angel robe draped across a kitchen chair. The twinkle in her eyes and the beautiful smile on her face were thanks enough. Audrey had sewn the gown by hand, not owning a sewing machine. She had learned from her mother, a professional seamstress. Her stitches were all uniform and quite tight.

Angel wings were made of cardboard and a halo of bent clothes hanger. Both were spray painted gold. Audrey had found the paint in a clearance bin at the corner store. She only paid a dime for it. Jesus had indeed provided a costume, in answer to Audrey’s prayer.

Christmas Eve arrived. Sebrina was so excited; she hardly ate two bites of supper. At last, hand in hand, the pair walked to school. The play was a great success. Sebrina made a beautiful angel, with her blonde curls and green eyes. Audrey was very proud of her. She felt her husband’s presence, smiling at the loving sacrifice his wife had made. What better angel robe than one made of a sacrificial wedding gown?

Jacinta is a 60 year old writer, residing in Louisiana with her husband, oldest daughter and puppy named Mimi. She hopes to become a children’s book author and has frequently participated in Bread ‘n Molasses magazine’s 12 Days of Christmas event.