MIRAMICHI – With the rivers, streams, brooks, ponds and lakes now open, she’s full-tilt once the brights start to enter the system.  Already there are reports of a few bright trout on the Northwest and Little Southwest Miramichi Rivers, but generally, angling has reached “in between seasons”.

W. W. Doak and Sons in Doaktown said the water was a bit high and cool, and more rain was expected earlier this week.   The river was not quite wade-able, and the pools weren’t identifiable.   Angling was generally slow as the spring salmon season was ending and the bright sea trout and salmon had not arrived yet.  They felt that realistically, it was still a bit early for bright fish, but they expected sea trout by the end of this week or next.  There were also a few fiddleheads being reported, but they should be in full swing next week.

Flies of choice were mostly streamer patterns such as Renous Specials, Black Ghosts, Mickey Finns and some Muddlers. 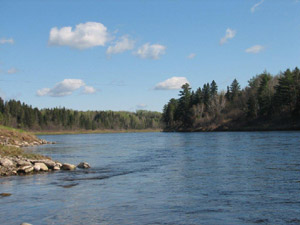 Herb Barry Sr. of Herb’s Fly Shop on the Station Road in Blackville said angling was not very good.  He hadn’t heard of any spring salmon being caught and there were only a few black trout in the 12-14 inch range.  There was one report of a bright sea-trout in the 12-14 inch range.  He expected bright salmon about May 27.  The water was high, but dropping until rain earlier this week.

Flies of choice were Whiskers, Rat-Faced McDougalls, White Wulffs and Muddlers for trout.

Curtis Miramichi River Outfitting in Blackville said angling was pretty quiet with not too much of anything being caught.  The water was high and rain was expected.

Flies of choice were Blue Smelt for spring salmon and Blue Elvers and Elwises for trout.

George Routledge of George’s Fly Shop at the Mouth of Renous in Quarryville said there3 were very few fish being caught in his area, but further down river angling was decent at Doyle’s Brook.  There were still a few spring salmon around and some black trout in the 12-14 inch range, but no brights.  There were few anglers out as the water was still high with only the alder tops showing on the island at the Mouth of Renous.

Jim Laws of Miramichi Hunting and Fishing in Newcastle, Miramichi also reported quiet angling for spring salmon.  Only a few black trout were being caught.  He’d even heard the lobster catches were down.  The only success story was the incidental catch of stripped bass by trout fishermen.  However, he said he would not be surprised to hear of some bright sea trout and bright salmon this coming week.  The water was a bit high

Flies of choice were more summer patterns such as the Green Machines and even some dry flies as anglers were getting ready for bright salmon.

Syd Matchett of Trout Brook Fly Shop on the Northwest Miramichi said he heard of a few bright trout in the 15-17 inch range in the Wayerton/Trout Brook area and a few lower in the river earlier this week.  There were also a couple of reports of bright sea trout on the Little Southwest Miramichi. There was also an unconfirmed report that Holly Harris had trained a black cat to fish smelts for him.

Flies of choice were Black Ghosts and Yellow Butterflies on nos. 2 & 4 hooks.

Debbie Norton of Upper Oxbow Outdoor Adventures on the Little Southwest Miramichi said fishing was slow with not really much being caught.  The only exception  was the large number of bass being hooked by trout anglers.  The smelts have gone and the smolt are migrating out in good numbers.  The water was up again after the rain.

Now might be a good time to ponder running a few canoes to see if there are a few brights on their way in and to see if the fiddleheads are ready. So get out and “on the water”.

Thought for the Week: “”Be patient and calm – for no one can catch fish in anger.” – Herbert Hoover

River-Lore:  The oldtimers maintained that if the swallows are back, there would also be bright fish in the rivers.

E-MAIL:
Doug, thanks very much for including my blog updates on your fishing report, which I enjoy immensely.
Best regards,
Gary Tanner

Hey Doug,
The idea of the alder leaf the size of a mouse’s ear has been a long-time measurement passed down to me from my great grandfather and grandfather fishing the myriad of lakes in Nova Scotia. Its a family tradition, and I’m convinced it works! (Just gotta catch a mouse, and find my tape measure) LOL. I always enjoy your column, and the great information you provide!
Tight lines, my friend!
Tom Benjamen

Hey Doug,
I was just wondering if the trout in Blackville are fresh from the ocean or heading out to the ocean.   I fish in Juniper and am trying to time it right this year.. Ha ha I’m always a day late. Thanks,
Dwain Burpee