The two key words this week are “slow” and “low”, and by the weather forecast, we might add “warm”.  The traps nets at both Cassilis and Millerton were averaging less than five fish a day.  There are small squirts of fish moving through, but in no great numbers.  A few were seen jumping on the weekend in the city area.  So, we are still in the waiting mode for the June run to begin.  However, the fish go by their own calendars and they know water conditions a lot better than we do, so we have to trust them and be patient. 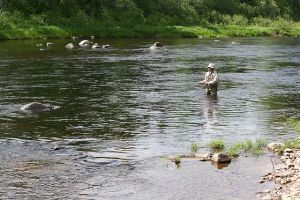 Angler tries his luck on the Northwest Miramichi

Doug White’s Tammerack Sports Fly Shop in Juniper said the water is dropping off there and with no rain expected until next week the prospects of catching a salmon are not good. However, there are a few salmon in the river and at the counter on the North Branch a small number have been recorded. People are still fishing and catching Sea-trout on both branches as well as numerous pan trout. Please note the North Branch from the Piers Pool down to the Forks will see very heavy canoe traffic as the annual rally takes place this weekend.

Flies of choice are are SMALL dries, butterflies, bugs and streamers.

W. W. Doak and Sons in Doaktown said angling was slow, with anglers only getting a few fish scattered along the river.  The water was getting low in the Doaktown up, but adequate from Doaktown down.  However, a good rain would be welcomed.  They had heard of one fish below Doaktown and one in the Upper Blackville area.  Water temperatures were good in the mornings averaging 66 Fahrenheit, but could get into the low 70s later in the day with the warmer weather.  But warm water was certainly not an issue yet.  Anglers were picking up a few trout stragglers here and there.

Derek Munn of Ledges Inn in Doaktown and Mountain Channel in the Rapids area said there were a few fish around and anglers were catching some salmon and the odd grilse, but certainly not in any great numbers.  Mountain Channel was producing a few.  Basically, there were just not a lot of fish coming through.  A good rain was needed.  Their lakes were fishing well.

Flies of choice were White-tailed Green Machines and Undertakers.

Herb Barry Sr. of Herb’s Fly Shop on the Station Road in Blackville said fishing was poor with only the odd one being hooked.  He’d heard of maybe two or three salmon this week, and a few lying here and there.  There were no trout to speak of.  The water was low, but a perfect height around the islands in Blackville.

Flies of choice were White-tailed Green Machines, Shady Ladies, Preachers, Green Rats and a mixed bag of others.

Curtis Miramichi River Outfitting in Blackville said angling was pretty quiet with only the odd fish being caught.  The water was low and warm.  Kathy Colford did catch and release a nice 14-inch sea-trout.  Canoeing conditions were good on the Main Southwest, but the tributaries were low.

George Routledge of George’s Fly Shop at the Mouth of Renous in Quarryville said angling was very poor.  There was one grilse caught at the Mouth of Renous Tuesday afternoon, and one on a Blue Charm last week, and that was about the only fish he’d heard of.  The water was low and getting very warm, even hot.  George said if anyone hooked a salmon he advised to break it off quickly without handling it and playing it a long time.  If anyone did that he said to come to his shop and he’d replace the fly for him or her.  A good rain was definitely needed.

Flies of choice were White-tailed Green Machines, White-tailed Shady Ladies, and Black Ghosts on no. 6 hooks.

Jim Laws of Miramichi Hunting and Fishing in Newcastle, Miramichi reported slow angling with only a few fish being caught or seen here and there along the system.  The water was low and warm, and a rain was badly needed.  He had no trout reports.

Flies of choice were Same-Thing-Murrays, White-tailed Green Machines and mix of Dry Flies.

Syd Matchett of Trout Brook Fly Shop on the Northwest Miramichi said angling was very quiet.  There were not many fish getting up.  He’d heard that a little splash went up the Main Southwest on the weekend, but it was definitely small.  The few fish there were around were not too interested in taking a fly.  Even the Crown Reserve stretches were reporting only the odd fish being hooked and only a very few seen.  There was the odd trout seen, but not many.  Rain was definitely needed as the water was low and getting warm. 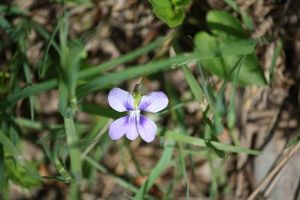 Debbie Norton of Upper Oxbow Outdoor Adventures on the Little Southwest Miramichi said there were no fish and she didn’t know why.  “There must a later run coming”, she said.  The water was adequate, but certainly not summer low.  A good rain would be welcomed.  “But there is a lot more to fishing than just catching fish” she added, so it is still nice to just be out there.”

Fly of choice was the Green Machine with bunny fur.

Hopefully, we will soon get some much needed rain to freshen the rivers and bring in more numbers of fish.  Then we can get out and “on the water”.

ANY FINANCIAL CONTRIBUTATIONS TOWARD HELPING WITH THIS COLUMN ARE GREATLY APPRECIATED

Thought for the Week: “Life is like a tackle box. Just when you think you have everything you could possibly need in your arsenal of lures, baits, and other assorted odds and ends, you find yourself in a situation where you have to run out and get something else. So it is with life. Just when you think you’ve seen it all, done it all, and heard it all, something new happens. And afterwards, you store it away in the appropriate compartment, where it may or may not be used again.”  ~ Bill Cari

RIVER-LORE:  Syd Matchett said the oldtimers used to say that when the fire-flies are out, there should be a good grilse run.

Good Morning Doug: My nephew purchased your Book and both Bob & I are enjoying it very much.  Great photos as well.

Opportunity for Free Canoe Trip for Youth in New Brunswick.

Between August 27 – 31, 2012, the Canadian Canoe Foundation in partnership with Partners for Youth, Canoe Kayak New Brunswick (CKNB) and the NB Chapter of the Canadian Parks and Wilderness Society will be leading a five day environmental education canoe trip down the St. Croix River.

This adventure also includes a 2 day pre-trip orientation and canoeing skills development camp on August 16-17th, 2012. The participants will receive instruction in canoeing and camping skills while learning about the ecology of the St. Croix.

All at no cost to successful applicants.

Structured lessons during the canoe trip will focus on:

a) environmental changes facing the St. Croix
b) important work being done by environmental organizations, government and companies in order to manage the long-term health of the watershed
c) what ordinary citizens can do to be part of the solution.

To be eligible, the youth must be:
– in grade 9, 10 or 11 as of June 15, 2012.
– attend school and be a resident of New Brunswick.
Deadline to register on line is 1 July 2012: http://canadiancanoefoundation.ca/canoefo/registration.php

Please note that time is of the essence! Deadline to register is July 1, 2012.

This is frowarded to you by Canoe Kayak NB (CKNB) in partnership with the Canadian Canoe Foundation.

Canoe Kayak NB expresses sincere gratitude to the Canadian Canoe Foundation and the other partners to create this great opportunity for youth.

Funding and support for this learning adventure is generously by Mountain Equipment Co-op (MEC), CKNB, CPAWS NB and partners for Youth.