My Father’s Birth into Eternity

June 17, 2012/Giv'er Miramichi/Comments Off on My Father’s Birth into Eternity/Arts & Entertainment, Community & Fundraising 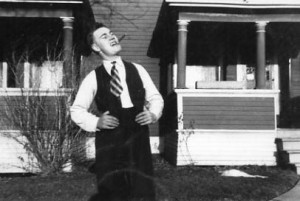 My father left this world with a grace he rarely exhibited when living. Oh, I’m not talking about how it was for him after the stroke, as he lay on a hospital bed for days on end, with all manner of tubes sticking out of his body. That was not graceful. Nor am I talking about the awkward dance that we family members made around him as we clumsily tried to make peace with the fact that he was dying. Lots of good intention there – but no grace.

Grace did come however in the ebb and flow of his last breaths. After the doctor turned the ventilator off. After those that did not want to be present left the room. After a hushed recitation of the Lord’s Prayer and a sweetly sung “Amazing Grace” (it didn’t seem quite appropriate to sing his favourite song “O, how they danced on the night they were wed”).

In the silence that followed, I prayed for courage to say good-bye to the man who was my father; the blue collar worker with the heart of a poet and eyes the colour of the sea, who drank too much and never once saw his true beauty.

As we joined hands around his bed, my father’s breath became like the waves of the ocean – sometimes calm, sometimes wild – a soft inhale, an exhale so quiet it seemed not really there, then a deep inhale followed by a breath which roared out like a crashing wave. A long silence. We looked up at each other, unsure. Was that it? Was he gone?

I began to weep. We all began to weep. Muttering prayers and still holding hands, we gathered more closely around him. Then a surprise. Another inhale – this one deep – deep – deep. Eternity yawned wide, and my father’s body began to shudder.

And then … a movement so beautiful it could only be choreographed by the Divine. My father’s hands slowly and gracefully pull up into a fetal position. Time is slow motion now. We all hold our breath, eyes wide. Then with the last crashing wave of breath, my father breathes his last, exhaling as he pushes his arms down, down, down – as if pushing himself out of his body – pushing, pushing, pushing.

Suddenly I am in the presence of Eternity. I see my father soaring up out of his body. He looks gloriously beautiful. Shaking his head, he opens his arms wide as if to say, “It’s good to be out of there. That was a hard life.”

My face was wet with tears of joy, and I couldn’t stop smiling.

A version of this story was published in 2006 in Selected Journals of Successful Hospice Palliative Care from the 16th International Congress on Care of the Terminally Ill, September 26-29, 2006 in Montreal, Canada. Toronto: Legacies Inc.

Elizabeth Glenn-Copeland moved to the Miramichi, NB with her husband, Glenn in May of 2011, drawn by the beauty of the land and the people. Since then, they have never looked back. Elizabeth writes poetry, short stories, plays and is working on the final draft of a novel. Her work has been published or is forthcoming in Quick Brown Fox, Vitality Magazine, So to Speak, Aquill Rell, The Spirited Woman, The Lorelei Signal, Bread ‘n Molasses and Forge Journal, as well as in various anthologies. Her poem, “All those years”, was shortlisted in the Aquill Rell 2011 Poetry Competition.