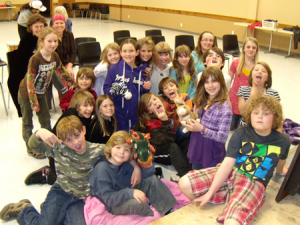 Summer theatre programs for kids in the Miramichi region begin on July 9th.

Curtains up! Light the lights! The joy of live theatre—a way to tell stories that is dynamic and exciting.

This summer Kidplayhouse Productions will be offering a summer theatre arts program for children in the Miramichi region. We’ll sing, dance, act, work with puppets and drumming, and generally have a lot of fun. Children who are interested in theatre production and play writing will have an opportunity to learn more about the nuts and bolts of how a play is put together. And we’ll culminate our time together in a live performance.

For many of us, knowing our children will be having an enjoyable, learning experience is enough. But the truly exciting part of this work for my partner and I, is how the theatre arts can impact a child who is normally never really noticed or worse, who is negatively noticed. Over the last few years, we have witnessed some heart warming, awe-inspiring things, where children have broken through barriers and emerged shining.

First, there was Mohammed. Ten years old, he was labelled as a “behaviour” kid, and spent most of his time looking for ways to aggravate his peers. Most of the adults in his world had written him off as a lost cause. But caught up in the story of a fox trying to find his way into the centre of the earth, he became focused and articulate, and provided a kind of leadership to his fellow actors that many would have previously thought impossible.

Then there was Jane, who self-identified primarily as unable to concentrate and spent time even during school hours in remedial sessions away from school. During the audition process for a particular production, everyone was asked to sing. When Jane sang, the spaced-out girl turned into a diva with a voice that broke our hearts with its beauty. During the rehearsals and performance, we witnessed the metamorphosis of this beautiful young woman.

Hunter was a bit of a wild card. A brilliant young man, he loved to talk fast and use his personal charisma to make himself the centre of attention. He was very literate from an oral perspective, but his reading skills were poor, and he shied away from working with a written script. We wanted to find a way to harness his energy, without squashing his spirit. Given the part of a great leader, he rose to the occasion, spent his break times pouring over his script, and learned how to use his personality in a cooperative way.

Jonathon was so quiet, that it was almost impossible to hear what he was saying. When he enrolled in our classes, we were not exactly sure what to do with him. So we gave him a comedic role. In one short week, he went from being almost invisible to carrying the aura of a rock star. His comedic timing was perfect, and he used the stage like an old pro.

There’s Mary, a grade three student who aced lines written for someone a decade older than she. Melanie, a 12 year old, who overcame her diagnosis of a learning disability, to write a one-act play that brought the house down.

These and the many other children we have had the honour of working with, provide an example of the resiliency of the human spirit, and how theatre arts can bring this spirit forward for all to see. Needless to say, we love our work.

We are honoured to be able to offer three different theatre arts programs for children in the Miramichi area this summer. If your kid is already a “ham” or a “natural”, or if your kid just wants to have fun acting, dancing, singing, playing with puppets and helping out behind the scenes, then register him or her for Kiplayhouse Productions Summer Theatre Arts Program today. The first session begins July 9. For more information about Kidplayhouse, and the summer theatre programs, give us a call, or go to http://kphproductions.com/summerprograms.html

Oh yes, and we’re taking them to perform at the Irish Festival and on Middle Island later in the summer. You could be in for a big surprise.

Glenn Copeland is the Director of Kidplayhouse Productions and has over 30 years experience working creatively with both children and adults. As an actor, composer and performer who regularly appeared on shows like Mr. Dress-up, Sesame Street, and PBS’s Shining Time Station, Glenn impacted a generation of children. Along with a career in adult music, Glenn continued to create programs for children partnering with organizations such as ParticipAction and The Toronto Board of Education.