MIRAMICHI – Not much has changed since last week.  WE did get some rain which produced some decent angling on the Northwest, but little changed through out the system.  DFO regulations and closures remain in effect until further notice with only morning angling between 5 a.m. and 10 a.m. in effect in open areas.  Some rain and a few cooler nights were helping to improve conditions for the fish, but a lot of rain and cooler temperatures are still drastically needed. 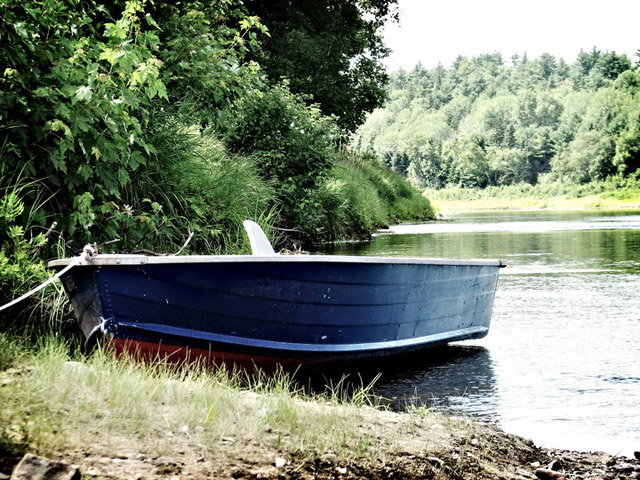 This Variation Order is to fix a couple of loopholes that were found in the previous order VO 2012-061.

South Branch of the Southwest Miramichi River: Close times for various fishing methods to all species now apply upstream to the Highway 107 bridge at Foreston.

Doug White’s Tammerack Sports Fly Shop in Juniper said conditions were the same as last week with no water, no fish and no fisherman.  Maybe some rain in September would help cut the losses.

There were no “Flies of choice”.

W. W. Doak and Sons in Doaktown said some anglers were out trying to catch fish, and were having moderate success here and there in a few prime locations.  But generally, there was a very low effort and not much enthusiasm on the part of anglers to go to the rivers.  They had received some rain last week which brought the water levels to adequate, although water temperatures were higher than ideal.  Cooler nights and shorter days have helped some with temperatures.

Flies of choice were mostly Bombers (80%) and dry flies such as the Wulffs, along with smaller bug patterns in the wets.

Derek Munn of Ledges Inn in Doaktown and Mountain Channel in the Rapids area said they had caught a few grilse.  The water temperature was between 64 & 67 Fahrenheit in the mornings.  He said that water was certainly low, but he’d seen it lower.  There were no fresh fish moving into the system.

Flies of choice were Bombers (white & blue and green & white) along with a variety of Dry Flies.

Herb Barry Sr. of Herb’s Fly Shop on the Station Road in Blackville said he had nothing to report.  There was no fish, no anglers and not much water, and what there was, was quite warm.  Cooler nights were helping but a lot of rain is needed.  There were no fresh fish coming into the system.

As far as “flies of choice were” were concerned, he couldn’t sell a fly.  However, he was getting all of the Fall patterns ready.  All that is needed is fish and water.

Curtis Miramichi River Outfitting in Blackville said angling was still very quiet with not many anglers out.  They had received a raise in water, but it was dropping off quickly again, and still very warm.  Canoeing on the Main Southwest from the Mouth of the Cains down was very good.

Flies of choice were Bombers and White-tailed Green Machines.

George Routledge of George’s Fly Shop at the Mouth of Renous in Quarryville said there were no fish to report and very few anglers out.  He might have had 10 people come into his shop the last three weeks.  One angler had gone out early Monday, but couldn’t get into the water by 5 a.m. as it was still too dark.  He did make it by 5:25 and fished until 6:30 when the tide forced him out, and during that time he’d not seen a fish, so he packed up and went home.  The water level was decent, but the temperature was awfully warm.

Flies of choice were unknown as there was virtually no one fishing.

Jim Laws of Miramichi Hunting and Fishing in Newcastle, Miramichi reported angling as very, very slow.  There were few out, but he’d heard of one angler who hooked a salmon and a grilse this past week.  The water was still warm and dropping quickly.

Flies of choice were a variety of almost anything as anglers were trying everything to find one that worked.  Some were beginning to pick up some Fall flies such as Ally’s Shrimps.

Syd Matchett of Trout Brook Fly Shop on the Northwest Miramichi said angling was actually good.  The Crown Reserve group which had the Crawford Stretch had hooked, landed and released six on Sunday.  Chris Edmonds had hooked a fish on Saturday, Sunday and Monday.  Lisa Malisa from the Moncton area hooked her first grilse ever.  The water was still decent, but dropping.  Cooler nights were helping a bit, but a big rain is needed.

Debbie Norton of Upper Oxbow Outdoor Adventures on the Little Southwest Miramichi said basically there were few, if any, anglers out.  The water was getting low again and was quite warm.  They were hoping for rain and cooler nights to help improve conditions.

The only flies to speak of were a few mosquitoes and they were certainly not the “flies of choice”.

So we continue in a waiting and hoping mode.  A good soaking and cooler temperatures would go a long way to getting us back “on the water”.

Thought for the Week: “There’s more B.S. in fly fishing than there is in a Kansas feedlot.”  Lefty Kreh

Condolences:  Our thoughts and prayers go out to friends and family of Al Cheney who passed away early this week.  Al was an ardent angler who used to work with Jim Laws in his shop in Miramichi.

Healthy Environment & Farmed Salmon Too
ASF’s Sue Scott blogs in the Huffington Post on how land-based aquaculture can solve a host of environmental issues.
http://asf.ca/healthy-environment-and-farmed-salmon-too.html

Hi All,
I am not one to complain about the warm weather we have had this summer but I do know it has dampened many anglers’ plans and no doubt hurt many outfitters businesses. We have had many visitors to the Salmon Conservation Centre this summer that are looking for something to do while they cannot fish. If you are in the area stop by the hatchery – we are at 485 Route 420, South Esk NB – just outside of Miramichi.

If you have not been following the events on the website please check out the stories below. These links will take you to our website – please take a moment to answer our poll and we also welcome any submissions of pictures, stories, questions, etc. Just click the Submit button on the right side of the page.

I also want to remind everyone that the 17th Annual Fredericton Conservation Dinner will be held at the Fredericton Inn on Wednesday, September 19th, 2012. It is expected that another capacity crowd of 500+ will be welcomed at a 5:30 reception, with dinner to follow at 7:00 PM.  The evening will end with a Grand Auction of exclusive fishing trips, fishing equipment, works of art and other exciting items. We are very pleased to be honouring Betty Fitzpatrick at this dinner and encourage everyone who can to join us.  The cost of tickets is $100 each; or reserved tables will accommodate eight people. Please contact Jo-Anne at 457-2220 or myself at 622-4000 to reserve your seat.
Nola

DFO – No Change Expected in the Short Term
Friday August 17, 2012
DFO has said that there will be no change to morning fishing only in the near future. They will monitor the situation closely next week but are looking for cooler days and cold night (12-13 degrees) before any change to the closure can occur….

No Improvement in Numbers at Barriers
Wednesday August 15, 2012-08-17
Twelve grilse and three salmon made their way to the Northwest Miramichi Barrier from August 6th to August 12th. Even with the warm weather…

DFO Variation Order Adds Additional Areas to Morning Fishing Only
Wednesday August 15, 2012
DFO has issued a variation order to include the following in the morning fishing only regulation…