In addition to earlier closure of specific pools (which are still in effect), DFO has also placed conservation restrictions on angling in the open areas of the system as follows:

SALMON FISHERY ON THE MIRAMICHI
Moncton – August 3, 2012 – Fisheries and Oceans Canada (DFO) today announces that angling for all species on the Miramichi River system will be prohibited every day from 10:00 a.m. to 5:00 a.m. the next day, starting Sunday August 5, 2012 at 2:00 p.m. This closure is implemented in order to provide relief to the salmon during the current high water temperatures and low water levels that the system is experiencing. This restriction applies to all scheduled (salmon) waters in the Miramichi system including the Crown Reserves.
Pools and areas previously closed to angling (see notice to fish harvesters dated July 27, 2012) will remain closed for all species during the entire day.

In general, angling has almost come to a complete stop with fishing restricted from 5 a.m. to 10 a.m. each day.  This, combined with very low and warm water conditions, has resulted in very few anglers even heading to the rivers out of respect for the salmon.  Mark Hambrook said if the counting fences were lucky, they might have one fish on a good day.

However, one could always take the kids or grandkids to the MSA Hatchery in South Esk to give them a beginning experience with the thrill of angling as the trout ponds are open and the catching is good!

Click here to view a full listing of closures.

Doug White’s Tammerack Sports Fly Shop in Juniper said the river is so low in Juniper it’s only running twice a week. What little fishing there was has, pardon the expression, dried up. I don’t expect any angling at all until we get rain, except for a few people out due to boredom.

Flies of choice were small bugs and dries

W. W. Doak and Sons in Doaktown said fish were few and far between with only an odd one being caught.  There were more rolling than being hooked.  Water levels were lower than we’d like and temperatures were higher than we’d like which results in a bad combination for both fish and angling.  If nights happen to cool off nicely, then maybe there is a chance for a fish early in the morning.

Flies of choice were mostly dry flies and Bombers.

Derek Munn of Ledges Inn in Doaktown and Mountain Channel in the Rapids area said angling was pretty slow, although they did pick up a couple on the weekend.  Water levels were very low and very warm.

Flies of choice were Blue and White Bombers.

Herb Barry Sr. of Herb’s Fly Shop on the Station Road in Blackville said basically there were no fish and no one out fishing.  He’d not heard any reports of catches, but had heard of some dead fish floating down river.

Flies of choice were a mixture of Bombers.

Curtis Miramichi River Outfitting in Blackville said anglers had caught the odd one or two, but angling conditions were very poor with the water very low and warm.  However, canoeing from the Mouth of the Cains River down was still good.  Rain was needed big time.

Flies of choice were Blue Charms and Bombers.

George Routledge of George’s Fly Shop at the Mouth of Renous in Quarryville said there was one grilse caught last Thursday, and since then he’s seen no one fishing.  He said there is a sign in front of his shop with the closures information on it.

Jim Laws of Miramichi Hunting and Fishing in Newcastle, Miramichi reported angling as very slow with the rivers almost shut down.  There was only the very odd fish being hooked.  He said that to play a fish in this weather was almost guaranteeing its death, so his advice to anglers was to take it easy for a while and give the fish a break.

Flies of choice were Bombers and Dry Flies.

Syd Matchett of Trout Brook Fly Shop on the Northwest Miramichi said angling was extremely slow with very few anglers out.  The water was very low and very warm.

Flies of choice were small dark flies such as Bear Hairs, Shady Ladies, and Undertakers on nos. 8 & 10 hooks along with a few White-tailed Green Machines also on the smaller hooks.

Debbie Norton of Upper Oxbow Outdoor Adventures on the Little Southwest Miramichi said basically they were not angling as the water was too low and too warm, and if a fish was hooked it would most likely die.  “It’s pretty grim” she said.

There were no “Flies of choice” as they weren’t fishing.

So be patient, stay away from the rivers and put a few “good words” in for lots of rain.  Then we can  get out and “on the water”. 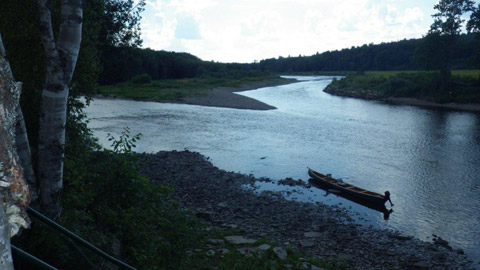 Thought for the Week: “The best fisherman I know try not to make the same mistakes over and over again; instead they strive to make new and interesting mistakes and to remember what they learned from them.”  John Gierach “Fly Fishing the High Country”