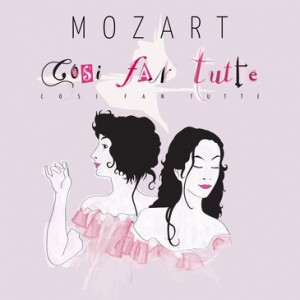 The opera Così fan tutte performed by the Jeunesses Musicales du Canada (JMC) will make eight stops in New Brunswick this November and December in Dalhousie, Caraquet, Bathurst, Miramichi, Bouctouche, Moncton, Fredericton and Edmundston. Composed by Mozart, this light comic opera will bring delight to all.

About Così fan tutte…
This year, JMC has decided to enchant the public with Mozart and his famous Italian comic opera Così fan tutte. Among all operas presented worldwide, Così fan tutte is no doubt one of the most performed and much appreciated by the public. Joy and delight await everyone in this fanciful and far-fetched story of these two uncommon couples. Literally “Thus do they all”, this 18th century opera tells a tale of jealousy, trickery, and mischief.

In a staging transposed to early 1960s, Mad Men style, stage director Alain Gauthier uses his customary originality to rediscover an opera which, for years, conquered the heart of many music lovers. With the talented pianist Louise-Andrée Baril as musical director, this concert will appeal to a wide audience of connoisseurs and insiders.

The cast is composed of some of the best up and coming Canadian talents: Vania Margani, Charlotte Burrage, Adrian Kramer, Aaron Sheppard, Julie Ludwig, Philippe Bolduc as well as Jérémie Pelletier at the piano.

Bathurst welcomes JMC on November 15, 7:30 pm at École secondaire Népisiguit, 915 Sainte-Anne. Contact (506)548-4805. On November 17 at 7:30 pm Così fan tutte takes the stage at the Théâtre Gilles Laplante in the Carrefour Beausoleil School at 300 Beaverbrook Road in Miramichi. Contact  Line Thibodeau for more information at (506)627-4220 or visit their website www.carrefourbeausoleil.ca Individual tickets will be available at the door for $20.

On November 18 the opera moves on to Bouctouche for a 3 pm matinee at Salle Antonine-Maillet in École polyvalente Clément-Cormier. Contact (506)743-7200.

In December there are two final shows in New Brunswick beginning on December 5 at 7:30 pm in Fredericton at the Centre communautaire Sainte-Anne, 715 Priestman Street. For more information telephone (506)453-2731. And finally on December 7 at 8 pm at Cité des Jeunes A.-M.-Sormany, 300 Martin Street in Edmundston. Tickets are available at Université de Moncton, campus d’Edmundston, pavillon Simon-Larouche.