TNB Returns to the Miramichi!

November 24, 2012/Giv'er Miramichi/Comments Off on TNB Returns to the Miramichi!/Arts & Entertainment, Community & Fundraising 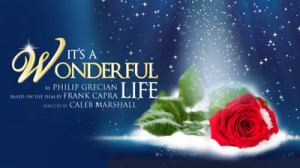 Congratulations to Joanne Robertson! She left a comment on this post telling us which holiday classic was her favourite and won a pair of tickets to the evening performance of TNB’s “It’s a Wonderful Life” in Miramichi on December 15th!

For the first time since the 2005-2006 season Theatre New Brunswick will return to the Miramichi. On December 15, TNB presents two performances of the holiday classic It’s a Wonderful Life at James M. Hill High School.

George Bailey is the everyman of Bedford Falls whose loyalty and generosity keep him from ever leaving his hometown. One fateful Christmas Eve, he finds himself alone and in trouble. With a little divine intervention – and one determined guardian angel–will George Bailey learn that his has been, after all, a wonderful life? 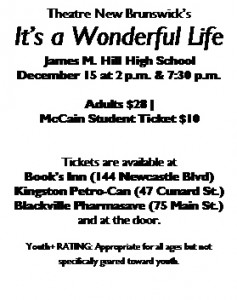 “This remount of our 2009 hit It’s a Wonderful Life marks TNB Main Stage’s most significant return to Main Stage touring in seven years including a stop in Miramichi. I was born in and have close ties to Miramichi and I couldn’t be happier that TNB is returning to that community,” says TNB Artistic Producer, Caleb Marshall.

It’s a Wonderful Life Miramichi performances are made possible through the generous support of the Canada Council for the Arts, the Province of New Brunswick, McCain’s Foods, our production partner Tim Hortons, and our Miramichi performance partners Park Place Décor and Northumberland Dairy.

Theatre New Brunswick would also like to thank the Miramichi Friends of TNB whose support has been invaluable in bringing this production to the Miramichi community. 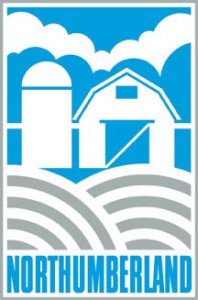