On the Twelfth Day of Christmas …

January 5, 2013/Giv'er Miramichi/Comments Off on On the Twelfth Day of Christmas …/Arts & Entertainment, Community & Fundraising 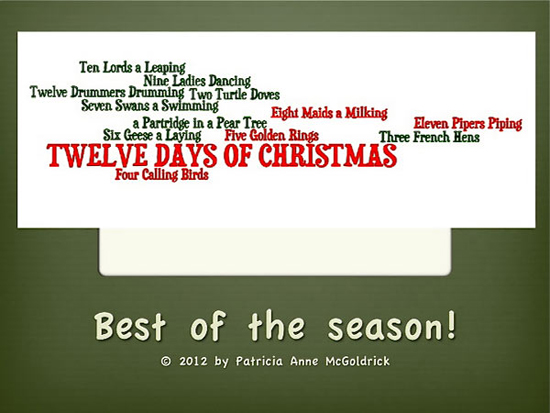 A Photographic Memory
by Kellie Underhill

A few years ago I watched a film called Fathers and Sons. It’s well worth watching if you haven’t seen it. The characters say things we all think, and then wonder if anybody else thinks that way too. So many parts stuck with me, brought me to tears, inspired me to write. 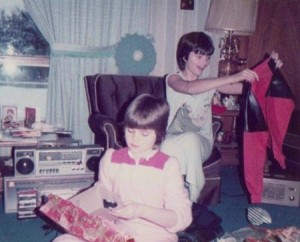 In the first vignette the father, played by Bradley Whitford, has a moment outside on the step with his son. They are watching his grandson running and playing in the yard. Whitford’s son gets up to go inside and get his camera to capture this “perfect shot” of his boy playing in the water sprinkler. But Whitford’s character stops him, tells him to just sit down and watch his son.

It’s a powerful moment, a reminder of how quickly kids grow up and how we should be present in every second of their lives. This really struck a chord with me.

I have a lot of friends and family who take photos of everything, but I’m very much the opposite. I’ve always had cameras, ever since I was a little kid, but I’ve never been what you might call “snap happy”, not even when I was young. I’ve never particularly liked photos of events or gatherings, photos with the sole purpose of recording something for your personal records.

I probably inherited this from my mother. Growing up, my mom would snap the pictures but then never develop the film. The little canisters would sit in the fridge for years and years. Eventually she might send them away, and sometimes they’d turn out and sometimes they’d be too old and ruined, and it never seemed to matter much which way it went.

I remember when we went to see the Rolling Stones in concert at Magnetic Hill in Moncton years ago and my brother-in-law purchased everyone a disposable camera at the concessions. He’s very thoughtful that way, and I always appreciate everything he does for me. But at the same time there was part of me that was bothered by the idea that now I had to carry around this camera, I would be expected to take photos and share them later.

I really had to be careful that I didn’t pop off all the shots before the Stones even took the stage; I was so anxious to be done with this task. At the time I just thought it was the “having to hold onto this thing all day” that was bothering me. It was a concert so I didn’t have a purse or a bag or pockets or anything … just the camera. 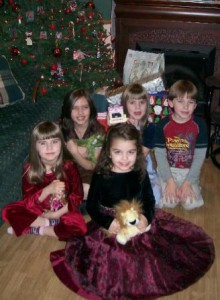 But when I saw that scene in the Fathers and Sons film I immediately understood that I’m like that with all recording of my life’s events. I want to see it, experience it, with my own naked eye, not filtered through a lens, not wondering if the light is okay, if I need flash, if I should zoom. I want to be in it, let it engulf me, become part of me.

And if it matters, later I’ll recall the moment in incredible detail and I’ll write about it. I don’t need a photo in order to help me remember. I can be back in that moment in my mind any time I want, especially if I’ve written about it.

I went to a Bon Jovi concert in Toronto a couple of years ago and none of my pictures turned out. Not a single one. And it doesn’t bother me a bit, because I’ve got not just the concert, but the whole trip, inside me and I call up any part of it and get excited or perturbed or tired or have my mouth water with anticipation depending on what I felt in the moment.

So, I get this being in the moment without a camera message that the father was trying to bring home to his son. That’s my natural inclination.

Then a few years ago I went to my deceased grandparents’ house to spend Thanksgiving because my sister and her family had moved into the vacant home for a few months while they waited for their new house to be constructed. I leafed through old photo albums into the wee hours of the night. There were people I recognized, events I attended, photos of me, my sisters, my cousins, aunts, uncles, people I didn’t recognize and perhaps had never even met, some occasions I vaguely recalled, and many I didn’t remember at all.

But it didn’t matter, because I know this family. I might not remember that particular card game at the camp, but I remember card games. Even the familiar faces are like stranger’s faces now, young and smooth, and I see things in them that I was too young to have noticed back then. I wonder who took the photos and why. And the experience rips out my heart and makes me sob with the nostalgic loss of it all.

Lesson learned: pictures of Bon Jovi on stage, unimportant and unnecessary; pictures of me and my sister at the Rolling Stones concert, not a bad idea; but pictures of everyone in my family during Christmas at my parents’ house … absolutely vital.

Kellie Underhill has been the Editor of Bread ‘n Molasses since its inception in 2003. A member of the Writers’ Federation of New Brunswick where she once sat on the Board of Directors, Kellie particularly enjoys working with writers at the beginning of their careers to help build their skills and even more importantly, their confidence.