Miramichi Fishing Report for Thursday, May 9, 2013

As we move into May, the spring salmon are pretty well gone as anglers turn their attention to Striped Bass and Trout.  By this time next week (May 15) lakes and  ponds in the Miramichi drainage will be open.

With the new bass season, anglers are reminded to keep all areas free of litter and to respect the species and practice correct release.  If rules and common sense are not followed, we could lose the season people fought so hard to get for us. 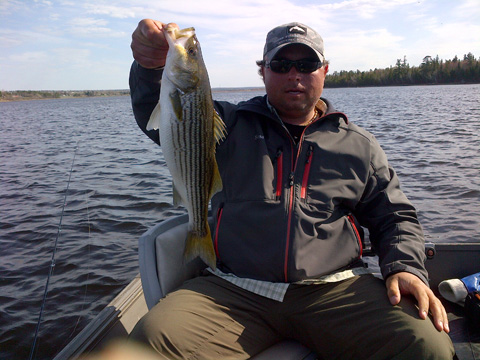 Bass caught by Derek Munn, one of the many landed on rabbit strips and marabou patterns.

W. W. Doak and Sons in Doaktown said there were still some spring salmon around as they have been seen jumping as they drop down-river.  However, they are extremely hard to catch.  Anglers have been picking up some trout in the 14-15 inch range.  Water levels are getting down, and a good rain would be appreciated, but levels are still good for the time of year.  It is the “in-between season” there as spring salmon are pretty well over and the sea trout are yet to arrive.  Anglers generally look for the sea trout from mid May on. Fiddleheads should soon be on the menu.

Flies of choice were Muddlers, Black Woolly Buggers, and small dry flies such as the Wulff patterns.

Derek Munn of Ledges Inn in Doaktown and Mountain Channel in the Rapids area said they were averaging 3-5 spring salmon a day until this week when they pretty well wrapped up that season.  There were some trout reports, but nothing of any size.  The water conditions were good for the time of year, but a god rain would certainly help.  They had even joined anglers in the |City of Miramichi in angling for striped bass.  There were reports of some 20-pounders being hooked and released.  Munn and his guest were actually fly-fishing for them and did pick up a couple in the seven to 10 pound range.

Flies of choice were dark Marabous.

Herb Barry Sr. of Herb’s Fly Shop on the Station Road in Blackville said angling for spring salmon was very slow with that season pretty well coming to a close, as anglers were working quite hard to pick up the odd fish here and there. Over all, there had been very few spring grilse hooked, although the salmon numbers were decent.  The water was in decent shape, but dropping fast.  A good rain was needed for both the rivers and the fire situation.  The big river rush was over now for about three to four weeks as anglers await the bright salmon season.  There were reports of decent trout numbers in the 12-14 inch range.

Flies of choice were smaller streamers in Black Ghosts, Mickey Finns and Renous Specials along with some Muddlers.

Curtis Miramichi River Outfitting in Blackville said the  spring salmon season was just about over.  There were still some fish around, but they were very hard to get.  There were some trout, but not hoards.  They did hear a report of a six-pounder being caught.  Canoeing conditions were very good.  The water was down, but a good rain is needed.  Curtis Miramichi Outfitters will be holding their Fly Fishing Schools.  The first session is this Saturday, and runs from about 8:30 to 4 p.m.  Cost is $95.00 a person, young or old.  They plan to offer these every second week.  Check with them for dates.  They can accommodate about eight per class.  Those in attendance are instructed in both fly tying and casting as well as other hints and information about salmon angling.  All equipment is provided.  They also offer separate courses on spey casting.

George Routledge of George’s Fly Shop at the Mouth of Renous in Quarryville said angling there was very slow with very few spring salmon being caught and not many trout.  The water was perfect, but dropping quickly, and a good rain was needed.

Jim Laws of Miramichi Hunting and Fishing in Newcastle, Miramichi reported a few spring salmon and added that the striped bass angling was very good.  He added that it was good to see so many people, young and old, making use of the river.  There were some big bass in the 15-pound range reported.  He had not received any trout reports.

Flies of choice were Renous Specials, Black Ghosts and Muddlers.

Syd Matchett of Trout Brook Fly Shop on the Northwest Miramichi said angling for spring salmon was fair, but most anglers were going out  for bass in the lower sections near City of Miramichi and below the Red Bank Bridge.  There were some nice trout with a three-pounder reported

Flies of choice were Golden Eagle in 2.0 and 3.0 sizes along with some Black Ghosts, Blue Smelts and Silver Smelts.

Debbie Norton of Upper Oxbow Outdoor Adventures on the Little Southwest Miramichi said spring salmon had been good for a couple of weeks, but was tapering off.  There were still a few jumping.  There were no bright trout yet, and very few trout over all.  Smelts were in big-time and the smolts had started their run out to sea.  Many anglers were fishing Striped Bass, and she asked that people respect the species and take care in releasing them.

So with the season moving to Striped Bass and Trout, it is time to get out and  “on the water”.

The striped bass fishery opened on Wednesday May 1st with a retention of one fish allowed per day until May 15th. After that it will be hook and release. We had our first striped bass for supper last night – filleted, little egg and cracker batter, fried in olive oil – it was delicious. I had been told to be sure to remove the red “meat” – stripe of red down the side of the fillet – as it may spread a bitter taste to the fish – and I read it as well when researching online how best to cook. The size slot is narrow for what you are allowed to keep (55 – 65 cm) and many smaller and larger are being caught and released but lots of legal fish are being taken as well. I am definitely a fan.

DFO Officer Kendall Sturgeon brought me the attached picture of a young boy with his first striped bass. He brought it to the officers and asked if he could keep it. They helped him tie it to his bike and he drove it home – very proud. The picture was taken at Strawberry Marsh in Newcastle. The officers reported people catching between 5 and 30 fish each during these first few days. The weather is going to be great the next week so grab your fishing rod and get out there. 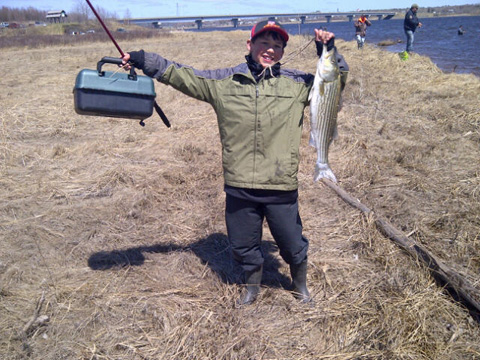 The MSA appeared in a lot of press this past while.

A reporter from the Gleaner interviewed Jerry Doak, Dan Bullock and Keith Wilson, along with anglers staying with Keith and some fishing at the Doaktown Bridge. The full story can be found at http://www.miramichisalmon.ca/the-lore-of-miramichi-draws-hundreds/

Rodney Colford’s article in the Moncton Times & Transcript reports on how fishing is going on the Southwest Miramichi going into the third week of the season.  http://www.miramichisalmon.ca/fishing-remains-decent-on-miramichi/

And last but definitely not least the Bathurst Northern Light reported on funding the MSA will be receiving this year from the Atlantic Salmon Conservation Foundation. We will be receiving $12,000 from the Foundation for use of satellite tag technology to monitor kelt movement and water temperature preferences from the Miramichi River through the Gulf of St. Lawrence. Without funding from organizations like this our field season would not happen.
http://www.miramichisalmon.ca/atlantic-salmon-conservation-foundation-funds-projects/

I would also like to thank the New Brunswick Wildlife Trust Fund who have funded us again this year. The MSA will be receiving $6,775 to help carry out the kelt tracking program, $14,000 to go toward the Northwest Miramichi smolt program and $10,000 toward our electrofishing program (juvenile assessment). For information on these and our other field programs go to http://www.miramichisalmon.ca/programs/ and also check out the Programs menu items. 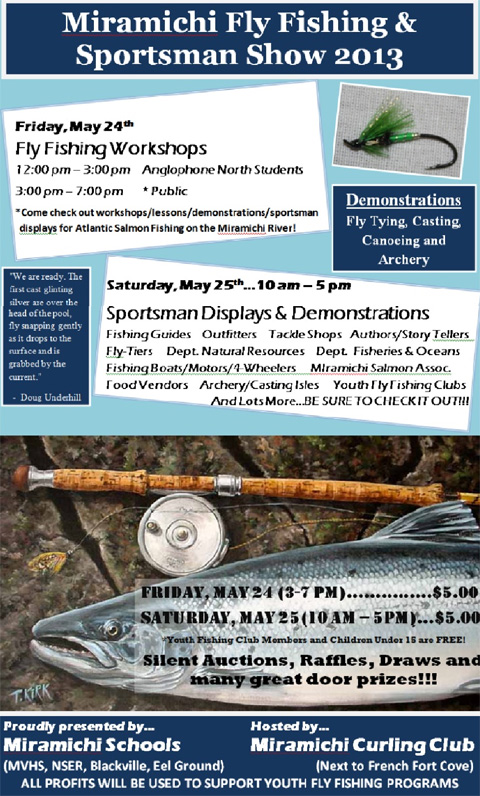 Hello Doug:
I have attached some images that may be of interest to you. These images (geotagged) were taken yesterday afternoon on the Bay du Vin River. We were involved in a habitat assessment, Atlantic salmon potential, of the river and came across the two structures. They appear to be constructed from sandstone blocks and given their scale it may have been a bit of an undertaking to construct.
Good day,
Vladimir King Trajkovic, EPt 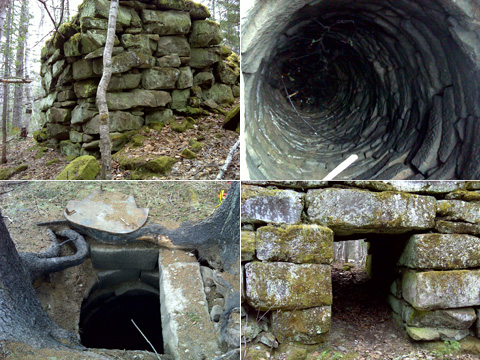 Getting Out Word on Need for Sustainable Aquaculture
~~~~~~~~~~~~~~~~~~~~~~~~~~~~~~~~~~~~~~~~~~~~~~~~
An article entitled “Gloves Come Off in Salmon Wars” examines how an original vision of sustainable aquaculture has turned into an industry where growth is paramount, and large impacts on the environment have led to a need to rethink its future. Views include those of ASF’s Sue Scott and ACAR’s Matt Abbott:
http://www.asf.ca/gloves-come-off-in-salmon-wars.html

NY Times Looks At ISA Issue on West Coast
~~~~~~~~~~~~~~~~~~~~~~~~~~~~~~~~~~~~~~~~~~~~~~~~
It is always interesting when the NY Times turns its attention to salmon issues. In this case it not only provides an update of BC’s situation, but looks at steps being taken to identify the lethal salmon virus in Alaska, Washington and Idaho:
http://asf.ca/scientists-divided-on-isa-threat-in-pacific-nw.html 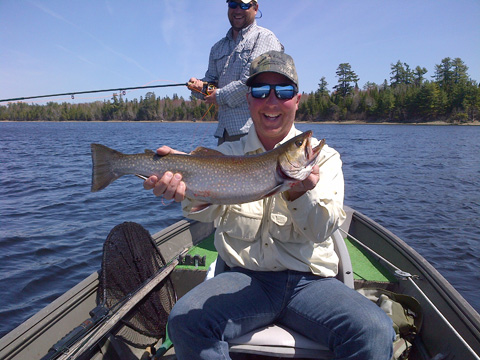