There is certainly lots of water in the system, which is a positive for the fish as August is often plagued by low water and warm temperatures.  Even if the water height is a tad high in some places, it is generally fishable.  There are decent numbers of fish being seen, but they are not easy to catch.

Reports from the Northwest and Dungarvon barriers as of August 4 are up from the same time last year.

The Northwest Barrier had 192 salmon compared to 117 last year, while the grilse numbers were 133 this year and 108 last.

Doug White’s Tammerack Sports Fly Shop in Juniper said once again the high water has chased fishermen to the porch causing the long weekend to be a bust. Conditions were coming along great but then we got another rain. If the weather holds, water heights will be perfect for the weekend.

Flies of choice: With the small amount of people out it’s difficult to say what are the flies of choice but when the waters recede it will be business as usual.

W. W. Doak and Sons in Doaktown said river conditions were very good, especially for August.  The water was holding its height there, but was a tad high from the Cains River down, although it was fishable.  The temperature of the water was in the low 60s Fahrenheit.  Anglers were seeing fish, but they were not taking well, although decent numbers were being caught with a good mix of salmon and grilse.

One angler who had dropped into the shop on his return from camps on the Northwest Miramichi said fishing was the best he’d had in years, while Crown Reserve from the same general area were mixed.

Flies of choice were Bear Hairs, Undertakers, Glitter Bears and White-tailed Green Machines on no. 4 & 6 hooks.

Derek Munn of Ledges Inn in Doaktown and Mountain Channel in the Rapids area said the fishing has been fair.  They are catching 5 or 6 fish a day mostly salmon, and have been getting a few fresh with sea lice. The water is a little high but no complaints for this time of year. Water temperature was down to 59 Fahrenheit here Tuesday morning, so all is good. 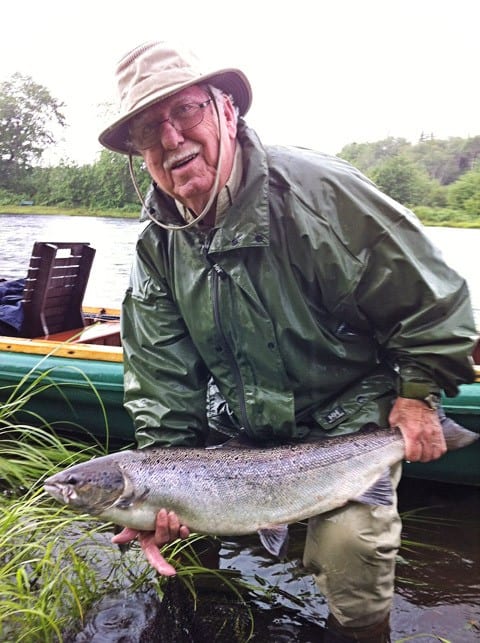 Flies of choice were bigger bright patterns like the Ally Shrimp and Marabou patterns.

Herb Barry Sr. of Herb’s Fly Shop on the Station Road in Blackville said there was lots of water and lots of fish, but they were hard to catch.  The Howard area and above had very good water levels, but below that the water was high and anglers had to be careful when wading.  Bench Pool had fished well.  Anglers were catching most fish in the afternoons, rather than the usual prime time times.

Flies of choice were White-tailed Green Machines, Green Rats, Green Cossebooms and Bear Hairs, but in general anything green.

Curtis Miramichi River Outfitting in Blackville said there were good numbers of fish around, but they were not taking well.  The water there was still a tad high, and most were fishing from boats.  Canoeing conditions were great and “you came at least watch the fish jump even though they aren’t taking”.

George Routledge of George’s Fly Shop at the Mouth of Renous in Quarryville was unavailable for comment, but hopefully will be back at his post next week.

Jim Laws of Miramichi Hunting and Fishing in Newcastle, Miramichi reported lots of water with some salmon and grilse being caught, but in no great numbers.  The water temperature was good.

On the Striped Bass front, not very many were being caught in the hot areas for spring fishing as most bass had dispersed after spawning.  Other area of the Gulf of St. Lawrence should have better fishing than the Miramichi at the moment.  Generally the bass return here later in the Fall.

Syd Matchett of Trout Brook Fly Shop on the Northwest Miramichi said there had been some good mornings and evenings, but generally fishing was slow.  With the first raise of water, fish were moving from holding pools and were a bit copper-coloured along the belly, but there were a few fresh one here and there, but no onslaught.  Retention above Wayerton Bridge came into effect August 1.  Generally Striped Bass fishing was slow.

Debbie Norton of Upper Oxbow Outdoor Adventures on the Little Southwest Miramichi said there was lots of water and the temperature of it was good, but one had to fish hard to do any catching.  Paul Elson Jr. did pick up two grilse on the weekend and Howie Gould one.

Fly of choice was the Carter’s Bug.

Long range forecasts were for some rain Friday, but then a long sunny stretch, so the high water is an August blessing.  Gradually as the rivers drop off a bit, it will be time to get out and “on the water”.

Thought for the Week: “Fish die belly-up and rise to the surface; It is their way of falling”… Andre Gide

Also, an interesting radio broadcast on the subject with ASF’s Bill Taylor
http://www.asf.ca/concerns-about-increasing-isa-on-nl-south-coast.html 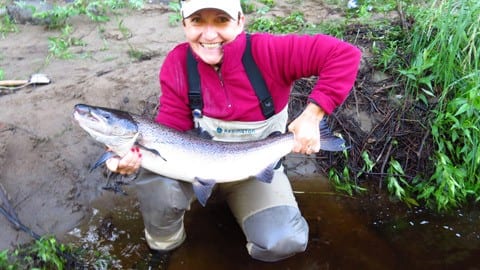 I have caught a nice salmon, not sure the weight, on the Cain River last Friday on a green machine.  My third salmon.   My husband says is could be around 15 pounds.   My husband also caught one on the Cains River on a Shady Lady last Thursday.
Al & Nora LeBlanc 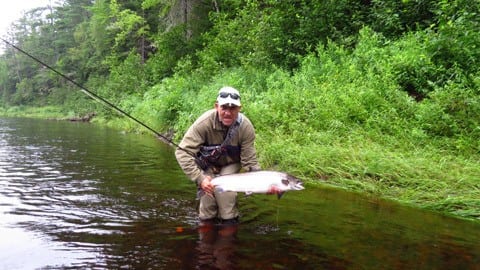