Skip to content
Connect with us:
FacebookTwitterInstagram
October 12, 2005/Giv'er Miramichi/Be the first to comment/General Interest 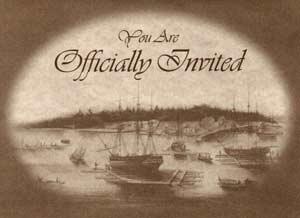 On behalf of the City of Miramichi, Parks Canada, Mormon Historical Sites Foundation, The Friends of Beaubears Island and The Church of Jesus Christ of Latter-day Saints, we invite you to a ceremony and plaque dedication commemorating a prominent citizen of Miramichi, Joseph Russell.

Joseph Russell was a successful shipbuilder and respected citizen in the early part of the nineteenth century. He owned and operated a shipbuilding enterprise on Beaubears Island. While living there he had the remains of seven of his children buried on the island. Joseph Russell had a stone tomb constructed to guard the burial site before his departure from the areas. The tomb is the only building which still stands as one witness of the many chapters of Beaubears Island History.

Joseph Russell went on to become a famous Mormon financier, dedicating a great portion of his wealth in support of the church. To read more about Joseph Russell and the dedication visit the Mormon Historic Sites Foundation.