As the season enters the final few days, there are good numbers of fish in the system.  Generally, the catching has been difficult in most places, but there are some exceptions, and water conditions have been good.  With the season closing for the majority of rivers by Saturday’s end, there are only a few which remain open until October 29.  These are the Bartibog, Burnt Church and Tabusintac Rivers.

W. W. Doak and Sons in Doaktown said angling was moderate with some anglers hooking fish on Tuesday, while others were not so lucky.  Water conditions were good. 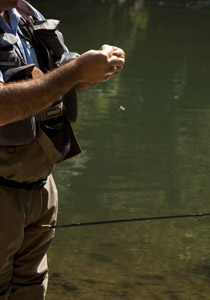 However, the fish are there to be caught, but at this time of year, they have turned their attention to other matters.  Even the anglers who were not having success this past week have been moved into the reflective mode, pondering how great a season it has been.

Flies of choice were General Practitioners, Ally’s Shrimps, Same-Thing-Murrays, Undertakers, Bugs, Bear Hairs and some Bombers as well as Maribous.

Derek Munn of Ledges Inn in Doaktown and Mountain Channel in the Rapids area said they had been catching fish with 12 caught Tuesday and about the same number on Wednesday, including a 26-pounder.  The Cains River was also fishing well Wednesday.  Water conditions were good and evenings were the most productive.

Herb Barry Sr. of Herb’s Fly Shop on the Station Road in Blackville said there were a lot of fish around Blackville and on the Cains, but they were not taking well, with only the odd one being caught.  Water conditions were good.

Flies of choice were Ally’s Shrimps along with a variety of other Shrimps such as Ally’s Cascades, Tippet Shrimps etc, L. T. Specials and General Practitioners.

Curtis Miramichi River Outfitting in Blackville said there were lots of fish in the river, but they were not taking well, with only a few being caught.  They were some big salmon with one weighing in at 38 pounds.  Water conditions were good, but slightly on the high side.

George Routledge of George’s Fly Shop at the Mouth of Renous in Quarryville said there were lots of fish around, but the fishing was poor.  Wednesday’s angling produced one salmon.  Water conditions were good.
While at George’s, pick my book Salmon Country and Paul Marriner’s new book Modern Atlantic Salmon Flies for sale.  Both are $45.00

Flies of choice were the Fall patterns such as Ally’s Shrimps, GPs, L.T. Specials, White-tailed Green Machines and Shady Ladies.  Generally, the smaller the fly, the better the results.  Some anglers were even requesting size 10 hooks which George does not sell.

Jim Laws of Miramichi Hunting and Fishing in Newcastle, Miramichi reported some fish being caught, but generally in no great numbers.  There were not as many anglers out to report as many have shifted to the hunting mode this time of year.  Water conditions were good.

Flies of choice were White-tailed Green Machines, Shady Ladies and a variety of the traditional Fall patterns.

Syd Matchett of Trout Brook Fly Shop on the Northwest Miramichi had a good report.  He summed up the Fall season as one of the best since he started operating his shop.  Two anglers had hooked and released eight salmon, while Alvin Bell was still doing well.  Fishing seemed to be better in the evening.  Syd said that although Chatham Ironmen catcher Jon Saunders has caught some fish this year, he heard that Saunders has decided to move into a special brand of Fishing: Ear-Piercing.  Rumour has it he is turning salmon flies into earrings, and to demonstrate how easy it is, he pierced his own ear with one on Monday in the wind, and is debating on whether or not to open a franchise.  Syd hopes he does not as he will lose a great customer!  There was no word on the special fly Saunders used to penetrate his ear on Monday.

Debbie Norton of Upper Oxbow Outdoor Adventures on the Little Southwest Miramichi said there were lots of fish around, but they were not showing or taking.  Her six ports had produced only two grilse on Tuesday.  The fish had started to spawn, and perhaps that was the main thing on their minds.  Water conditions were good.

Flies of choice were Maribous in all sizes and colours.

So hopefully we do not get large amounts of rain on Friday which could make the final day a wash-out allowing anglers their finals couple of days “on the water”.

Thought For The Week: “Even eminent chartered accountants are known, in their capacity as fishermen, blissfully to ignore differences between seven and ten inches, half a pound and two pounds, three fish and a dozen fish.”  ~William Sherwood Fox, Silken Lines and Silver Hooks, 1954

HUMOUR:  “Lo the angler. He riseth in the morning and upsetteth the whole household. Mighty are his preparations. He goeth forth with great hope in his heart – and when the day is far spent he returneth, smelling of strong drink, and the truth is not in him.”