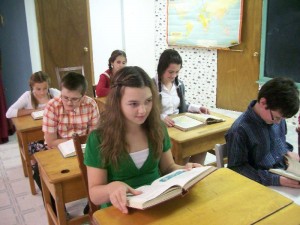 Children at their desks in the Mountain School.

When my mother was a girl she would walk up the road every weekday morning with her siblings and friends to the old Mountain School, a traditional one-room schoolhouse in Gray Rapids on the Miramichi River in New Brunswick. I’ve grown up listening to stories of how children of all ages and grades learned their lessons from a single teacher in one not so very large room, before they were finally sent by bus to the new consolidated school in Blackville. Times were very different back then from when I was growing up and attending the same Blackville School starting in the late 1970′s until I graduated in 1987.

I’ve always wondered what it might have been like to have gone to a little one-room schoolhouse and now, thanks to my aunt and Mom’s sister Valerie Stewart, I need not wonder any longer. Valerie has written a play called “A Mountain School Christmas” which the Heritage Players will perform in a dinner theatre next Friday evening, December 2nd, at the Miramichi Kin Centre in Newcastle as a fundraiser for the Nelson Doyle Dancers to help them raise money for a trip to Ireland. 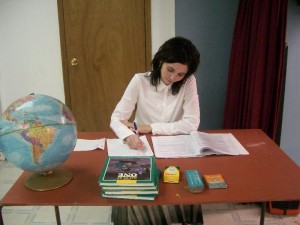 One teacher, played by Christina Donovan, undertakes the teaching of the entire schoolhouse.

Recently I had the opportunity to attend a dress rehearsal of the upcoming performance and based on how much I laughed and enjoyed the few scenes I got to see I’m now very much looking forward to enjoying a traditional turkey dinner with dessert while I get to take a trip back in the past and immerse myself in the full one-room schoolhouse experience during the production next week. Plus the Nelson Doyle Dancers will be on hand to perform as well, which is always a special treat I enjoy and look forward to ever since I first saw these talented girls at an Irish Festival several years ago.

This is going to be a must see event on the river, so grab your tickets if you haven’t already! For more information the official press release follows below.

Dinner Theatre in Miramichi to Raise Funds for Trip to Ireland 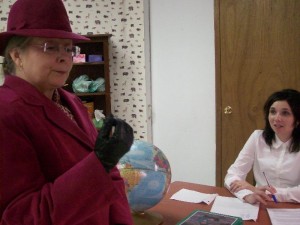 What will happen when one overbearing mother, played by Dorinda Glover, visits the tiny schoolhouse?

The Nelson Doyle Dancers and the Heritage Players have joined forces to present a dinner theatre, “A Mountain School Christmas”, on Friday, December 2, 2011 at the Miramichi Kin Centre starting at 6pm. The evening will include a traditional turkey dinner with dessert, the premiere of the Heritage Players latest production and a performance by the Nelson Doyle Dancers. Tickets cost $25 and are available at Books Inn, Renous Convenience, the Blackville Post Office, by calling Hollie at 627-0181 or Valerie at 843-2849.

At the 2011 Miramichi Irish Festival, the Nelson Doyle Dancers were invited to Ireland by former Mayor of Monaghan, Willie McKenna. The group is slated to leave on August 7, 2012 for a ten day trip which will include performing at various venues and events in and around Monaghan. “The dinner theatre is one of many fundraisers that we are having as we have to cover the cost of our trip. We are very pleased by the support we have received thus far and thank everyone for their generosity,” says Hollie Sturgeon, one of the event organizers. 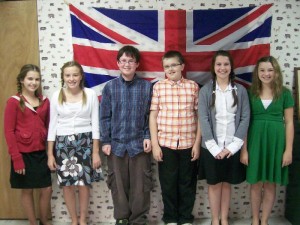 The Heritage Players cast of children star in "A Mountain School Christmas".

“A Mountain School Christmas” is the latest work from Heritage Players’ playwright, Valerie Stewart. When approached by The Nelson Doyle Dancers to write a play, Stewart did not hesitate since her granddaughter, Nora Sturgeon, belongs to the group. “My other play “Grammy Grace” had been well received so I volunteered to write the play, and to direct it as well, a new experience for me,” says Stewart. “The play is set in a one-room school in 1960. It takes place in Gray Rapids, but it could be in any of the one-room schools any where in rural N.B. during the late 50s or early 60s. Unlike Grammy Grace which was mostly true, this play is entirely fictional. Some of my former schoolmates may see themselves in the characters but this is coincidental. I am certain everyone will enjoy the play because there are funny parts, sad parts and lots of singing and audience involvement.” Besides Stewart as the director, the cast includes Emily McCabe, Noah Donovan, Nicole Nash, Nick Hallihan, Sarah Manderville, Laura Sturgeon, Christina Donovan, Dorinda Glover, Jeff Wilson, Bernie Colepaugh and Tammy Manderville.

Both Sturgeon and Stewart encourage everyone to purchase their tickets early as they anticipate a sold out show. “The Nelson Doyle Dancers are wonderful ambassadors for the Miramichi. It is a great honor for the dancers to be asked to go to Ireland and we all should be proud of them,” says Stewart.