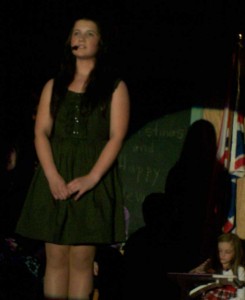 This year my Christmas festivities started early in December when my mother, Pauline, sister, Sherry, and I went to the Kin Centre around the square in Newcastle, Miramichi to attend a special dinner theatre performance.

A local theatre troupe, The Heritage Players, were staging their latest production called “A Mountain School Christmas.” The play was written by my aunt, Valerie Stewart, and it was about celebrating Christmas in 1960 at the one-room schoolhouse in Grey Rapids, NB that my mother and many of her siblings attended when they were children.

We sat at a table with other family members—my aunts, Noreen and Vida; my uncle, Hayward; and my cousin, Lorelei with her husband, Brian. Looking around the room I saw many familiar faces, more aunts and uncles, several cousins and their children, as well as other people from “up home” in the Blackville area.

On a snowy night like that one most people don’t like to drive too far if they don’t have to, but this was a very special occasion. Before the show began when my aunt Valerie, who also directed the production, asked the audience how many of them had attended the Mountain School, hands shot up all over the room. They were part of this history. They had been there, lived it. And I’m sure that’s part of the reason why so many people ventured the 20-30 minute drive into town in less than perfect travel conditions. 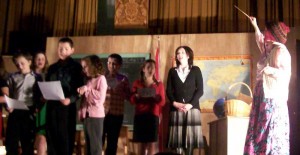 Rehearsal for the Christmas program at the Mountain School.

As the performance began and the characters started to be introduced, my mother tried to remember if this or that had ever really happened or speculated who the characters might be based upon in real life. She remarked about different aspects of the set that she recalled had been in the original schoolroom. For her this seemed to add an extra level of enjoyment; she noticed little details that the average viewer would probably overlook and they filled her with a happy nostalgia.

But you didn’t need to go to the Mountain School, or indeed any of the other one-room schoolhouses that used to dot our little province, in order to enjoy the play. I laughed so hard at times that tears rolled down my cheeks. At one point I was worried I wouldn’t be able to stop laughing and I’d have to excuse myself to regain my composure. And even though the larger consolidated school was the only school I ever knew personally, I was also moved to nostalgia. Times were much simpler even in the late 70′s and 80′s when I was a young student. I could relate to rehearsing for a school Christmas program and hoping your mother might attend. 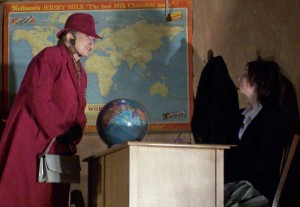 I won’t divulge any more details about the plot on the chance that you might get to see it one day. There currently are no plans that I know of to put it on again, but I hope they will. It deserves to be seen by a greater audience. It’s an important part of our heritage. And I know so many people who were unable to see the sold out show would enjoy it tremendously.

So why put in all the time and energy required to mount a successful dinner theatre for a one night only performance? As entertaining and tasty as the play and turkey dinner were, the reason for the whole production in the first place was the most important part of the evening for me. The event was a fundraiser for the Nelson Doyle Dancers.

The Nelson Doyle Dancers have been performing Irish dance on the Miramichi for 21 years. The group is a large one, consisting of girls and boys from age five to adult. Under the instruction of Ellen (Doyle) MacDonald, students do not pay a fee for their lessons but they are dedicated, practising sometimes many times each week. 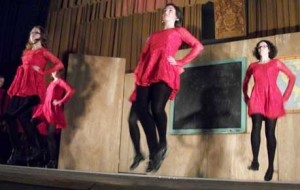 A couple of the Nelson Doyle Dancers mid-air.

The group has been invited to Monaghan, Miramichi’s twin city in Ireland, to perform at several festivals there. For a Canadian group to be invited to Ireland to perform Irish dance is both a tremendous honour and also a testament to their incredible talent. But the cost of such a trip for a large group is considerable, so the dinner theatre was one of many fundraisers they will undertake in order to make the trip possible in August. I hope they’re able to raise the money. It’s such a wonderful opportunity for them to showcase their skills on an international scale. Should you come across any of their other fundraising endeavours, please show them your support. It is needed and well deserving.

To top off an already perfect evening some of the Nelson Doyle Dancers took the stage and showed us why the former mayor of Monaghan, Willie McKenna, extended the invitation in the first place. If you’ve never seen the group in action before, I urge you to seize your next available opportunity to do so. Words can’t begin to describe their talent or the feeling it evokes in the audience. 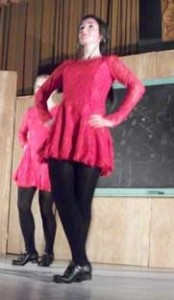 There’s something about the beating drums and singing fiddles as dozens of feet furiously pound the stage before taking graceful flight in simultaneous leaps, spins and kicks that seems to call to the very core of my being. I can’t dance with them. I don’t know the steps and am probably too clumsy to execute them even if I did, but watching the performance I felt the Irish dance deep down in my soul. The experience took my breath and this time when tears sprang to my eyes it was because I was overcome with emotion. I sat there thinking, “This is my people, my dance. This is my heritage.” And this wasn’t the first time I’ve seen the Nelson Doyle Dancers. I’ve been to other performances before, and each time I have this indescribable experience of being “home”.

Maybe if half your blood isn’t Irish as mine is, maybe if your family’s roots don’t stretch as far back into the earth of the Miramichi as its first settlers like mine does … maybe then the experience would be less … magical … but I hope not. I think everyone must feel the powerful connection to art of the dance, if not to the heritage itself.

Overall, Christmas 2011 had its high points for me, but they were few and far between. Personally, I had one of those particularly challenging holiday seasons that I’m quite happy to finally be through with and on to other things. But way back on December 2nd, back at the Kin Centre surrounded by family, friends and neighbours, laughing until my sides hurt at a play that took me back to simpler times, enjoying my first taste of turkey for the year, feeling my heart swell with pride as it kept beat with the Celtic drums and followed the flying feet of the dancers onstage … back then the Christmas season had just begun and it held all the promise of being as gloriously wonderful as that first night. That is a memory I will cherish for years to come and think of fondly during future holiday seasons to immediately transport me back “home” and into the Christmas spirit.

Kellie Underhill is the Editor of Bread ‘n Molasses magazine. Her non-fiction and fiction writing have been published in newspapers and magazines across Atlantic Canada, as well as in Ireland.