May 13, 2012/Giv'er Miramichi/Comments Off on Grammie’s Back/Arts & Entertainment, Community & Fundraising 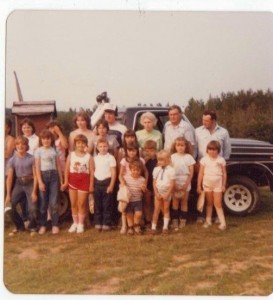 A grainy memory from one of the first Coughlan family reunions in Gray Rapids, NB.

Grammie’s Back
by Kellie Underhill

When I was a kid I would often go and stay all night or even a week at my grandparent’s house in Gray Rapids. This was my exotic summer vacation on the farm. The kitchen seemed really big to me then, though it must have only seemed that way because I was so small. This was before all the renovations, before any additional pieces were built-on. Back in the days of collies and outhouses.

I see Grammie at the sink doing dishes, looking out the window at the river and the cars passing on the road. I see her at the counter kneading a big pile of dough, her hands covered in flour to her elbows, her arms so strong as she whipped the bread into the pans. I see her at the refrigerator in the corner getting me a glass of milk from a bottle that Grandad and I walked to the bottom of the hill to pick up earlier that morning. I see her at the wood stove, adding a stick to the fire, heating the kettle, cooking the supper, baking the bread. I see her moving across the floor with a straw broom, sweeping vigorously, banishing the dirt to the outside.

I spent a lot of the time sitting in the kitchen, at the table waiting for meals to be laid, or on the cot by the window pretending to take a nap, staying out of Grammie’s way and watching her work. How many days have I spent staring at Grammie’s back? I see the back of a housedress, the kind you slip over your head with one button at the neck. I see broad shoulders, thickness through the hips and thighs, ankles that look swollen, apron strings tied in a big bow with ends dangling down her backside.

I remember sitting at the back of the kitchen table next to the wall in a seat not reserved for the people who lived there. That was important to me, not to steal Preston, Danny, or Marilyn’s favourite seat. My uncles and aunt, still children themselves, teens and tweens. Although the boys probably wouldn’t have cared where I sat, Marilyn might have teased me or invented terrible stories to scare me. She could be very creative when she was bored, once telling me that the black soot on our chimney meant the house was on fire and my parents would surely burn up. Meanwhile Preston coddled me and Danny pretty much stayed to himself. Nevertheless I would sit in a seat at the kitchen table that in my mind was reserved for guests.

I see Grammie setting the table. Plates, cutlery, glasses, mugs for tea … something my mother never did. At home we pulled the plates out of the cupboard, served the food at the stove and then delivered the steaming plates to the table. But Grammie always set the table, filling the centre with some of the best food I’ve ever eaten. Stacks of sliced home-made bread, cold roast sliced thick, serving bowls filled with warmed-up potatoes, turnips and hot meat fried with onions.

There would also be plates filled with sugar cookies or slices of molasses cake or even a whole blueberry pie. Something sweet was an essential ending to any meal. I see a feast on the table and it’s only lunchtime, the same meal where at home I might have a peanut butter and jam sandwich with a glass of cherry kool-aid.

Grammie delivered the food to the table and I would be too shy to eat even though everything smelled so good and I was so hungry. Grandad would help me, transferring a little of this and a little of that to my plate, even as I blush and hang my head. Sometimes there’s company for dinner and sometimes it’s just the three of us — me, Grammie and Grandad. Regardless of who is there, the table is set properly.

Grandad and I eat. Grammie must eat too of course, sometime, but I can’t ever remember seeing her sit down at the table with us to do it. She never joined the table, never sat still, didn’t even speak much but quietly continued the business of the kitchen — cooking, tending the fire, baking, cleaning, keeping her family sustained.

The kitchen was the centre of that house, the heart of the universe as far as I was concerned, and she the source of its strength.

My grandmother, Grammie Coughlan, passed away on Sunday June 19th, Father’s Day. I’ll never be even half the woman she was in the kitchen or the force she was in her home.

Kellie Underhill has been the Editor of Bread ‘n Molasses magazine since its launch in February of 2003. A member and former Board of Director of the Writers’ Federation of New Brunswick, her essays and fiction short stories have been published in numerous newspapers, magazines and reviews in Canada and Ireland.